Puberty is an unlikely topic for a beekeeping journal, but it is a special time in any organism’s life, and I’ll do my best to keep this professional.

Before puberty, an organism invests its resources in two areas: survival and growth.  Once an organism begins to also invest in reproduction, puberty begins. Sure, that 13-year-old boy with a cracking voice probably isn’t producing sperm and fathering children, but he certainly is on his way. It’s a critical developmental transition that all organisms undertake, even colonies of honey bees. 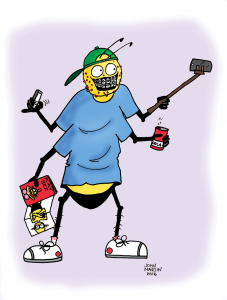 What does puberty in a honey bee colony look like? A fully reproductive honey bee colony is a hermaphrodite, capable of reproducing by producing males (drones) or females (swarms).  Mature drones are produced before swarms, so to determine the very first investment in reproduction, we have to go back to the very first stage of producing a drone. And what’s that? Yes, it’s our favorite comb, those large cells of drone comb. When workers build drone comb, it’s the equivalent of the colony going through puberty.  Even if the colony might not use the drone comb for rearing drones until the following year, the specialized cells are a sign that reproduction is somewhere on the horizon.

Feel free to take a minute here and think about which parameter you think would trigger a colony to build drone comb. I’m sure you have lamented the zeal with which bees seem to build drone comb wherever they can, and you might have also noticed that the largest colonies built drone comb with the most fervor. But remember that “large” encompasses many parameters, so what part of “large” really matters? To be perfectly honest, any of the parameters were plausible, or even a combination of the parameters. Once we amassed the data, however, we found that increasing the number of workers was the only parameter that led to an increase in the proportion of drone comb built. Furthermore, if we increased the number of workers in all the treatment groups, there was no additional drone comb built even if the colony also had more worker comb, worker brood, or honey stores. We had a solid answer: the colony parameter that induces a colony to switch from building worker comb to drone comb is the number of adult workers (Smith et al 2014).

What does this mean? First off, it’s cool! The workers are somehow detecting the number of other workers in the colony. If that number is over a size threshold, then the workers begin building drone comb. As with most research, answering one question raises more questions. Why use worker number to trigger puberty? If I can speculate a bit, this might be because the number of workers in a colony is the most reliable currency that a colony has for detecting that it can afford to invest in future reproduction. Worker number is intricately linked to other important metrics of colony survival, such as the amount of honey a colony can store before Winter. Therefore, colonies that do not have enough workers to adequately survive and grow cannot invest in reproduction.  But how exactly does one bee “know” how many other bees are in her colony?  Right now, I have no idea, but investigating that mystery is the next stage of my PhD. Stay tuned.

If you would like to read more about this project, please check out the full publication (references below).  If you’re unable to obtain a PDF of the article, please get in touch.  I know a guy who knows a guy.