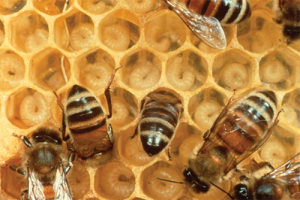 Honey bees collect distinct nutrient sources in the form of nectar (energy) and pollen (nitrogen). Fewell and Winston (1996) investigated the effect of varying energy stores on nectar and pollen foraging. They found no significant changes in nectar foraging in response to changes in honey storage levels within colonies. Individual foragers did not vary activity rates or nectar load sizes in response to changes in honey stores, and colonies did not increase nectar intake rates when honey stores within the hive were decreased. This result contrasts with pollen foraging behavior, which is extremely sensitive to colony state. Their data show that individual foraging decisions during nectar collection and colony regulation of nectar intake are distinctly different from pollen foraging.

Honey bee workers from small colonies collected more syrup in cages and more nectar in the open when a caged queen was present in the hive than when no queen was present. Free-flying colonies containing larvae but no queens collected more nectar than similar colonies provided with an alcoholic extract of larvae and their food. When nectar was available, free-flying colonies with queens had more incoming bees per four minutes and more pollen carriers per four minutes than colonies without queens but with larvae or brood extracts. When nectar was not available, queenless colonies with larvae had the greatest number and percent of pollen foragers of all treatments. Extracts of larvae and their food appeared to increase both nectar and pollen foraging in the presence of a queen. However, the response was not always clearly evident, and the pheromone responsible was not identified. When nectar was freely available, foraging bees apparently collected pollen incidentally to nectar collection, thereby creating the appearance of a direct influence by the queen on pollen collection. However, in the absence of available nectar, when pollen was also less readily available, larvae exerted more influence on pollen collection than did the queen (Jaycox 1970). 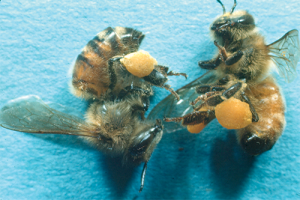 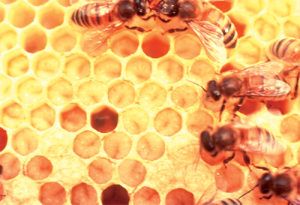 Forager honey bees function not only as gatherers of food for their colonies, but also as sensory units shaped by natural selection to gather information regarding the location and profitability of forage sites. They transmit this information to colony members by means of waggle dances. To investigate the way bees transduce the stimulus of nectar-source profitability into the response of number of waggle runs, Seeley (1994) performed experiments in which bees were stimulated with a sucrose solution feeder of known profitability and their dance responses were video recorded. The results suggest that several attributes of this transduction process are adaptations to enhance a bee’s effectiveness in reporting on a forage site. 1)Bees register the profitability of a nectar source not by sensing the energy gain per foraging trip or the rate of energy gain per trip, but evidently by sensing the energetic efficiency of their foraging. Perhaps this criterion of nectar-source profitability has been favored by natural selection because the foraging gains of honey bees are typically limited by energy expenditures rather than time availability. 2)There is a linear relationship between the stimulus of energetic efficiency of foraging and the response of number of waggle runs per dance. Such a simple stimulus-response function appears adequate because the range of suprathreshold stimuli (max/min ratio of about 10) is far smaller than the range of responses (max/min ratio of about 100).  Although all bees show a linear stimulus-response function, there are large differences among individuals in both the response threshold and the slope of the stimulus-response function. This variation gives the colony a broader dynamic range in responding to food sources than if all bees had identical thresholds of dance response. 3)There is little or no adaptation in the dance response to a strong stimulus (tonic response). Thus each dancing bee reports on the current level of profitability of her forage site rather than the changes in its profitability. This seems appropriate since presumably it is the current profitability of a forage site, not the change in its profitability, which determines a site’s attractiveness to other bees. 4)The level of forage-site quality that is the threshold for dancing is tuned by the bees in relation to forage availability. Bees operate with a lower dance threshold when forage is sparse than when it is abundant. Thus a colony utilizes input about a wide range of forage sites when food is scarce, but filters out input about low-reward sites when food is plentiful. 5)A dancing bee does not present her information in one spot within the hive but instead distributes it over much of the dance floor. Consequently, the dances for different forage sites are mixed together on the dance floor. This helps each bee following the dances to take a random sample of the dance information, which is appropriate for the foraging strategy of a honey bee colony since it is evidently designed to allocate foragers among forage sites in proportion to their profitability.

should exhibit a greater work effort for pollen

from colonies with low brood quantities.”

Hydrocarbons emitted by waggle-dancing honey bees are known to reactivate experienced foragers to visit known food sources. Gilley (2014) investigated whether these hydrocarbons also increase waggle-dance recruitment by observing recruitment and dancing behavior when the dance compounds are introduced into the hive. If the hydrocarbons emitted by waggle-dancing bees affect the recruitment of foragers to a food source, then the number of recruits arriving at a food source should be greater after introduction of dance compounds versus a pure-solvent control. This prediction was supported by the results of experiments in which recruits were captured at a feeder following introduction of dance compounds into a hive. This study also tested two nonexclusive behavioral mechanism(s) by which the compounds might stimulate recruitment; 1)increased recruitment could occur by means of increasing the recruitment effectiveness of each dance and/or 2)increased recruitment could occur by increasing the intensity of waggle-dancing. These hypotheses were tested by examining video records of the dancing and recruitment behavior of individually marked bees following dance compound introduction. Comparisons of numbers of dance followers and numbers of recruits per dance and waggle run showed no significant differences between dance-compound and solvent-control introduction, thus providing no support for the first hypothesis. Comparison of the number of waggle-dance bouts and the number of waggle runs revealed significantly more dancing during morning dance-compound introduction than morning solvent-control introduction, supporting the second hypothesis. These results suggest that the waggle-dance hydrocarbons play an important role in honey bee foraging recruitment by stimulating foragers to perform waggle dances following periods of inactivity.

To investigate the distances at which honey bee foragers collect nectar and pollen, Couvillon et al. (2015) analysed 5,484 decoded waggle dances made to natural forage sites to determine monthly foraging distance for each forage type. Firstly, they found significantly fewer overall dances made for pollen (16.8%) than for non-pollen, presumably nectar (83.2%). When they analyzed distance against month and forage type, there was a significant interaction between the two factors, which demonstrates that in some months, one forage type is collected at farther distances, but this would reverse in other months. Overall, these data suggest that distance, as a proxy for forage availability is not significantly and consistently driven by need for one type of forage over the other.

The honey bee time memory enables foragers to return to a profitable food source in anticipation of the time of day at which they previously collected food from that source. The time memory thus allows the costs associated with having to rediscover it. A portion of a foraging group (the persistent foragers) will explore a previously profitable source and may do so for several days. The remaining bees (the reticent foragers) await confirmation of availability before revisiting the source. Recent work has shown that both persistent and reticent bees make extracurricular flights to alternative sources when one food source ceases being productive. Little else, however, is known about reticent foragers.  Van Nest et al. (2016) determined that reticent bees congregate near the hive entrance in anticipation of the learned foraging time as do persistent foragers. They also confirmed that the food-anticipatory clustering takes place on the waggle dance floor, as suspected, but also found differences in the number of days that persistent and reticent foragers continue clustering.  Finally, they found that persistent foragers had significantly more rewards per day at the source than did reticent foragers, supporting the hypothesis that experience at a food source influences a forager’s decision to become either persistent or reticent. Their findings demonstrate that persistence and reticence are not immutable characteristics of foragers themselves but rather strategies they employ toward different food sources.

Honey bees are important pollinators, requiring floral pollen and nectar for nutrition. Nectar is rich in sugars, but contains additional nutrients, including amino acids. Hendriksma et al. (2014) tested the preferences of free-flying foragers between 20 amino acids at 0.1% w/w in sucrose solutions in an artificial meadow. They found consistent preferences amongst amino acids with essential amino acids preferred over nonessential amino acids. The preference of foragers correlated negatively with amino acids induced deviations in pH values, as compared to the control.  Next they quantified tradeoffs between attractive and deterrent amino acids at the expense of carbohydrates in nectar. Bees were attracted by phenylalanine, willing to give up 84 units sucrose for one unit of amino acid. They were deterred by glycine, and adding 100 or more units of sucrose could resolve to offset 1 unit amino acid.  In addition, they tested physiological effects of amino acid nutrition on forager homing performance. In a no-choice context, caged bees showed indifference to 0.1% proline, leucine, glycine or phenylalanine in sucrose solutions.

Furthermore, flight tests gave no indication that amino acid nutrition affected flight capacity directly. In contrast, low carbohydrate nutrition reduced the performance of bees, with important methodological implications for homing studies that evaluate the effect of substances that may affect imbibitions (assimilation) of sugar solution. In conclusion, low amino acid concentrations in nectar relative to pollen suggest a limited role in bee nutrition. Most of the 20 amino acids evoked a neutral to a mild deterrent response in bees, thus it seems unlikely that bees respond to amino acids in nectar as a cue to assess nutritional quality. Nonetheless, free choice behavior of foraging bees is influenced, for instance by phenylalanine and glycine. Thus, amino acids in nectar may affect plant-pollinator interactions and thereby exhibit a selective pressure on the flora in the honey bee habitat.