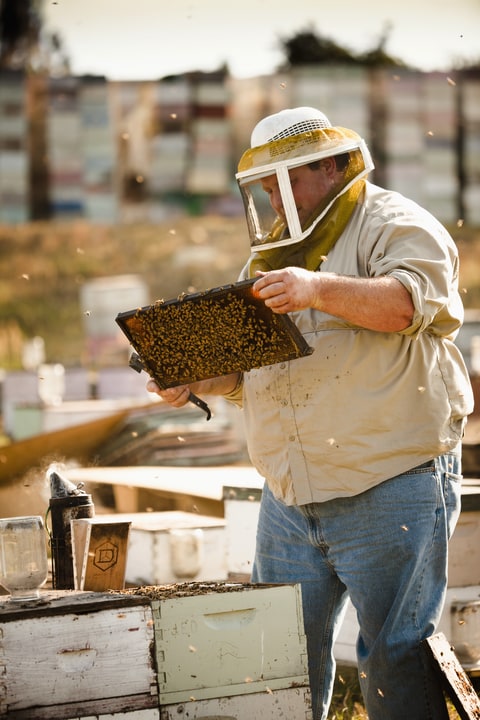 FORT MEADE — Jim Doan pats the bees gently with the flat of his big palm. Without acrimony, the nurse bees and worker bees amble toward the edges of the frame, revealing the larvae underneath. They are fat and pearly, the way they should be. Doan’s bees may be turning the corner, but it’s too early to say. He has lost 300 hives this spring and added 500, netting 200 the hard way.

He slides the frame back into the wooden super, the name for the basic beehive box, and fits the cover on. He’s getting ready to go, moving his bees from their wintering Florida home back to upstate New York. The bees get stressed on the road — he’s got to keep the trucks moving and drive through the night. But this is a minor worry in the scheme of things.

Doan’s bees are in trouble.

Concerned citizens have read about colony collapse disorder; they may have even heard about varroa mites and the staggering statistic that something is annually killing 30 to 40 percent of bees in the US. We know honey bees are under siege. But Florida honey bees are in even bigger trouble. Hurricane Irma in September added to their existing challenges.

According to the Florida Department of Agriculture’s chief apiary inspector David Westervelt, Hurricane Irma drastically compounded the state’s ongoing problem of honey bee colony loss. He says at least 75,000 of Florida’s 600,000 honeybee colonies were affected by the storm: Bees drowned, were blown off course, or died of starvation due to destruction of the nectar- and pollen-rich vegetation on which they forage.

Florida bees matter nationwide: Twenty to 25 percent of the nation’s honey bees pass through Florida, often wintering here to gain strength before or after pollinating California almonds. Beekeepers from New York, Wisconsin, Ohio and Michigan winter their bees in Florida to fortify the hives: In 2006, Florida had 1,000 registered beekeepers, now it’s 5,000. Let’s call them snowbees.

When people think of bees, they think of honey. But talk to commercial beekeepers like Doan and it’s clear that being hired-gun pollinators is the bees’ big money; honey is secondary. It takes 1.8 million hives to pollinate California’s almond crop alone, by bees that are trucked in from all over the country. Doan says it was about 1991 when he started making more money on pollination than on honey. He says his bees these days don’t have the vigor to produce honey in any quantity.

The honey bee crisis is often blamed on fungicides, herbicides and pesticides called neonicotinoids. Not so fast, say researchers like University of Florida apicultural scientist Jamie Ellis. Yes, these may be implicated, but the biggest challenges for beekeepers in Florida and around the country are viruses carried by tiny varroa mites, as well as weather, queen quality and bee nutrition.

Most years after pollinating California almonds, David Hackenberg brings his bees to Trilby, near Dade City, for the winter, to build his hives stronger. He says Florida gives him a head-start on the season. Then he heads to Georgia to begin pollinating peaches, then to Pennsylvania, then to Maine for blueberries, New York for clover honey and finally to pollinate pumpkins back in Pennsylvania. With one of the largest apiaries on the East Coast, he moves his hives 22 times a year and trucks 80,000 to 100,000 miles. Hackenberg, who coined the term colony collapse disorder in 2006, says bee longevity is a serious problem. His bees used to live two months; now it’s a little more than half that.

When Hackenberg started beekeeping more than 45 years ago, it was a leisurely life, he says. You did a little bee work and then you went fishing. A 5 or 6 percent annual loss was average, and you didn’t have to feed them. Now, he says he spends all his time feeding bees and making replacement bees to cover his losses. He has had to rent someone else’s bees to fulfill his pollination commitments.

“Essentially, we have an industry that is shielding the public from the loss of bees because the beekeepers are taking that burden upon themselves,” Ellis says. “Losing 30 percent of one’s stock yearly is a tremendous stress on a business. The situation is not sustainable.”

For the past four years, $20 million has been earmarked annually by the U.S. Department of Agriculture for the Emergency Livestock Assistance Program to compensate for losses of livestock, honey bees and farmed fish. In April, that number was bumped up to $38 million to deal with 2017’s stunning number of natural disasters (hurricanes as well as blizzards, drought and wildfires). For Hackenberg and others, this means the government is writing a check for their lost hives and revenue. But because farmers have had to pay more for a dwindling number of pollinators, Hackenberg predicts consumers will soon see increased prices in the grocery store for items like watermelon, cucumbers, cantaloupes, squashes and eggplants.

Dennis Van Engelsdorp is a professor at the University of Maryland and president of the Bee Informed Partnership, which studies honey bee health on a large scale. He says the varroa mite evolved on Asian honey bees — a native and largely benign pest of another species of bees — and was introduced to U.S. honey bees in Florida in 1987. They were first found around Ocoee, many people assuming they came in on Asian bees at Orlando International Airport. Because the mites are arthropods and honey bees are arthropods, it’s hard to develop a chemical compound that will kill the mites without killing the host. But Van Engelsdorp says some of the reason agrochemical companies haven’t leapt into action to solve the mite problem is economic.

“Compared to other agricultural crops, beekeeping is not a very lucrative one,” he says. “For the chemical companies to invest all that money in research, it would be hard for them to see a return on their investment.”

For Hackenberg and other beekeepers, the mites became an ongoing problem, but one they could live with. It was around 2006 when systemic pesticides came on the market, chemicals that are soluble in water so they can be absorbed via a plant’s vascular system and moved around its tissues. Researchers like Ellis are careful to say that these systemic pesticides are not responsible for killing honey bees — in fact, Ellis thinks things like bee management need to be examined as possible contributors for honey bee decimation.

“Honeybees are routinely moved around the country to provide pollination services, where they are eating a single crop for six weeks,” Ellis says. “You’re putting bees on monocultures at high density, these generalist foragers. It seems like a pretty easy way to spread around pathogens.”

Beekeepers like Hackenberg and Doan, who are cousins, say that these days the presence of varroa mites, which carry up to 13 different viruses, is a near death sentence for hives. They attribute this to weakened immune systems and poor nutrition.

Hackenberg and son Davey have developed their own protein supplements. Davey estimates that each hive gets 40 pounds of protein annually, with a steep increase in labor to feed the bees and administer mite treatments, a total he says comes to $110 per year per hive, money that used to be all profit.

And that’s where companies like Healthy Bees step in. Florida entrepreneur Lee Rosen and chief scientist Dr. Francesca del Vecchio have developed an all-natural bee food called BeesVita Plus. Van Engelsdorp and the Bee Informed Partnership are conducting a field trial of the product, an enormous study of hone bees in Argentina, Brazil, Italy, Turkey and in the United States by scientists and beekeepers in California, Pennsylvania and Florida, at apiaries like Doan’s and the Hackenbergs’.

Doan started feeding his bees this food in March and is hopeful. But it’s a big shift: When he started beekeeping 50 years ago, they were mostly self-sufficient. Where he used to spend 45 minutes a year on a single hive, that number is now up past 2 hours.

In Fort Meade, Argentinian field technician Martin Paul helps Doan spread the BeesVita Plus powder across the tops of the hive frames, one cup for every 10 frames. The bees are docile during the process, the air perfumed by oregano and lemon oil, both ingredients in the feed along with dextrose, kelp and brewer’s yeast.

As Doan readies his hives for the long trip back to New York, he’s unsure whether this new feed will help combat mites and other problems, or whether the vigor of the bees and honey yield will increase. One thing he’s sure of, though, is that the life of a Florida beekeeper is much harder than it used to be.

“Beekeepers are spending a lot of time and money making up their losses,” he says. “Imagine if those losses were cattle or hogs.”

End of January Bees are shipped to California where they pollinate almonds for four weeks.

End of February Bees head back to Florida.

Mid-April Bees are shipped back to western New York (just west of Rochester) to pollinate apricots, cherries and apples.

Until the end of June Bees are “rested” in a honey location.

Late August Beehives are all grouped back together and put on goldenrod to get some weight on the bees and make some honey.

End of September Hives are stripped of excess honey and bees are readied to go back to Florida.