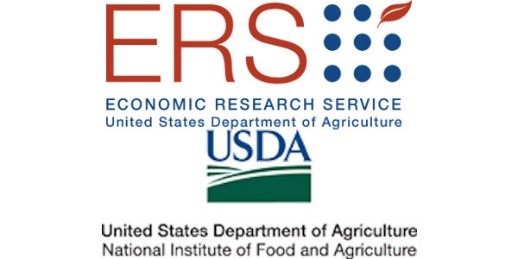 Until the early 20th century, honey bees (Apis Melifera) primarily provided beekeepers revenue through the sale of honey. In the 1910s, beekeepers began renting colonies to farmers to improve the yields of melons, orchard crops, and, later, following agronomic evidence, alfalfa and vegetable seed. As late as 1988, however, pollination services accounted for only 11 percent of beekeeper revenue. In 2016, that share had risen to 41 percent, slightly surpassing revenue from honey sales (with the remainder being sales of beeswax, package bees, queens, and Government payments).

The relatively recent increase in pollination service revenue is explained primarily by the dramatic growth in acreage for almonds. Almonds bloom early and produce unpalatable honey. Compared with other crops, almonds require more honey bee colonies per acre for pollination and suffer greater yield losses without insect pollination. Before the crop’s recent expansion, beekeepers used the almond bloom to boost early-year colony populations, which increased honey production later in the year. Beekeeper surveys in California and the Pacific Northwest indicate that until 2004, almond pollination fees were only slightly higher than fees for other crops. From 2004 to 2006, however, almond pollination service fees more than doubled and, after receding slightly, remained high through 2016. Recent data show almond farmers paid $165 per colony rented in 2016, roughly triple the average of $55 for other crops.

In 2016, almonds accounted for 82 percent of all U.S. expenditures on pollination services. High fees explain only part of this large share. Regardless of price, almonds account for 61 percent of all colony rentals and 52 percent of all acres on which colonies are placed. Almond acreage growth has coincided with greater planting density, which may also have raised the crop’s pollination needs. In 1990, U.S. farmers harvested 411,000 acres of almonds at 88 trees per acre. In 2016, they harvested 940,000 acres at 116 trees per acre.

Nearly all U.S. almond acreage is concentrated in California’s Central Valley region. As the crop’s demand for pollination services has outstripped local supply, farmers have paid high fees to bring in colonies from cross-country distances for the February bloom. At 5 percent, the pollination services share of all farm costs is far higher for almonds than for most other crops (about 1 percent). 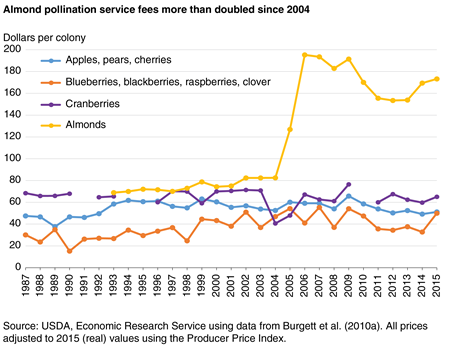