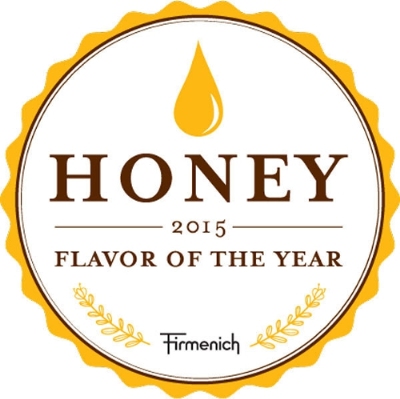 Visit www.honey.com for recipes, how-to videos, and more ways to celebrate honey being named ‘Flavor of the Year’ for 2015.

Consumers, restaurateurs, manufacturers and home cooks alike have come to an agreement in 2015 on one golden ingredient—honey. This beloved sweetener, which was named Flavor of the Year by Firmenich1, is being recognized for its unique flavor and its versatility as an ingredient, elevating its status beyond an everyday sweetener. In honor of National Honey Month, the National Honey Board (NHB) continues to bear the good news and raise awareness about honey and its many culinary uses.

Firmenich chose honey for this award because they believe it has the potential of becoming a “classic” flavor. Honey may be well on its way to joining the likes of vanilla, chocolate and strawberry in this prestigious category and consumers seem to agree. According to a recent Consumer Sweetener Usage & Attitudes Study Report2 fielded by the NHB, 6 out of 10 consumers agreed that foods sweetened with honey taste better than foods made with other sweeteners. In addition, 46 percent of total consumers say they have used honey in the past month3 adding to the continued growth and demand of honey on menus and in households.

“We are thrilled to be named Flavor of the Year for 2015. We have seen honey grow exponentially in its use with chefs, manufacturers and consumers over the last few years, especially with yogurt, craft beers and baked goods,” explained Catherine Barry, NHB director of marketing. “With consumers preferences leaning towards artisanal, natural and clean-label ingredients; we believe consumers are realizing the potential of honey as a premier ingredient in foods and beverages.”

Product developers and chefs have discovered how versatile honey is and have included it in combinations with many different flavor profiles. From craft beers and cocktails, functional beverages to baked goods and snack bars, among others, Firmenich took notice that honey is becoming a sought-after flavor option.

“Product developers are realizing what a fantastic and versatile flavor honey is in regards to combining it with other tonalities, making honey an easy choice for Flavor of the Year,” says Patrick Salord, senior flavorist at Firmenich.

“Crafted from the nectar of flowering plants, honey’s unique flavor profile is unlike any other,” shared the experts at Firmenich when making the announcement. With more than 300 varietals in the United States, ranging in flavor and appearance, this iconic sweetener pleases all taste preferences and is appealing to consumers of all ages. The flavors of honey can range from lighter colored honeys, which are milder in flavor, to darker honeys that tend to be more robust, making it easy to choose the right kind of honey for the recipe ahead.

“This versatile ingredient is used on my restaurant menus, including in our popular coffee drinks, but it is also a staple ingredient in the recipes developed for my cookbooks, and in my pantry at home. I have more than 100 different honey varietals I use when cooking for my family,” shared TV Personality and Cookbook Author Chef David Guas. “When I’m looking for an ingredient to add depth to my menus, I know that honey will balance and complement a variety of foods and marry flavors from sweet, sour, bitter, salty and even savory.”

Beyond taste, honey has a multitude of functional benefits for both cooking and baking. Honey attracts and holds moisture, enhancing freshness and shelf life, and it acts as a binder and thickener for sauces, dressings and marinades. Honey adds a rich golden or amber touch to finished recipes, can be used as a substitution for granulated sweeteners, or can serve as a simple syrup in cocktails or beverages.

Barry thinks honey winning the 2015 Flavor of the Year award is just the beginning for this artisanal ingredient. She added that we have known for years that honey’s versatility and multi-functional use expands beyond an everyday sweetener in your tea or on toast.  Barry is thrilled to watch the momentum build as consumers become more educated about their food choices.

About the National Honey Board (NHB): The NHB is an industry-funded agriculture promotion group that works to educate consumers about the benefits and uses for honey and honey products through research, marketing and promotional programs. Follow on Facebook, Twitter, Pinterest, Instagram, YouTube and visit www.honey.com and www.storyofhoney.com for recipes, how-to videos and more info. Chef David Guas is a spokesman for the NHB.

Jessica Merzdorf Purdue University entomologist Ian Kaplan and his team have received a $3.6 million grant from the U.S. Department of Agriculture’s National Institute…