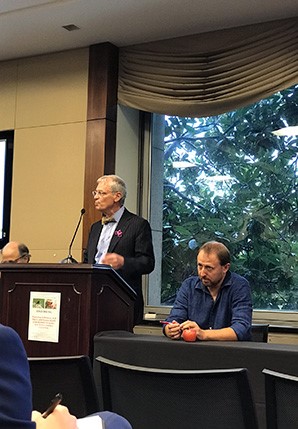 Rep. Earl Blumenauer said he’s looking for a lull in the congressional agenda before pressing legislation to limit the use of certain pesticides that may harm bees.

“Part of it is just wait for things to calm down a little bit,” the Oregon Democrat told E&E News, describing the outlook for his bill, H.R. 1337, the “Saving America’s Pollinators Act.”

Rep. Earl Blumenauer (D-Ore.) speaking today at an event on neonicotinoids. @foe_us/Twitter
EPA allows the use of eight neonicotinoids, including imidacloprid and clothianidin, on various crops. The chemicals were introduced in the 1990s and have become popular, including as seed treatments, because they’re absorbed throughout the plant and are less toxic to vertebrate animals than other pesticides.

But they tend to persist in soil — sometimes for years — and they’re prone to escape planted fields, critics said yesterday at a panel discussion on Capitol Hill.

Neonicotinoids’ potential role in bee declines is hotly debated. While most lab studies have found they can be harmful to honeybees, most field studies have found limited or no effects, according to the Cornell University College of Agriculture and Life Sciences.

They’re the most widely used pesticides in the world and the most studied insecticides for effects on bees, according to Cornell’s Pollinator Network.

Neonicotinoids are also used on national wildlife refuges; the Center for Food Safety and the Center for Biological Diversity have sued the Trump administration to stop the practice.

Blumenauer’s bill has 69 co-sponsors, all Democrats. He said at the panel discussion that the legislation ought to have bipartisan support and is a “half step” toward ending use of neonicotinoids — depending on the proposed EPA panel’s conclusions. House Rules Chairman Jim McGovern (D-Mass.) is the chief co-sponsor, giving the bill an influential ally.

The packed congressional schedule, including the impeachment inquiry, may need to ease before the pollinator bill can move.

“I think when people are ready to move, this would be a little thing that might fill that gap,” Blumenauer said.

Scientists have warned for years about the importance of protecting bees and other pollinators, which play a critical role in helping our food grow. But pollinator populations are declining worldwide, raising grave questions about what the future of food will look like without the insects we depend on to pollinate our crops. And unfortunately it’s not just about getting more insects out into the world.

While there’s strength in numbers, big populations alone may not yield the best outcomes, says a study published Wednesday in the journal Science Advances: Species diversity has its own important role to play in farm productivity.

And there are some simple things that can be done to encourage this diversity.

The team behind this research looked at dozens of studies from locations around the world to uncover trends in how, exactly, pollinators and other “service-providing organisms” fit into agricultural ecosystems.

“In many ways, nature is an outstanding service provider for agriculture,” Dainese says. “For example, wild bees pollinate fruit trees and other crops, while predatory ladybugs eat pests that would otherwise damage or even destroy crops.”

Species richness, Dainese’s team found, benefits those human-feeding ecosystems “in addition to and independent of” high population numbers. That could have major implications for shaping the future of agriculture across the world.

“We show that agricultural fields with a greater diversity of these ‘beneficial’ insects are better protected from harmful insects, promote pollination, and produce higher yields,” Dainese says.

Dramatically altering land for agriculture, called landscape simplification, can kill off pollinators’ food and resources, alter their species pool, and even change their interactions.

The researchers measured the damages of landscape simplification on pollinators and found that biodiversity loss may account for 50 percent of those negative effects.

Loss of species richness accounts for half of the negative outcomes associated with intense land clearing.

Real-world ecosystems tend to have a handful of highly abundant species that dominate, as well as many rare ones.

On farms, “richness and total and relative abundance are not mutually exclusive but concurrently contribute to support pollination and pest control services,” Dainese says.

The findings add to the conversation around land-use change and management. In a recent report, the Intergovernmental Panel on Climate Change warned that humans need to overhaul our land management practices, particularly related to agriculture and livestock, in order to avoid the worst outcomes of climate change.

The IPCC recommends protecting agricultural systems against biodiversity loss and land degradation, saying that “locally appropriate policies and governance systems” will be key to preventing these harms.

Dainese agrees: “Diversification could be as simple as adding wildflower strips, trees or hedgerows along the edges of fields, giving these beneficial species places to live,” he says.