A rare blue bee scientists thought might have become extinct has been rediscovered in Florida.
By: Alaa Elassar, CNN 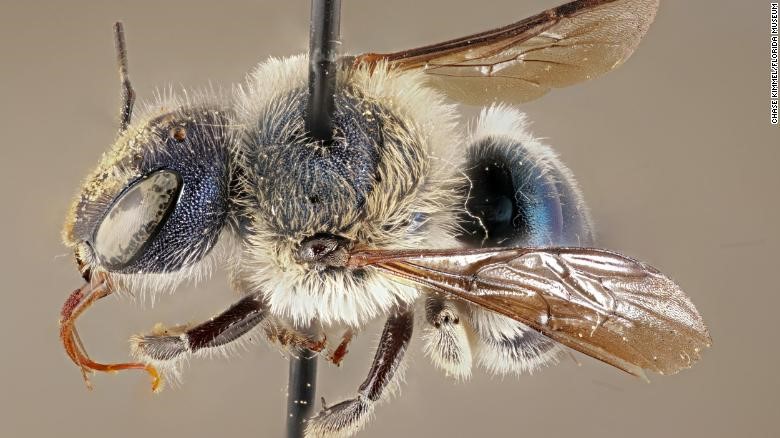 This blue calamintha bee specimen was collected in 2002 in Placid Lakes and is one of five specimens at the Florida State Collection of Arthropods in Gainesville.
(CNN)An extremely rare blue bee that was last seen four years ago has been rediscovered by a researcher at the Florida Museum of Natural History.

The metallic navy insect, a blue calamintha bee, had only been previously found in four areas “totaling just 16 square miles of pine scrub habitat at Central Florida’s Lake Wales Ridge,” the Florida Museum said in a news release.
The discovery marks an incredible breakthrough as scientists race to learn more about the blue bee, which is currently listed by Florida’s State Wildlife Action Plan as a species of greatest conservation need.

“I was open to the possibility that we may not find the bee at all so that first moment when we spotted it in the field was really exciting,” postdoctoral researcher Chase Kimmel, who found the bee, said in the release.

Dreaming of an indulgent porterhouse for two? Want to be surprised by a mixture of tasty meats, monthly? These delivery services will keep you well-fed as long as you like. 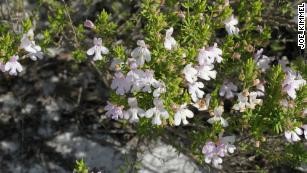 Kimmel spotted the bee, known for its unique way of collecting pollen, when he and a volunteer were installing a bee condo in the Lake Wales Ridge near some Ashe’s calamint — another threatened species that blue calaminthas depend on for food.

“We observed a shiny little blue bee grabbing the flower and rubbing its head on the top portion of the flower two or three times before moving on to another flower,” Kimmel told CNN.

“In reading about this unique behavior we were pretty shocked to see it.”

After catching the bee in March, the researcher used macrophotography and checked in with lead authors who studied the species to confirm the insect was a blue calamintha.

While finding a blue calamintha has reassured scientists that the bee is still present despite the impact humans have had on their environment, there is still little known about the species’ behavior, biology, and habitat needs.

Kimmel and his adviser, Jaret Daniels, are currently working on a two-year research project to determine the blue calamintha bee’s current population and the species’ nesting and feeding habits.

Before the discovery, the blue bees were only found in four locations along the southern portion of the Lake Wales Ridge. This spring, Kimmel was able to record the blue bee in seven new areas they were never spotted in before, proving their known range is larger than scientists thought.

“It is still very rare and can take many hours and days to find it which reinforces how rare it can be. Its presence is highly associated with Ashe’s calamint, so the bee may influence how well the plant is pollinated which can affect the plant’s survivorship,” Kimmel told CNN.

“It is very important to continue investigating the relationship between the bee and the plant host or hosts and its influence on the environment itself.”

Kimmel and Daniels also discovered another plant the bee visits when it cannot find Ashe’s calamint. However, the threatened plant species isn’t the only risk to the bee’s survival.

Blue calamintha bees are endemic to Florida, and have only been found in scrub habitat in the Lake Wales Ridge — one of the nation’s fastest-disappearing ecosystems.

“It’s one thing to read about habitat loss and development and another to be driving for 30-40 minutes through miles of orange groves just to get to a really small conservation site,” Kimmel said. “It puts into perspective how much habitat loss affects all the animals that live in this area.”

Part of the pair’s project, funded by a grant administered by the Florida Fish and Wildlife Conservation Commission, will help determine whether blue calaminthas qualify for protection under the Endangered Species Act.

A solitary native bee, the blue calamintha does not live in a large colony. Each female builds a nest, and does not care for its young. The project will also allow scientists to learn more about the bee’s nesting habits and preferences, none of which is currently known to scientists. 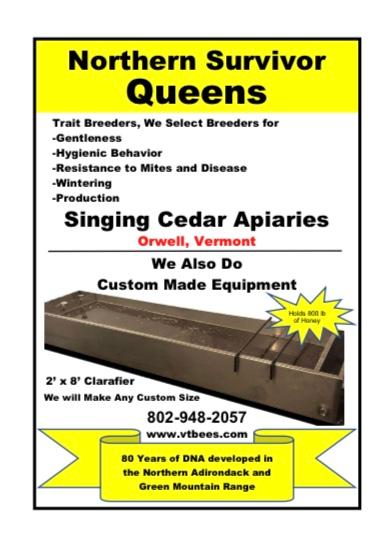