John Lindt For the Times-Delta 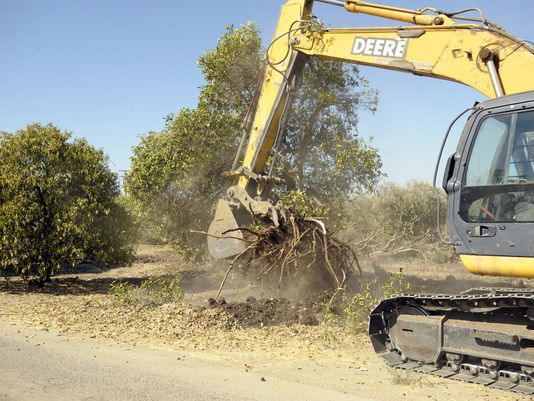 A Terra Bella citrus farmer’s valencia orchards are being uprooted, due to lack of water

Terra Bella Irrigation District in southern Tulare County, California is a great place to grow citrus, but only if there is water.

It is the home to about 400 citrus farmers who at least until two years ago — had about 10,000 acres of citrus trees.

“We figure we have lost 50 to 60 percent of those groves due to lack of water in the past two years” he said.” “It’s pretty depressing.”

No doubt the Terra Bella district south of Porterville has been hardest hit with at least 5,000 fewer acres due to the drought. In the Central Valley, Citrus Mutual president Joel Nelsen says they estimate over the past two year we have lost about 25,000 citrus acres, mostly Valencia and some early navels he says.

Nelsen says most other citrus growers have managed to keep their trees alive on groundwater.

Unlike other districts around here, Terra Bella has virtually no ground water but depends on surface water delivered since the 1950s from the Friant Kern Canal.

Geivet says the district in a normal year would deliver around 20,000 acre feet of irrigation water to farmers. But last year due the drought — they got only 11,000 acre feet with some creative trades and cash on the barrel head.

This year the district got only half that, about 5500 acre feet.

Again this was through a water exchange where “there was enough money to make the water move” he figures.

With water that some have had “farmers have kept their most productive trees alive on a life support basis.”

Local farm manager Ed Chambers says he sees another grove bite the dust on a regular basis including some groves over 100 years old. “I counted 106 rings on the trunk of one of them the other day.”

Chambers says farmers here who have some water are paying more for it than their crop is worth. Chambers also farms in the Porterville area and has seen lots of his neighbors’ wells go dry. “They are reaching water at 150 feet when five years ago it was 25 to 30 feet.”

“The Porterville area, if it gets 12 inches of rain this winter, will survive” says Chambers since they will get river water. “But not Terra Bella.”

“If the federal government does not supply water to Terra Bella it will all just go away,” he said.

Part of the reason why Terra Bella has little good ground water is its proximity to the Deer Creek oilfield as hydrocarbons have migrated into the aquifers here.

While a number of the trees that have met the bulldozer are the out of fashion Valencia variety, Chambers says it has affected all citrus types.