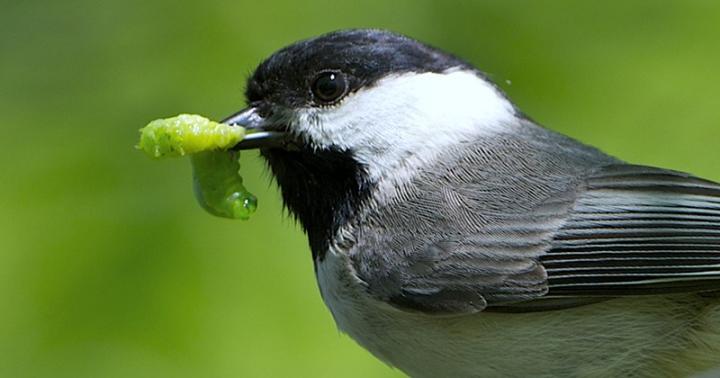 Image: Researchers Studied the Impact of Non-Native Plants on the Carolina Chickadee, an Ideal Representative for Bird Species in the Eastern and Southeastern US.

Human-dominated landscapes are one of the most rapidly expanding and least-understood ecosystems on Earth. Historically, in urban areas, landowners convert native plant communities into habitats dominated by non-native species. While less susceptible to pest damage and demanding less maintenance, non-native plants are extremely poor at supporting insects, including honey bees – many of which are critical food for higher order consumers like birds.

In the first study of its kind, University of Delaware researchers Doug Tallamy and Desirée Narango teamed up with Peter Marra, director of the of the Smithsonian Migratory Bird Center (SMBC) to investigate the link between non-native plants and birds’ population growth in these landscapes. The research was published in Proceedings of the National Academy of Sciences of the United States of America (PNAS).

“This is the first time that the breeding success of a bird has been directly tied to landscape decisions that homeowners make. Quite simply, humans are changing the vegetation of North America with these non-native species,” said Tallamy, professor in the UD Department of Entomology and Wildlife Ecology.

In the United States, 432 species — more than one-third of birds — are insectivorous and, thus, could be harmed by declines in food availability and at risk of local extinction in urban and suburban areas. Moreover, many of these plants serve as food for pollinators, where the invasives do not.

“Most homeowners think plants are just decorations with no thought to the ecological roles plants must play in our landscapes,” Tallamy said. “So they go to the nursery and buy the prettiest plant they can find. The nursery industry has pushed plants from someplace else for a century because they are unusual and have market value.”

In Washington, D.C., northern Virginia, and suburban Maryland, more than 200 homeowners, all citizen scientists within SMBC’s Neighborhood Nestwatch program, allowed the team to come into their personal yards and investigate plants, insects and birds. The researchers directed the effort, examining the impact of non-native plants on breeding birds like the Carolina chickadee, a songbird that lives in the eastern and southeastern U.S., and an ideal representative for insectivorous bird species.

Most plant-eating insects can only eat species with which they have coevolved. Non-native plants have defensive chemicals in their tissues, which ward off indigenous insects. The indigenous insects cannot eat a given plant unless it has developed the adaptations to circumvent those defenses. Not only do non-native plants smell and taste different, but these species are often toxic to most of native bugs.

“As an example, monarchs can only eat milkweeds because that is the plant lineage they adapted to over the eons,” Tallamy said. “But now monarchs can’t eat anything else. So when we bring non-native plants into the country, our insects do not have the adaptations required to eat those plants without dying.”

The study’s findings demonstrate that residential yards dominated by non-native plants have fewer arthropods, like plant-eating caterpillars and predatory spiders. That spells bad news for birds who depend on this food for their young. Homeowners’ decisions to use non-native plants forces the birds like chickadees to switch diets to less preferred, less suitable prey.

“The Carolina chickadee is almost entirely insectivorous during its breeding season. They predominantly consume caterpillars, spiders and other bugs,” said Narango. “Properties landscaped with non-native plants become population sinks for the chickadees that need insects to reproduce and survive.”

As the amount of non-native plants increased in a yard, the birds were less likely to occupy and breed; for ones who did breed, they produced fewer young than birds breeding in native-dominated yards.

“These observations of the chickadee are a loud, conservation alarm for other birds like the warblers, vireos and thrushes,” said Marra. “These are all examples of species that have disappeared from human-dominated habitats. If we make a concerted effort to re-plant with native species, this might be an opportunity to bring back the birds, right in our own backyards.”

The research was funded by National Science Foundation (NSF).

“The important lesson is that use of non-native plants in landscaping has a ‘trickle-up’ effect,” said Doug Levey, a biological sciences program director at NSF. “Those attractive, non-native plants just provide less food at the base of the food chain and thus support fewer birds than native plants.”

The UD and Smithsonian research found the key threshold is 70 percent. If the yard has more than 70 percent native plants biomass, chickadees have a chance to reproduce and sustain their local population. As soon as the number of native drops under 70 percent, that probability of sustaining the species plummets to zero.

“I see our results as a step-forward toward allowing our urban and suburban landscapes to be shared with biodiversity,” Narango said. “I hope that our results provide clear goals that homeowners and landscapers can strive for.”

So what are the right native plants? The next phase of research is now focused on a deep dive into the answer on that question.

In the D.C. area where the study took place, the best plants for homeowners in terms of supporting birds are, in general, oaks, native cherries, native willows, native elms, native birches, hickories and black walnuts.

“In 84 percent of the counties in the U.S., native oaks are the most important tree followed by native cherries and native willows,” Tallamy said. “When you chop these down, you are changing that area’s ecosystem.”

The researchers pointed to Gingko, Zelkova and Pieris japonica as prime examples of “do not plant” non-natives.