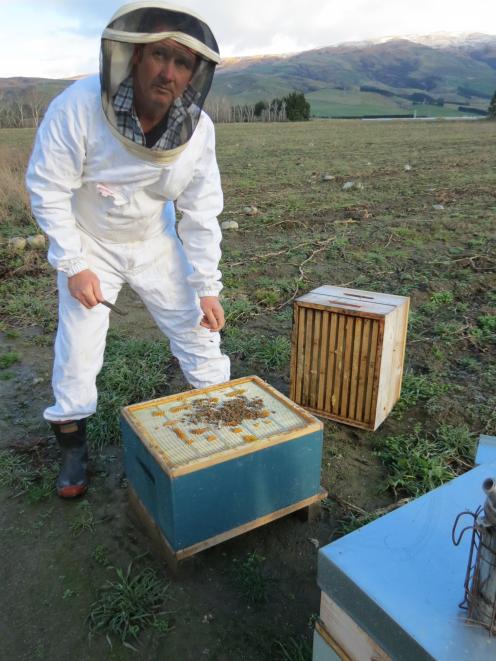 Apiculture New Zealand board member and commercial apiarist Russell Marsh, of Ettrick, said the honey commodity levy was most important step the bee industry had taken in decades.

Apiculture New Zealand (APINZ) has ”tweaked” its proposal to introduce a commodity levy on honey, following consultation with the industry during the past three months.

The move to introduce the levy was the most important step the industry had taken in decades, Apiculture New Zealand board member and Ettrick commercial apiarist Russell Marsh said.

”We are the only agriculture/horticulture industry without any consolidated investment.

”We need to get in line with other industries and what they are doing.

”They are just profit-takers and the industry needs to be more mature than that.

”That model is not sustainable.”

”We got some pretty good feedback and we have taken it on board and have slightly revised the proposal,” Ms. Kos said.

”People wanted more time to consider the proposal and they can still send feedback [on the amended version] until the end of December.

While APINZ would retain the 10c/kg commodity levy for harvested honey, the proposal would also now include comb honey.

In addition, those producing less than 750kg of honey per annum would be excluded from paying the levy.

”Those with 26 or more hives are considered commercial beekeepers, and will pay it,” she said.

Ms. Kos said there had also been some discussion about whether manuka honey should attract a higher levy.

”There was no practicality for a two-tiered levy system.”

The ”tweaked” proposal and voting papers will be sent out before February 1 and members will have a month to vote.

They expect the result will be known by about March 11 and if the outcome supports the proposal, an application for the commodity level will go to the Ministry of Primary Industries.

If that is approved, then a levy order can be expected to be in place by October 1, 2019.

Honey extractors will send data to APINZ by June of each year, an invoice will be generated and the levy must be paid by October 31.

The levy order will also allow the levy rate to be increased to a maximum of 15c/kg during the six years of the levy but only if there is a majority vote of levy payers.

Ms. Kos said they still anticipated raising about $2million from the levy annually, with about 40% going to research, about 20% to biosecurity, 10% towards running the organization and the balance would be spent on bee health, advocacy, education, industry support, attracting new people, and leveraging funding from sources such as the Sustainable Farming Fund.