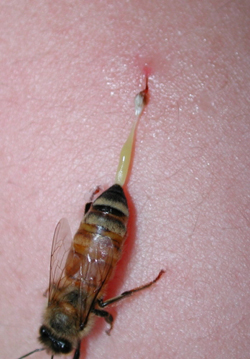 CHAMPAIGN, Ill. — Even as larvae, honey bees are tuned in to the social culture of the hive, becoming more or less aggressive depending on who raises them, researchers report in the journal Scientific Reports.

“We are interested in the general issue of how social information gets under the skin, and we decided to take a chance and ask about very young bees that are weeks away from adulthood,” said University of Illinois entomology professor and Carl R. Woese Institute for Genomic Biology director Gene Robinson, who led the research with postdoctoral researcher Clare Rittschof and Pennsylvania State University professor Christina Grozinger.

“In a previous study, we cross-fostered adult bees from gentle colonies into more aggressive colonies and vice versa, and then we measured their brain gene expression,” Robinson said. “We found that the bees had a complex pattern of gene expression, partly influenced by their own personal genetic identity and partly influenced by the environment of the colony they were living in. This led us to wonder when they become so sensitive to their social environment.”

In the new study, the researchers again cross-fostered bees, but this time as larvae in order to manipulate the bees’ early life experiences. The larvae were from a variety of queens, with sister larvae divided between high- and low-aggression colonies.

The larvae were removed from their foster hives and put into a neutral laboratory environment one day before they emerged as adults. The researchers tested their aggressiveness by exposing them to an intruder bee. (Watch a video of honey bees responding to an intruder.)

They were surprised to see that the bees retained the social information they had acquired as larvae. Those raised in aggressive colonies were 10 to 15 percent more aggressive than those raised in the gentler colonies.

“Even sisters born of the same queen but reared in different colonies differed in aggression, demonstrating the potency of this environmental effect,” Robinson said.

The finding was surprising in part because bee larvae undergo metamorphosis, which radically changes the structure of their bodies and brains.

“It’s hard to imagine what elements of the brain are influenced during the larval period that then survive the massive reorganization of the brain to bias behavior in this way,” Robinson said.

“We challenged them with pesticides and found that the aggressive bees were more resistant to pesticide,” Grozinger said. “That’s surprising considering what we know from vertebrates, where stress in early life leads to a diminishment of resilience. With the bees, we saw an increase in resilience.”

This finding also suggests that the effects of the social environment on young bees could extend beyond brain function and behavior, Robinson said.

The researchers don’t yet know how the social information is being transmitted to the larvae. They tested whether the bees differed in size, which would suggest that they had been fed differently, but found no size differences between aggressive and gentle bees.

“Adult honey bees are well known for their sociality, their communication skills and their ability to adjust their behavior in response to the needs of the hive,” Rittschof said.

“In mammals, including humans, the effects of early life social interactions often persist throughout adulthood despite additional social experiences,” she said. “A similar pattern in honey bees has broad implications for our understanding of social behavior within the hive and in comparison with other species.”

Source: University of Illinois at Urbana-Champaign