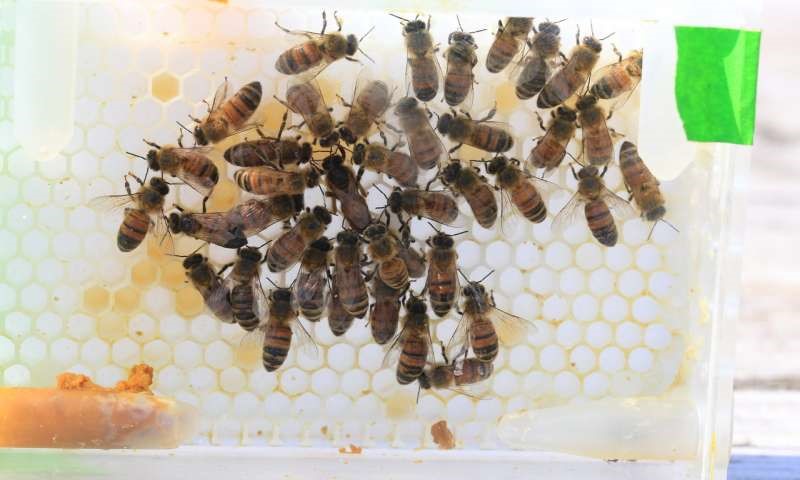 More than a decade after the identification of colony collapse disorder, a phenomenon marked by widespread loss of honey bee colonies, scientists are still working to untangle the ecologically complex problem of how to mitigate ongoing losses of honey bees and other pollinating species. One much-needed aid in this effort is more efficient ways to track specific impacts on bee health. To address this need, a group of Illinois researchers has established a laboratory-based method for tracking the fertility of honey bee queens.

Co-first authors Julia Fine and Hagai Shpigler, both postdoctoral researchers at the University of Illinois, worked with others in the laboratory of Carl R. Woese Institute for Genomic Biology Director and Swanlund Professor of Entomology Gene Robinson to establish a laboratory set-up that would mimic the key aspects of the hive environment and allow detection of egg-laying by honey bee queens living with small groups of worker bees. The resulting system, described in PLOS ONE, allowed them to explore the relationship between worker nutrition and queen fertility.

“The idea that honey bee nutrition influences colony level metrics of reproduction has been demonstrated before, but here, we examined an old story using new tools,” Fine said. “We were able to get a clearer picture of how nutrition can affect the relationship between honey bee workers and queens and how this can impact the queen’s egg production.”

Populations of many pollinator species have been declining in the US and worldwide. Studies of factors influencing wild and managed honey bee hives have identified four main factors influencing health: parasites, pathogens, pesticides, and poor nutrition. These factors can influence one another. For example, parasites may spread pathogens, much as fleas do on people, while poor nutrition might increase the likelihood of foraging on contaminated food sources.
Egg production is a vital aspect of honey bee colony function. Queens lay eggs that hatch into the thousands of worker bees that keep the colony running, as well as males and young queens to allow the colony to propagate. But in the dark, bustling interior of a standard hive, it is challenging to monitor egg laying or to evaluate the impacts of environmental factors.

“Egg laying occurs in the darkness of a hive occupied by thousands of workers and is therefore hard to track,” Shpigler said. “Queen egg laying was never studied outside of the colony; the biggest challenge was to give the queens the right conditions for continuous egg laying outside of natural conditions.”

To move queen productivity successfully into the lab, the researchers focused on the essentials of their natural environment. They developed a 3-D-printed plastic honey comb that they refined to mimic what a queen would experience in the hive, which ensured that the cage environment could be carefully controlled and kept pesticide free. They also provided each queen with a small group of worker bees to feed and support the queen; this element became the inspiration for their first experiments with the new system.

“Honey bee queens only ingest food in the form of glandular secretions provided to them by their worker caretakers, and queens are not known to lay eggs without the support of their worker bees,” Fine said. “The more we worked in this system, the more it became apparent that the easiest way to influence the queen was to first influence the worker bees that care for her. Once we identified this strategy, designing effective experiments became easier.”
Fine, Shpigler, and their coauthors provided each group of caged bees with honey, water, and sucrose solution, but varied the source of fat and protein: some bees were fed with a paste of honey and either a low or a high amount of floral pollen, while others were fed with bee bread, a mixture of pollen, honey, and secretions produced by worker honey bees that preserve and ferment the pollen. The researchers monitored how queen egg laying behavior was influenced by the type of diet fed to the workers caring for her.

They found that when a group of workers was fed pollen paste, the queen they attended was likely to increase her egg laying more slowly in the laboratory environment than a queen attended by bee bread-fed workers. This difference was most noticeable when the lower-percentage pollen paste was used, but persisted even in bees fed the richer pollen paste.

The results affirmed the importance of nutrition to queen productivity, as well as demonstrating the potential utility of the laboratory set-up for investigating other factors affecting queen behavior and health.

“The effect of the nutrition . . . was our first successful use of the system, giving us hope for more success in the future,” Shpigler said. “The results show very nicely how the honey bee colony functions as one body, with shared digestive and reproductive systems. The workers are the ones that eat the food and the effect is on the queen egg laying—the superorganism in action!”

“It’s been exciting to see the kind of quantitative data that we can generate with this system using fewer resources relative to studies that use full size honey bee colonies,” Fine said. “Eventually, we hope that this system can be adapted as a risk assessment tool to identify other factors that positively and negatively influence honey bee reproduction . . . there is an immediate need for a laboratory system that can be used to quantitatively assess risks to honey bee queen health and reproduction.”