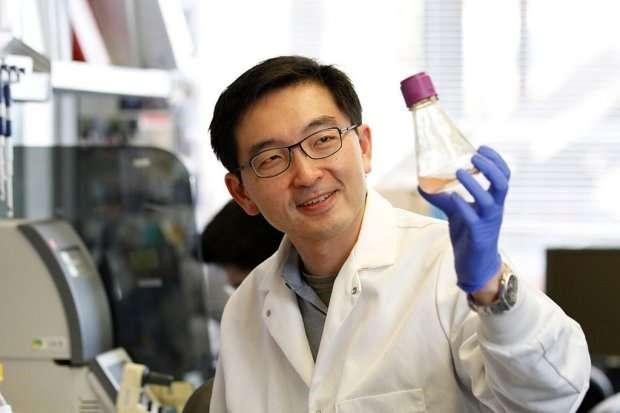 Kevin Wang holds a flask of cells that have been engineered to produce the Regina protein, a mammalian protein similar in structure to the active component of honeybee royal jelly.
Credit: Paul Sakuma

A protein used by honey bees could hold the key to a fountain of youth for embryonic stem cells.

Researchers from the Stanford University School of Medicine found a mammalian protein—NHLRC3— that helps prevent embryonic stem cell aging in mice by causing the cells to remain pluripotent.

The protein, which the researchers dubbed Regina, is similar in structure to royalactin, the royal jelly that serves as the queen-maker for the honey bee and has cross-species effects on longevity, fertility, and regeneration.

In the bee hierarchical structure, worker bees select a few potential queens from female larvae and nurture them with the royal jelly during their development.

“In folklore, royal jelly is kind of like a super-medicine, particularly in Asia and Europe, but the DNA sequence of royalactin, the active component in the jelly, is unique to honey bees,” assistant professor of dermatology Kevin Wang, MD, PhD, said in a statement. “Now, we’ve identified a structurally similar mammalian protein that can maintain stem cell pluripotency.”

The study was published in Nature Communications.