California has a highly variable climate, and severe droughts occur there with considerable frequency. The current 4-year drought is, by almost any measure, the most severe since detailed recordkeeping began in the late 1800s. Given such severe shortages in surface-water availability, agricultural production in California is currently heavily focused on the shortrun challenge of finding the right mix of planted acreage reductions, deficit irrigation, and increases in groundwater withdrawals on the State’s 7 to 8 million irrigated acres.

While the shortrun water shortages of this drought are surprising, sort of like a bad role of the dice, California farmers also face water scarcity as a longrun challenge. The latter challenge, which generally receives less attention than the current drought, stems from a combination of rising competition from other water uses, reduction in groundwater supplies, and climate change. Putting the response to the current drought in perspective requires information on how the longer run challenge continues to reshape irrigated agriculture in California. In this article, we examine long-run change in California’s irrigated agriculture by using data from the USDA Farm and Ranch Irrigation Survey as well as USDA, National Agricultural Statistics Service (NASS) crop acreage and yield reports.

One response by California farmers has been to increase investment in more-efficient irrigation systems, such as low pressure sprinkler and micro-irrigation systems that reduce water lost to evaporation, runoff, and deep percolation, thereby increasing the share of applied water that is beneficially used by the crop. Over the past 30 years, the share of irrigation water applied using the (typically) less-efficient gravity systems has declined while that applied by micro-systems has increased. 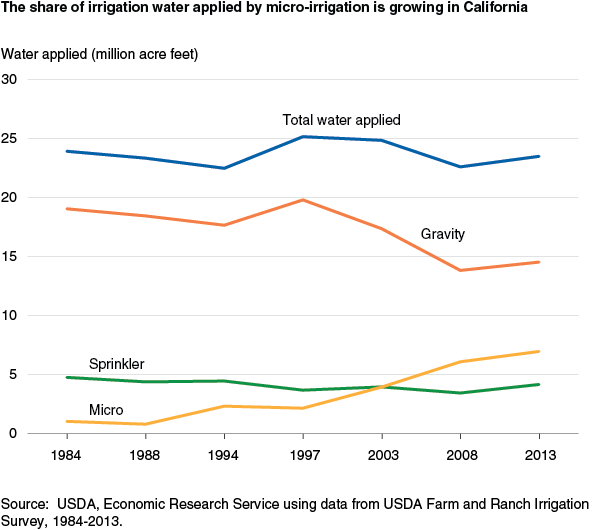 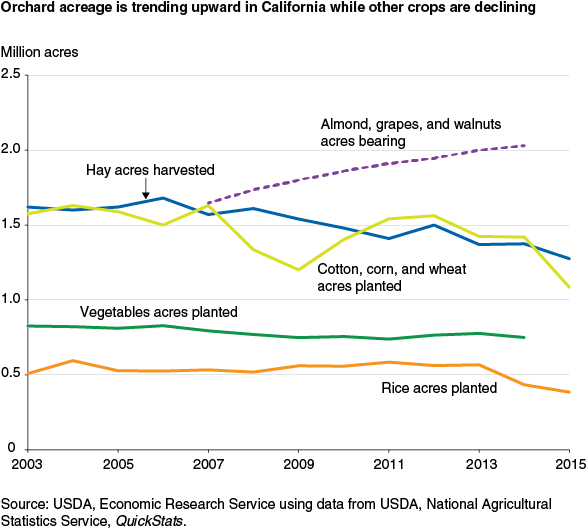 Of course, scarce water is only one factor driving these acreage shifts. The net effect of a complex mix of economic, policy, and environmental factors, including commodity price changes, has been a regional shift in irrigated production. While total acres irrigated have decreased in California, other regions—most notably the Mississippi Delta and the Northern Plains—have seen significant expansion in irrigated acreage over the past two decades. Extended periods of severe drought in California raise questions about whether greater shifts in irrigated acreage in response to regional water-supply differences are likely, possibly to more humid areas such as the Southeastern United States. However, the relative comparative advantages of regional production remains an important consideration. For example, not all of the increases in other regions’ irrigation acreage reflect a relocation of crops from California. Much of these increases have been in soybeans and corn for grain; soybeans are not a major crop in California, and most of the corn in California is grown for silage (fermented, high-moisture stored animal feed) for dairy cattle. While California agriculture faces increasingly extreme periods of water scarcity and greater competition for water, it continues to benefit from an abundance of high-quality soils and favorable weather conditions. This is evidenced in a comparison of irrigated yields for crops grown both in California and in the Southeastern United States. In most cases, the irrigated yields in California are 30 to 100 percent higher. In addition to differences in productivity, groundwater management and overdraft are concerns in both California and the Southeast. 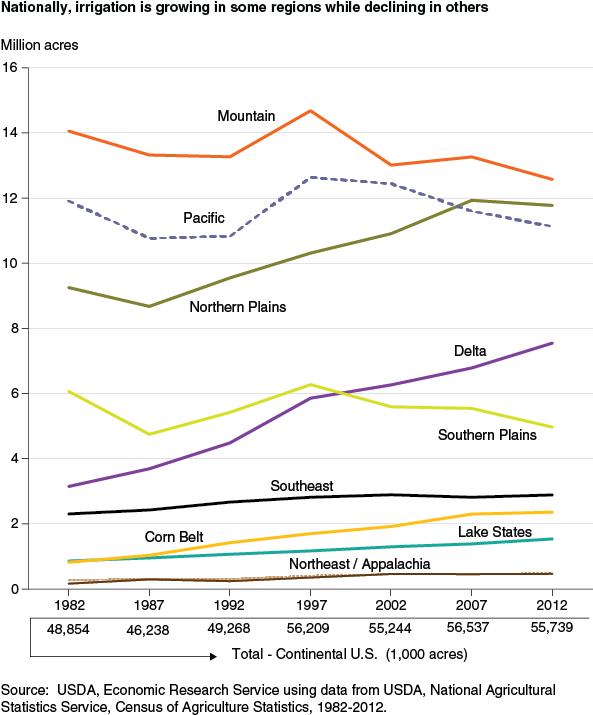 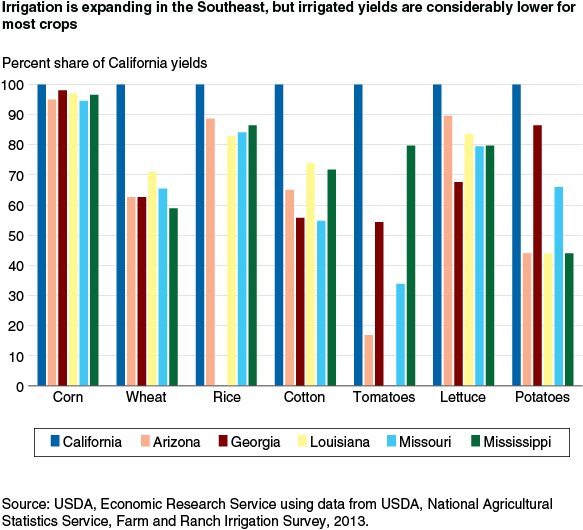 This article is drawn from…

by Petra Ahnert Ahhhh… Fall. This is the time of year that we finally get around to transforming our cappings into beautiful yellow blocks…