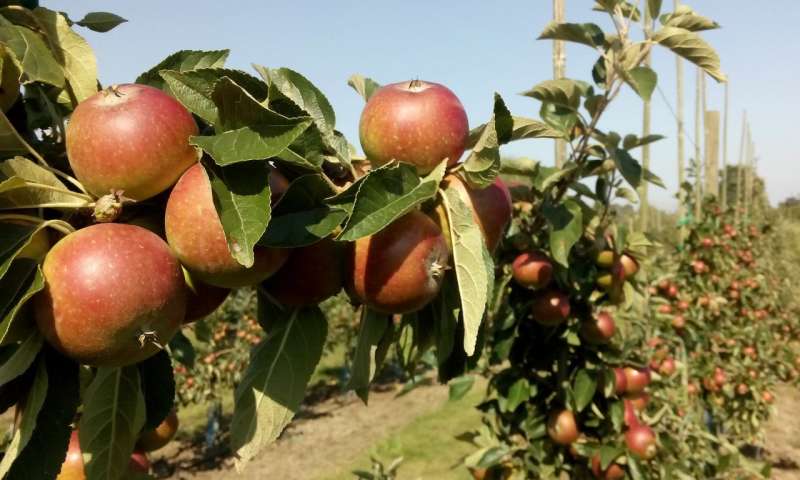 Apple growers should increase the amount of flowers around their apple orchards if they want to increase their harvest. A new study by researchers from Stockholm University, among others, shows that more pollinators, such as bees and flower flies, are attracted to orchards with flowers – which increase the chance for pollination.

This summer’s apple harvest set record highs and there were large expansions of organically produced apples. New research studying apple orchards in Sweden, Germany and Spain, published in the Journal of Applied Ecology, found that wild pollinators and pollination were higher in orchards with more flowering plants.

“However, many orchards do not contain high numbers of flowering plants. Growers could benefit from changing this,” says Peter Hambäck, professor at the Department of Ecology, Environment and Plant Sciences at Stockholm University.
Improved pollination generates more seeds, which may increase possible storage time for certain crops. Researchers believe that by generating more seeds in individual apples, thus changing the mineral content, apples can be stored longer. Increasing the amount of time apples can be stored after harvest has great advantages for apple growers, but more studies are needed to further investigate this link between pollination and seed production.
Higher apple harvest – not a threat to biodiversity
The study showed that the average production of apples in organic orchards is lower than in orchards utilising chemical pesticides for plant protection.

“Yet, a surprising result in the study was that the organic orchard with the highest production had considerably higher production than the average of the orchards using chemical pesticides. This shows us that there is a potential to develop more environmentally friendly cultivations and at the same time obtain a high harvest,” says Peter Hambäck.
For other crops, such as different grains, higher production usually leads to less biodiversity. This is because higher production is often achieved by cultivating larger fields packed more closely together, coupled with an intensive use of chemical pesticides. However, this is not the case for apple orchards according to the study:

“Organic orchards have as expected, a higher biodiversity, which means that they have more pollinators and predatory insects. A higher apple production however, does not impede a high biodiversity. Growers wishing to increase their apple production should allow wild flowers to grow in their orchards,” says Peter Hambäck. 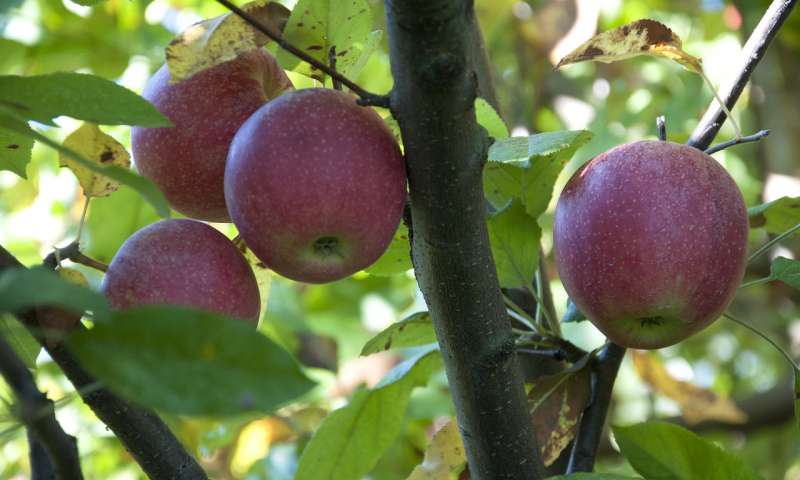 Apple growers want to get the most out of their high-value cultivars, and a Purdue University study shows they might want to focus on the types of apples they plant near those cash crops.
Since apple trees cannot self-pollinate, the pollen from other apple varieties is necessary for fruit to grow. Orchard owners often plant crab apple trees amongst high-value apples such as Honeycrisp, Gala and Fuji. Crab apples produce a lot of flowers and thus a lot of pollen for bees to spread around to the other trees.

“If you are growing some Honeycrisp, you want to plant something next to your Honeycrisp that bees will pick up and spread to your Honeycrisp and make good apples,” said Peter Hirst, a Purdue professor of horticulture and landscape architecture. “Growers will alternate plantings of different cultivars every few rows to promote cross-pollination, and they’ll sometimes put a crab apple tree in the middle of a row as well.”

Hirst and Khalil Jahed, a Purdue doctoral student, wondered if it mattered which type of apple pollinated high-value cultivars. To find out, they manually applied pollen from Red Delicious and Golden Delicious, and two types of crab apple, Ralph Shay and Malus floribunda, to Honeycrisp, Fuji and Gala. They put a net over the trees to keep the bees out, so they could control the pollen that was applied.

In Honeycrisp, pollen tubes created by Red Delicious pollen reached on average 85 percent of the distance to the ovary, compared to 40 percent for pollen tubes from crab apple pollen. And fruit set with Red Delicious pollen was four times higher in the first year of the study, and eight times higher in the second, compared to crab apples.
“On Honeycrisp especially, the two crab apples we tried are not very effective at all. The pollen grows very slowly, and you end up with reduced fruit set as a consequence,” Hirst said.

The crab apples did better with Fuji and Gala but still didn’t match the effectiveness of Red Delicious pollen.

When pollen lands on the pistil of the flower, it must be recognized, and if it is compatible, the pollen will germinate and grow down the style to the ovary. Once fertilized, the ovule becomes a seed and the flower becomes a fruit.

Jahed collected flowers from pollinated trees each day for four days after pollination and measured pollen tube growth and fruit set. Overall, the Red Delicious was the best pollinizer, followed by Golden Delicious and then the crab apple varieties. Jahed said the experiment should lead apple growers to consider the design of their orchards to ensure that better pollinizers are planted near high-value crops.

“If they have a good pollinizer and a compatible pollinizer, the fruit quality and fruit set will be higher than with those that are not compatible,” Jahed said.
The research was part of Jahed’s master’s degree thesis, which he has completed. He and Hirst do not plan to continue studying the effectiveness of different pollinizers, but he hopes that others take up the research. They do plan to publish one final paper on pollination and fruit quality next year.