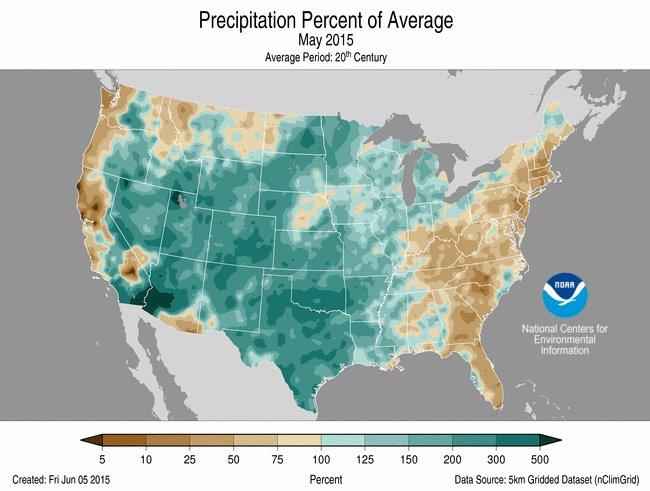 Wetter than average conditions were widespread across the central United States. Fifteen states from the Great Basin to Mississippi River had precipitation totals that were much above average. Colorado, Oklahoma, and Texas were each record wet for the month. In fact, Oklahoma and Texas each had their wettest month of any month on record with precipitation totals more than twice the long-term average.

The heavy precipitation during May essentially ended the multi-year drought that has plagued the Southern Plains since 2011. At the beginning of June, only 0.6 percent of Texas and 0.0 percent Oklahoma were in drought. This was the first time since 2010 that the drought footprint in both states has been this low. Although long-term (60+ months) precipitation deficits persist in some locations, some reservoirs have returned to above-average levels after being record and near-record low for the past several years.

The heavy rains in the central U.S. were accompanied by severe weather with over 400 preliminary tornado reports, the most since April 2011. The flooding rains and severe weather resulted in dozens of fatalities and widespread property damage.

Much of the East Coast was drier than average, despite the record high contiguous U.S. precipitation value and despite tropical storm Ana making landfall in the Carolinas early in the month. Seven states from the Southeast to New England had May precipitation totals that were much below average. No state was record dry.