However you pour it, honey is the bee’s knees

When you think of honey, you think sweetness and warmth, of Winnie the Pooh and living in the land of milk and honey. Honey is all that and more, a natural product that evokes a sense of comfort. It’s true what they say that a spoonful of honey helps the medicine go down, but nothing beats a few drops in a cup of hot tea, smeared on a piece of freshly baked bread, blended with garlic for the best wing recipe, or drizzled over a warm sniffer of brandy.

Even the various colours of honey – from light and delicate to deep and amber – gives one a sense of peace and optimism.

However you pour it, honey is the bee’s knees

Canada is home to some of the finest honey in the world. Research shows the nation is the world’s sixth largest producer of honey, and, according to the Canadian Honey Council (honeycouncil.ca) there are approximately 7,000 beekeepers in Canada, operating a total of 600,000 colonies of honeybees.

The prairie provinces of Alberta, Saskatchewan and Manitoba are the major honey producers, and this delicious elixir is produced from July to August. 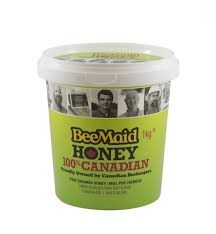 BeeMaid Honey (beemaid.com) reports Canadian honey is enjoyed in more than 25 countries worldwide due to its high quality. Plus bees play a vital role in the pollination of many crops including fruits and vegetables. “Well pollinated crops produce more fruit, and honey bees increase production by two to eight times,” notes the Canadian Honey Council.

It’s been estimated that honeybee pollination contributes up to $1 billion annually in terms of increased Canadian agricultural production, adds BeeMaid Honey – “this is in addition to the over $225 million in direct receipts from the production of honey itself.”

That’s a lot of money, honey!

BeeMaid Honey also reports honey is the gift that keeps on giving: Honey by-products include everything from beeswax for candles to household products such as polishes. Plus the protein-rich pollen is used in diet supplements and in cosmetics, like lip balms and skin creams.

Honey is sold by grade and colour and, according to the Ontario Beekeepers Association, (ontariobee.com) it can also be sold by nectar source, such as sunflower, clover, blueberry, buckwheat and more.

It’s a given the tiny honeybee is critical to the world’s food supply – and it has been in the headlines of late due to the alarming numbers of honeybees disappearing from the landscape. Scientists from around the world have banded together to research what is happening, as well as to keep the messaging going as to why bees are so important to the well-being of the globe – it’s truly the pillar of the environment.

Even the colour of honey, in all its various shades and hues, is a true celebration of natural beauty. Just recently the iconic KitchenAid line of appliances (kitchenaid.ca) announced that honey is the new hue for its Artisan series stand mixer and variable speed blender.

Inspiration came from a global need for bonding, say company officials. “Honey marries the sweetness of togetherness with a golden-orange shade that radiates warmth and positivity,” notes Julie Cluff for KitchenAid Canada in a recent media release. “And humans have been craving this sense of togetherness more than ever before.”

The company has been releasing a veritable rainbow of colours for its appliances since 1955, (the first mixer went on the market in 1919!) and, this year, it’s honey’s turn.

“Over the years we have created a variety of colours – close to 100 – and have always strived for these to be indicative of design and colour trends (we) see on the horizon,” says Cluff. “However, now as we look at our colour strategy, we aim to be more thoughtful in the emotional meaning behind them… to create meaningful connections to consumers tied to cultural happenings around the world.”

It’s obvious that honey, with its warm embrace and sense of comfort – hits the spot. What could be sweeter?

Honey is nutritious and delicious, but still high in calories, and should be used in moderation. It can be switched up with sugar. According to Healthline.com, nutritionally, 1 tablespoon (15 mL) of honey contains 64 calories and 17 grams of sugar, including fructose, glucose, maltose and sucrose. “Where honey shines is in its content of bioactive plant compounds and antioxidants – high-quality honey is rich in antioxidants. Darker types tend to be even higher in these compounds,” notes the site. Plus the antioxidants in honey can help lower blood pressure. It can also lower triglycerides.