‘The extent of it was quite surprising. Shocking,’ says research Susan Chan 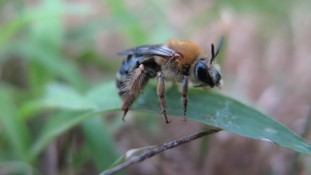 A new study shows the behaviour and reproduction of ground-nesting bees, like those that pollinate squash and pumpkins, is severely impacted when farmers treat the soil with neonicotinoid insecticide at the time of planting.

While other studies have looked at the impacts neonicotinoid insecticide, or neonics, have had on honey bees and bumblebees, this study from University of Guelph researchers is the first to look at ground-nesting bees.

It’s crucial to understand how these particular bees are impacted, because they’re often the ones pollinating those very crops, says Guelph professor and researcher Nigel Raine.

“We know that they nest in farm fields so the likelihood is that they might be exposed to pesticides if they’re applied to those crops,” said Raine, who also holds the Rebanks Family Chair in Pollinator Conservation.

The research was led by student Susan Chan over a three-year period. The researchers grew squash plants and applied three treatments: a neonicotinoid insecticide called imidacloprid applied to the soil, a neonicotinoid called thiamethoxam that coated the seeds of the plants and a chlorantraniliprole spray applied when the plant had five leaves, but before they flowered. There was also a control group.

“We didn’t know which treatments were assigned to which hoop house but boy, oh boy, you could quickly tell something was going on in three of those hoop houses,” Chan said. “The extent of it was quite surprising. Shocking, as a matter of fact.”

Raine said the most significant impact was in bees where the neonics were applied as a soil treatment.

“We found that those bees initiated 85 per cent fewer nests, so they dug fewer nests, they collected much less pollen, they left more than five times as much pollen … unharvested on the male flowers in our hoop houses and over the three years of the experiment, we found they produced 89 per cent fewer offspring than the untreated controls,” he said. 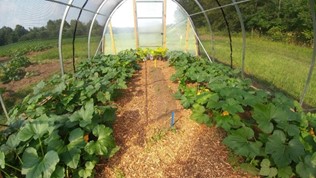 The researchers set up hoop houses to grow squash plants, applied pesticides, then introduced the bees into the hoop houses just as the plants were beginning to flower. The testing was blind, so researchers didn’t know which treatments were in which hoop houses, but researcher Susan Chan says it became clear pretty quickly that bees were negatively impacted by one particular treatment. (Nigel Raine/University of Guelph)

To read the whole article go to: