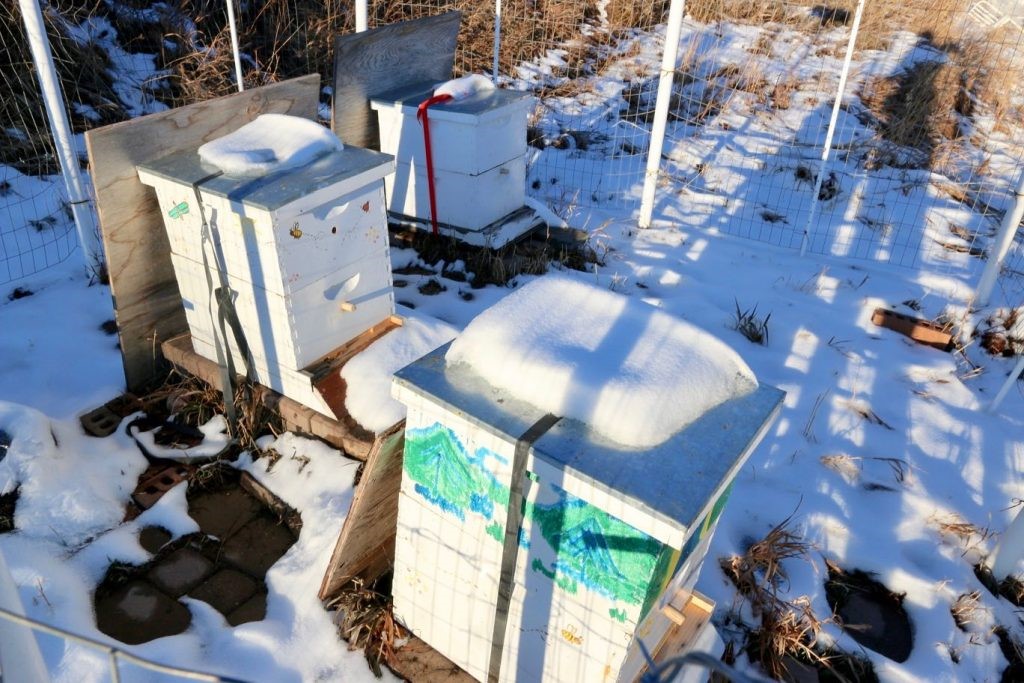 What happens to honey bees during the winter?
Insulated by snow, Routt County bees weather negative temperatures through the Yampa Valley winter
A blanket of snow covers a cluster of beehives at Colorado Mountain College Steamboat Springs.
Derek Maiolo

STEAMBOAT SPRINGS — Routt County’s honeybees keep buzzing through the winter.
Honey bees don’t hibernate. Most of them don’t die off, either. Bees, essentially, hunker down and work to keep warm in the winter, which means, with a lot of honey to slurp on through the snowy months, a beehive can make it through the cold temperatures of a Routt County winter.

In Routt County, most producers are small time operations with a few hives kept as a hobby or a small commercial operation, according to Routt County Beekeeping Association President Becky Edmiston. Edmiston, a biology professor at Colorado Mountain College Steamboat Springs, also is co-advisor to the college’s beekeeping club. For these beekeepers, it makes sense to simply batten down the hatches on their hives and weather the winter.

Getting a beehive through the winter is the greatest hardship in Routt County beekeeping, said Bill Fetcher, who keeps seven hives between the Fetcher Ranch in North Routt and his home a few miles north of Steamboat Springs.

“If I were a queen bee with a colony, I would not choose to settle here,” Fetcher said. “I’d want a warmer climate, like Grand Junction or Glenwood Springs, farther south where the weather extremes aren’t so harsh.”

Bees and snow do most of the work to keep a hive warm through winter. A beekeeper might make minor adjustments to the hive to improve insulation or ventilation in the winter months, such as wrapping a hive in black plastic to help it better absorb the sun’s heat or altering the opening of a hive. A blanket of snow on a hive helps insulate it and keep it warm, too. Besides that, though, it’s up to the bees.

“They kind of quiver and shake their wings, and that physical action generates heat. That’s how they stay warm,” said Perry Baker, co-owner of Outlaw Apiaries. “They’re constantly moving from outside to inside, outside to inside. On super cold nights when it’s 20 below and colder, the outer bees will actually freeze and die, and then they kind of fall to the hive floor, and you hope that there’s enough bees that can sustain that for many nights up here.”

Bees die everyday in a hive, not just when it freezes, Baker said. It’s a normal part of hive life.

Honeybees keep their house tidy, too. Bees generally won’t defecate in the hive. In the winter, they hold on to their waste until a warm day hits. When they break cluster, the bees exit the hive to relieve themselves, leaving spots of yellow on the snow.

“Later on in the winter, when they get a warm day where they can fly, they’ll get out for what’s called a ‘cleansing flight’ because beehives don’t have toilets,” Fetcher said.

When March warm ups come, Edmiston shovels hers out of the igloo-shaped snow that has slowly buried them to be sure the bees can buzz out to do their business.

“You can’t see the hives at all, and I’ll go out there on my skis,” she said. “The snow will actually melt into like a little igloo shape. They’ve been in this little insulated dome the whole time.”

The worker bees also carry out the bodies of the dead bees in cleansing flights.

Bees remain in cluster when temperatures fall below about 40 to 50 degrees. If it warms up, they’ll break cluster, stretch their wings and spread out a bit more to munch on the honey and pollen they’ve stored.

The cluster moves around the hive all winter, feeding on the honey the bees have built up in the warmer months. About 50 to 70 pounds of honey can get a hive through the winter here, though some beekeepers might choose to feed their bees extra sugar in the form of sugar water, corn syrup or pollen, particularly when the queen starts laying eggs, again.

While summer bees typically survive four to six weeks, the less active winter bees can survive for four to six months. There are no baby bees in the winter. Drones, or male bees, are driven out of the hive during the fall. Their only purpose in the hive is to mate, and the queen doesn’t lay eggs in the winter. By the end of December, she’ll slowly start laying to build up the colony, again. Bees will start foraging successfully when the dandelions start blooming, typically around May, Fetcher said.

Colorado bees pollinate California almond trees
For larger apiaries — those who have 1,000 hives or more — it can be a smarter business decision to ship bees to California for the almond pollination, Baker said.

According to Stanford University, California supplies more than 80% of the world’s almonds, and to do that, the state’s farmers need honeybees. Bees pollinate the almond flowers that eventually become the almond nut, and the state’s almond growth outpaces the number of domesticated bee hives in the state. California has 500,000 resident hives. It takes two million hives, two thirds of the nation’s commercial bee hives, to pollinate 250,000 almond orchards in the state.

Baker’s beehives make up about 430 of those two million hives. About 16 of Outlaw’s hives remain in Northwest Colorado through the winter. He said almond pollination makes up 60% to 70% of annual revenue for commercial apiaries.

“Big commercial beekeepers cannot afford to not have that income” he said. Though for smaller operations, it’s not cost effective.

It’s not without risks, though. Honeybees are similar to cows or sheep in that large concentrations of bees can mean disease spreads more quickly through hives.

Baker’s bees ship out on a 53-foot-long semitrailer in the fall. Those hives will start pollinating almonds when the bloom starts in late January. By March, the hives’ jobs are done. Baker’s bees then head to southeastern Utah. Others will move on to other states to pollinate apples, cherries, blueberries and other crops.

This practice concentrates hives together, putting them at greater risk of diseases and pests. A hive in motion is a stressed hive, which can give the bees a one two punch.

“Anytime you move livestock, especially truck them across the country, that stresses them,” Baker said. “If you’re already kind of sick or exposed to diseases or viruses, and you’re already weakened by stress and have an immune system that’s susceptible, that’s going to create some problems.”

An industry in flux
North American beekeeping has been hit hard by a myriad of challenges in recent decades, according to the U.S. Department of Agriculture — new pests and disease, loss of access to the flowering plants pollinators rely on, exposure to pesticides, lack of genetic diversity and the increase in migratory beekeeping. All of these factors overlap to contribute to an overall decline in populations of domesticated honeybees, and many of them also negatively impact native bees and pollinators.

After this crisis, the “save the bees” ethos emerged.

While honeybees are declining, they’re being managed by beekeepers whose primary goal is to keep hives alive to produce honey. Wild, native bee species are also seeing declines, without extra syrup delivered to their doorstep when they’re hungry.

Colorado is home to 946 native bee species, according to Colorado State University Extension, including the Western bumble bee, which is categorized as vulnerable on the International Union for Conservation of Nature’s red list, a step above endangered.

Many of these native bees are specialized to pollinate a specific plant species.

A study at Cornell University in Itacha, New York found that while the honeybee avoids pollen in favor of nectar, many native bees there were pollen collectors. The honeybee has developed into a charismatic mascot for these other, not-so-cute pollinators, Edmiston said.

“The biggest problem is probably in our wild pollinators, but that has brought up such an interest in this European nonnative bee, that suddenly all these people want to keep honeybees,” Edmiston said. “The good side of that is, if people are putting in pollinator gardens or choosing not to use pesticides because they want to save the bee, which in their mind is the honeybee, they’re really helping the native pollinators as well, which I think is phenomenal.”