Are you who you say you are? Guard bees inspect a forager at the entrance to a hive. Research from Washington University in St. Louis suggests that the gut microbiome is critical to communication for honey bees. (Photo: Nathan Beach)

For a honey bee, few things are more important than recognizing your nestmates. Being able to tell a nestmate from an invader could mean the difference between a honey-stocked hive and a long, lean winter.

New research from Washington University in St. Louis shows that honey bees rely on chemical cues related to their shared gut microbial communities, instead of genetic relatedness, to identify members of their colony.

“Most people only pay attention to the genetics of the actual bee,” said Yehuda Ben-Shahar, professor of biology in Arts & Sciences and corresponding author of the study published Oct. 14 in Science Advances. “What we show is that it is genetic, but it’s the genetics of the bacteria.”

Honey bees recognize and respond to chemical signals from other bees that they detect from skin compounds known as cuticular hydrocarbons, or CHCs. This study determined that a bee’s particular CHC profile is dependent on its microbiome — the bacteria that make up its gut microbial community — and is not something innate or genetic to the bee alone.

“Different colonies do in fact have colony-specific microbiomes, which has never been shown before,” said Cassondra L. Vernier, postdoctoral associate at the University of Illinois, who earned her biology PhD working with Ben-Shahar at Washington University.

“Bees are constantly sharing food with one another — and exchanging this microbiome just within their colony,” said Vernier, first author of the new study. 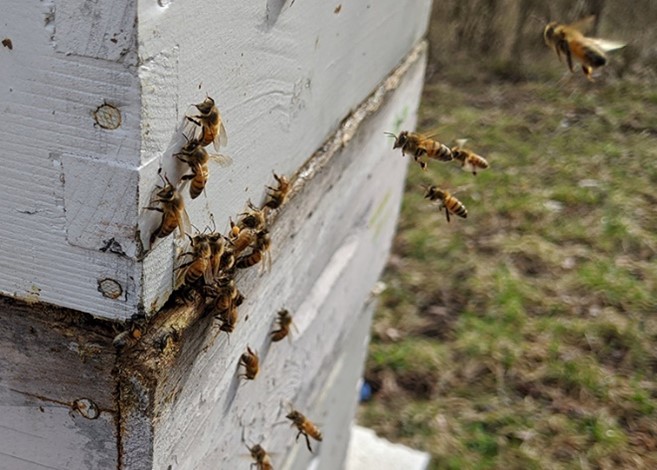 Co-authors include Gautam Dantas, professor of pathology and immunology and of molecular microbiology at Washington University School of Medicine in St. Louis, and Joel Levine at the University of Toronto Mississauga. The work was conducted in part with bees housed at Tyson Research Center, the environmental field station for Washington University.

“The importance of this paper is that it’s one of the first papers that actually shows that the microbiome is involved in the basic social biology of honey bees — and not just affecting their health,” Vernier said. “The microbiome is involved in how the colony as a whole functions, and how they are able to maintain nest defenses, rather than just immune defense within an individual.”

The gut microbial community — or microbiome — supplies humans and other animals with vitamins, helps digest food, regulates inflammation and keeps disease-causing microbes in check. Increasingly a topic of research interest, scientists have discovered many ways that the microbiome blurs the borders between a host and its bacteria.

The microbiome has been found to influence communication in several different organisms — including, notably, large animals like hyenas.

For honey bees, this study shows that the microbiome plays a critical role in defining the tightly regulated chemical signals for group membership.

Until recently, most scientists thought that honey bees identified nestmates by picking up on a homogenized scent that they recognize from members of their own colony — “a kind of hive B.O.,” Ben-Shahar joked.

Bee colonies are usually composed of highly related individuals. But the chemical signals that allow bees to recognize each other are not determined by genetics alone. Researchers know this because baby bees can be placed into other colonies without being rejected — up until a certain age and level of development.

“It has to be something that they acquire during their lifetime that defines their nestmate recognition cues,” Vernier said.

Acquired from interactions with other bees

In previous work, Vernier and Ben-Shahar showed that bees develop different scent profiles as they age, and that gatekeeper bees respond differently to foragers returning to the hive compared with younger bees that have never ventured outside. 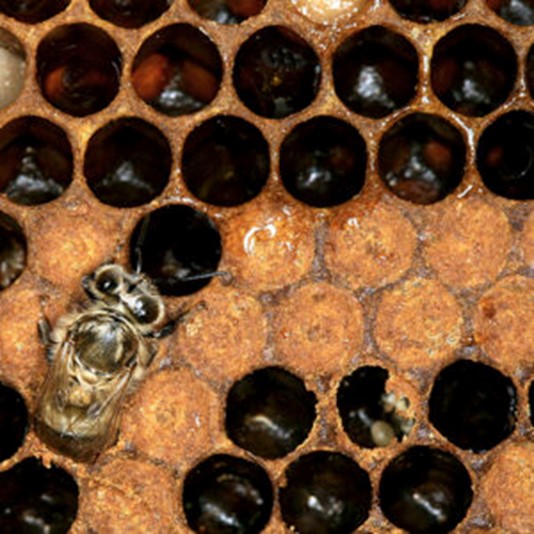 Earning a bee’s wings
That research established a relationship between nestmate recognition and the clearly defined, age-dependent division of labor typical to honey bee hives.

Only when a bee is old enough to interact with others outside of the hive does it become recognizable to others. That was a clue for the researchers.

“If you grow a honey bee in isolation, it will never develop a complete microbiome,” Vernier said. “It actually has to acquire most of it from interactions with other bees.”

For this study, researchers determined that forager bees from different honey bee colonies have different gut microbial communities and CHC profiles by sequencing gut samples and analyzing cuticular extracts. The scientists also conducted cross-hive fostering experiments, raising groups of newly hatched bees in either their own colonies or unrelated colonies.

In the fostering experiments, the researchers found that both source- and host-colony related factors contribute to variations in the overall gut microbial community of individual bees. Of the 14 microbial taxa that significantly differed between treatments, six were similar between bees that shared the same hive environment while they grew up — regardless of actual genetic relatedness.

The researchers also found that they could manipulate the microbiome of sister bees by feeding different microbes to newly hatched bees. In addition to developing different gut microbial communities, the bees also grew to have different CHC profiles.

“They were unrecognizable to their siblings,” Vernier said. “Manipulating the microbiome was enough to cause sister bees to develop different scent profiles.”

This new work is significant in part because it shows an integral role for the microbiome in the essential, everyday social interactions of honey bees, the Earth’s most important pollinators, researchers said.

“For bees, some of the most complex aspects of their social behavior basically depends on bacteria — more than anything else!” Ben-Shahar said.

“It doesn’t matter how related they are,” he said. “Their ability to say ‘you belong to this group’ basically depends on getting the right bacteria at the right time. Otherwise, they are blind to it.”

And bee ID is key.

The biggest enemy to honey bees is other bees.

Paint-marked honey bees from the behavioral portion of this study. (Photo: Cassondra Vernier)

“During fall, when plants stop producing nectar, there is a period of time when robbing is very prevalent in colonies,” Vernier said. “Robbing bees will find other colonies, and if they’re able to get in and take some honey, they will go back to their own nests and signal, ‘Hey, go over there. There’s a nest that’s not good at guarding, and we can steal their honey.’

“Robber bees will take that honey and leave the other colony to starve,” she said. “It’s a very strong pressure.”

Robbing deprives both the host bees and their associated bacteria with important resources — which may have been the original drive to form this special bacteria-animal partnership, the researchers said.