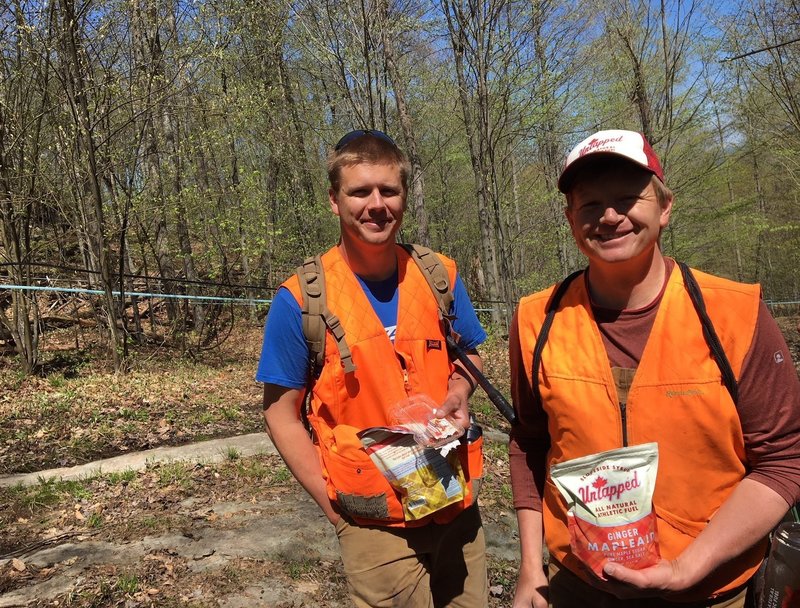 The outrage is particularly strong in Vermont, the nation’s top producer of maple syrup, where it’s illegal to adulterate maple syrup with cane or beet sugar and sell it as the real thing.

At Slopeside Syrup, in Richmond, Vt., Roger Brown and his brother, Doug, are cleaning up from a season during which they made about 6,600 gallons of syrup.

Parts of the operation are high tech. Pumps and tubes help deliver the sap to holding tanks; a reverse osmosis machine concentrates the sweetness in the sap before boiling. But since the sap run ended, they’ve also spent weeks hiking across 600 very steep acres to pull some 23,000 taps from trees by hand.

“I think you pull about a thousand spouts per day, per person,” Roger Brown said.

“On a long day,” his brother chimed in.

The crew moves quickly through the woods, which on this May day are full of birdsong and blessedly free of black flies. Roger Brown uses a long tool with a hammer claw on the end to pull the spouts. He caps the line and it seals with vacuum pressure, which also helps clear the line of old sap.

This hard work is at the heart of what make their product different from the other stuff called “syrup” on store shelves.

“My first reaction when I heard about it was: ‘Boy, great, right?'” he said. “Added sugar is going to have to be labeled, and maple syrup, obviously, there’s no added sugar, so it’s not going to have to have the labeling.”

“But all the other fluid products that we compete against — Mrs. Butterworth, Log Cabin — whatever,” he said, “those all have added sugars, so they’re going to have to have added sugar labels. So that’s a great differentiator for us.”

But the FDA had something else in mind.

As part of a campaign to educate consumers about excess sugar in their diets, the FDA wants to label maple syrup as containing “added sugar,” meaning an additional amount of sugar in your diet.

“It just became apparent that the FDA wasn’t going to sort of bow to reality, or bow to a standard interpretation of the English language,” said Roger Brown. “And so was going to continue to say, ‘no, added sugar’ doesn’t mean sugar added to food, it means sugar added to your diet in excess of what’s nutritionally appropriate.”

The FDA says the proposed label is part of a campaign to educate consumers about how much sugar they eat.

“The updated nutrition facts label will really help consumers be aware of added sugars in the diet that are coming from all sources,” said Dr. Susan Mayne, director of the FDA’s center for food safety and applied nutrition.

Mayne said federal dietary guidelines say that Americans should get no more than 10 percent of their daily calories from added sugar. Too much sugar, she pointed out, can lead to obesity and diabetes.

“This is really aimed at giving consumers information they need to try to stay within that 10 percent of daily calories recommendation that comes out from the dietary guidelines,” she said.

But why say on the label that sugar is “added” to maple syrup, when it’s not?

Mayne said the FDA has proposed a compromise: It will allow additional language to state the sugar is found naturally in honey and maple products.

“And that was our suggestion of how honey and maple syrup producers can explain on food labels that, for example, all of these sugars can come from pure maple syrup,” she said.

“I think it’s confusing, and confusing labeling hurts everybody,” he said.

Roger Brown’s work these days is not all in the woods. He’s traveled to Washington, D.C., to meet with the FDA and to confer with the state’s congressional delegation on a response to the new labeling requirement.

Vermont sugar makers and their trade association have found allies among honey producers — who would also be covered by the labeling requirement.

Roger Brown says that makes for an interesting political dynamic.

“There is more Republican honey production, you could say, than there is Republican maple production,” he said. “Maple is not quite all blue, but it’s more blue than honey. And there’s not a lot of honey in the Northeast where maple is concentrated … So it’s a great kind of team to work on his stuff.”

Earlier this week, Vermont’s Attorney General T.J. Donovan visited Slopeside Syrup and called on the federal government to amend its proposed guidance on requiring maple and honey producers to declare “added sugar” on their labels.

“I support clear and transparent labeling, and I support common sense,” Donovan said. “That is why I stand with Vermont’s sugar makers to ask the FDA to amend its guidance so that consumers are not led to believe that anything is added to their 100 percent pure Vermont maple or honey products.”

Donovan also announced that his office had created a web page where Vermonters can comment on the proposed federal rules.

“Vermonters have stood behind maple for generations and sugar makers need their support again,” said Brown. “Please tell the FDA what every Vermonter already knows — pure maple syrup has no added sugar.”

The FDA is accepting public comment on the new rules until June 15, and has given maple and honey producers up to three years to comply with the new labeling requirements.