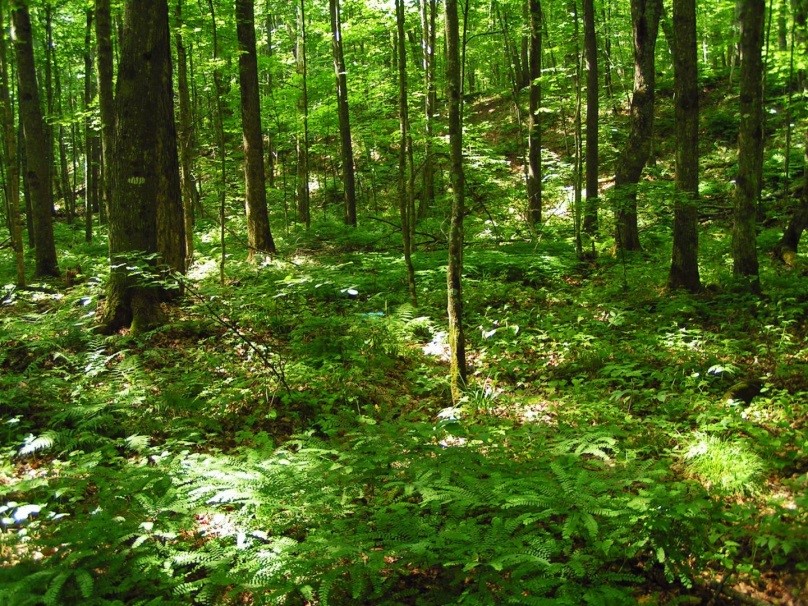 The rich understory vegetation in a forest with no earthworms. (Photo Paul Ojanen/University of Minnesota)

Invading European earthworms are being blamed for a decline in plant diversity in North American forests.

German researchers, working with colleagues in the United States and Canada, say they have found that in invaded forests, the vegetation on the forest floor has changed dramatically.

The scientists from the German Center for Integrative Biodiversity Research and Leipzig University say while the earthworms are classified as beneficial organisms in Europe, many North American ecosystems are not adapted to the subterranean burrowers.

This is because almost all earthworms became extinct in North America during the last ice age, which ended about 12,000 years ago. When the ice retreated, new ecosystems adapted to soils without earthworms emerged.

But now, several earthworm species live again in North America, introduced by European settlers and then spread by anglers.

The earthworm invasion is spreading through the forests at about 16 feet a year and is altering the physical and chemical properties of soils.

The best-known earthworm in central Europe, the Lumbricus terrestris, carries alkaline soil upwards from deeper layers. On the forest floor, the leaf litter vanishes as it is eaten up by the worms and turned into humus. As a result, the nutrients stored in the leaves become quickly available to the plants. As well, the soils dry out easily as water drains away readily.

Many native plants cannot thrive under these circumstances, which is why the species diversity of the forest understory is decreasing.

Wherever the worm creeps, the goblin fern (Botrychium mormo), has become rare. Other plants are also threatened by the earthworm invasion, such as the largeflower bellwort (Uvularia grandiflora), the Japanese angelica tree (Aralia elata), the forest lily (Trillium spp.), the Solomon’s seal (Polygonatum spp.) or the tormentil (Potentilla erecta).

Conversely, the Germans report, the worms prepare the soil for non-native plants that are used to living with earthworms. Grasses also grow well in invaded forests because their fine roots can quickly absorb soil nutrients, particularly nitrogen, and can tolerate summer droughts.

The earthworms also eat small seeds of certain plant species and thus directly influence the composition of the forest understory. Because earthworms live in different soil layers and their effects are cumulative, the more types of earthworms that live together in one location, the more plant species vanish.

The German researchers evaluated data from 14 studies and published their findings in the journal Global Change Biology. Their results demonstrate, for the first time, a general pattern between the decline in species diversity in North American forests and the spread of European earthworms.

“The earthworm invasion has altered the biodiversity and possibly functioning of the forest ecosystems, because it affects the entire food web as well as water and nutrient cycles,” says Dylan Craven, lead author of the study.

Team member Prof. Nico Eisenhauer was recently given €1.5 million (US$1.68 million) by the European Union to investigate the consequences of the earthworm invasion.

“The long-term impact (of the worms) could be massive and be exacerbated further still by climate change,” he says.

World Honey Report, by Ron Phipps of CPNA International, Ltd. The geo-political tensions between: 1. Ukraine and Russia, 2. Vietnam and China, and 3….