‘This is Total Devastation’ 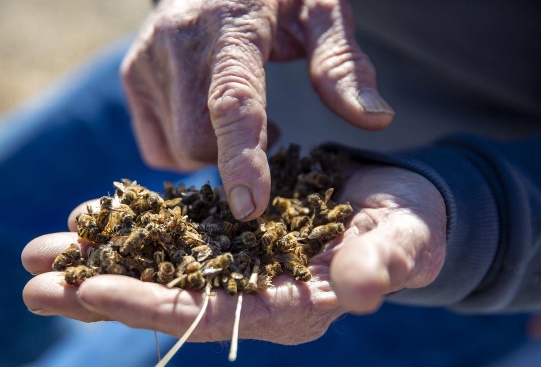 “It’s devastating,” Tony Kaneaster of Kaneaster Apiary said. “This is just totally devastating. They can’t pick up from something like this.”

Kaneaster grabs a handful of bees from the inch-deep row and sifts through them. They’re light and fuzzy in his hand. The living bees constantly clean out the deceased and push them out of the hive, and gusts of wind can blow away the corpses quickly, so these bodies are fresh.

“Skunks will come in and eat them dead bees on the ground,” Dave Kaneaster, Tony Kaneaster’s father, said. “They don’t stay there very long.”

The Kaneasters have bee yards throughout the Magic Valley, but it’s their hives between the Hagerman Valley and a bit north of Bliss that are dying in droves. Fourteen of their hives have been decimated in the past few weeks. Six of those have been completely wiped out. The Kaneasters run about 100 yards, although not all of those yards are always full of bees.

Three weeks ago this yard of 72 white bee boxes near the Snake River seemed healthy. The Kaneasters nailed the hives shut to prep them for the trek to California, where they would have pollinated almonds in January and February.

Almond pollination is how the Kaneasters, and most Magic Valley beekeepers, make the bulk of their money, but with their bees dying by the minute, the Kaneasters don’t expect these insects to survive long enough to make the journey. They don’t know what to do.

“I’m not even sure if I’m in business,” Tony Kaneaster said. “We’ve got to have the bees or we aren’t going to eat.”

Dave Kaneaster bought a thousand hives when he was 20. Now he’s 76 and has been in the bee business in Gooding for 56 years. His license plate reads HONEYBZ.

Tony Kaneaster has been in the bee business with his father for 40 years. The 49-year-old and his dad have seen their bees die by the thousands a few times in the past decade.

“This is 100% loss,” Tony Kaneaster said. “Before, it was a loss once in a while and (the bees) could start working out of it. These are completely dying.”

While this is the worst year the Kaneasters have had, bad years have been more common over the last decade. In the Magic Valley, bees began noticeably declining about a decade ago, and five years ago the die-offs started to pick up. For the Kaneasters, last year was almost as bad as this year.

They used to have 5,000 hives. Last year that number slipped to 3,000. When they figure out how many of their bees survived this year, they expect to be down to 2,000.

Kay Miller is a beekeeper with B&B Apiaries in Buhl. She said B&B’s losses this year haven’t been as catastrophic as the Kaneasters’, but last year was concerning, and this year doesn’t look much more promising.

“It’s steady bee loss,” Miller said. “We just don’t know what to do or how we’re going to fix it.”

In 2018, Miller estimates B&B lost 60% of its hives. This year, the company has lost a bit less than a third of its hives, but more bees will die in the winter. She said three beekeepers in the Buhl area have gone out of business in the past decade.

Bill Lemmons owns B&B Apiaries. He’s been working with bees since 1945 and worries that if something doesn’t change, there might not be many bees left in the Magic Valley. Lemmons would like to sell his bees but said there isn’t much of a market for them because south-central Idaho lacks a good honey crop. Plus, his bees are dying.

“It’s disheartening,” Lemmons said. “I just can’t turn my back on them and walk away, just let them die out and rot. I’ve been doing it too long.”

Jed McGuire owns McGuire’s Apiary in Gooding. McGuire’s done alright in 2019, but he lost 85% of his hives last year. He’s running half the hives he ran a year ago.

“It’s crushing,” McGuire said of his dead bees. “You work and work all year, and then it all falls apart.”

The Kaneasters don’t know for sure what’s killing their bees, but they have an idea: fungicides, chemicals farmers spray on their fields to protect their crops from fungal diseases.

There are some eerie signs of unusual deaths for the Kaneasters’ bees. For instance, many of the dead insects are inexplicably headless.

Many of the lifeless bodies’ tongues are sticking out, which the Kaneasters say means the bees starved to death.

Fungicides can affect a larva’s immune system and create microbial imbalances in its gut. That can pave the way for mites and other pests to grow like weeds inside the larva, starving it of nutrients.

“(The larva) starves to death right in the comb,” Dave Kaneaster said.

Fungicides can effectively act as pesticides for bees, the Kaneasters said, even if there are different rules for how they’re applied.

When farmers spray their crops with pesticides or herbicides, they’re often required to give notice to neighbors. That alert is critical for beekeepers because it gives them time to move their bees so they don’t get sprayed. Bees die when hit by a spray directly.

But the Kaneasters said the Idaho State Department of Agriculture might not require farmers to give the same notice for fungicides, which are frequently sprayed on corn and potato fields. The laws on fungicide application might be different, they said.

According to the Kaneasters, the agency is investigating their bees for disease but not for chemically caused deaths.

“They decided they weren’t going to take samples (for chemicals),” Dave Kaneaster said. “The state Department of Agriculture doesn’t seem to want to help find out what is killing them.”

The Kaneasters are nearly positive that their bees were killed by some sort of fungicide. But there are a host of factors contributing to bee deaths in Idaho and throughout the country.

Ryan Razee is a co-owner of Belliston Brothers Apiaries in Burley. He said that his company lost 48% of its hives last year, but this year hasn’t been quite as grim. Razee’s business manages hives from northern Utah up to Rupert, and west to Eden.

Razee thinks mites were the cause of a bad year for his company in 2018.

“We got hammered last year,” he said.

While the Hagerman Valley appears to have been hit especially hard, there are signs that it’s been a bad year for bees in several states. Belliston Brothers Apiaries also stores bees in the winter and holds hives from the states such as the Dakotas, Minnesota and Illinois.

Mites have led to beekeeper losses, but new farming techniques have taken a toll as well.

“In this valley, farming practices have pretty much killed the beekeeper and put him out of business,” Miller said.

Some beekeepers said that there’s more spraying now than there used to be. McGuire also noted that there’s hardly anything left for the bees to eat in the Magic Valley.

“There’s just no food source for them (bees),” McGuire said. “There’s no hay anymore — they cut it before it blooms.”

He also pointed out that the Twin Falls Canal Co. no longer allows weeds to grow in its ditches, which means fewer flowers for bees.

Because of those changes, and the availability of cheap imports, Magic Valley beekeepers can’t make a living off honey alone. Trucking their bees down to California for the almond pollination season is what keeps them in business.

Some Magic Valley beekeepers send hives to the onion and carrot fields of western Idaho for pollination, but the Kaneasters stopped going to those harvests because they say those also wallop their bees. say it is also contributing to their bee decline. Now south-central Idaho is merely a place to rebuild depleted hives, they said — a place to prepare for the next round of almond pollination.

“I’ve been in this business 56 years,” Dave Kaneaster said. “I don’t even know what I’m looking at anymore.”

Bees have been in the Kaneasters’ blood for a half-century. But they might not be able to hold on much longer.

After last year’s losses, the Kaneasters bought 2,750 new queens to replenish their ailing hives — beekeepers create new hives by splitting an existing one in half, then adding a queen. Many of those 2,750 queens, which cost $28 each, are now dead. They can’t afford to replace that many queens every year.

Miller and McGuire both wondered if Magic Valley beekeepers can keep handling tough years forever. Neither would be surprised to see more beekeepers start tapping out.

The Kaneasters want help and answers.