Beekeeping Club Shares The Sweet Side of Bees 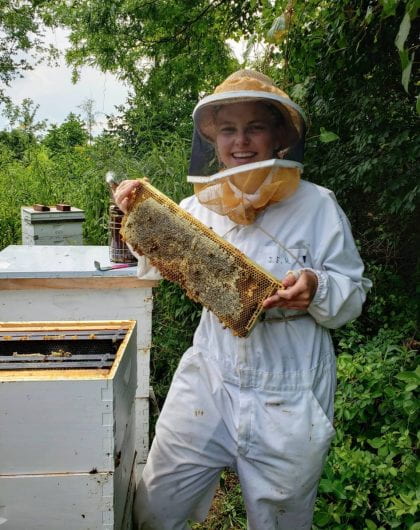 Adrianna Pollee, a fourth-year in forestry, fisheries and wildlife and a member of the Beekeeping Club at Ohio State, holds a honey frame from a bee hive.

A new club is creating a lot of buzz on West Campus.

Established this past spring, the Beekeeping Club at Ohio State works to raise awareness on campus about the importance of bees to agriculture and the environment, according to the student organization page. Weather permitting, the club also works hands-on in bee hives.

Adrianna Pollee, a fourth-year in forestry, fisheries and wildlife and a club member, said she found an interest in bees after taking a beekeeping course with Reed Johnson, an associate professor in entomology and the club’s adviser. Since then, Pollee has worked at the Rothenbuhler Honey Bee Lab and advocated for bees.

“A lot of times, when people think of beekeepers, they’re old men in overalls with their hives in the woods, but it’s really cool to blend that tradition and also the scientific angle of it into one,” Pollee said.

Harper McMinn-Sauder, a graduate student in entomology and the club’s co-adviser, said her passion for beekeeping came from beekeeping with her grandfather in high school in Kansas. When McMinn-Sauder conducts research, she said getting stung is a normal, everyday ordeal to which her body has learned to adjust.

McMinn-Sauder’s research relates to honeybee nutrition and how a colony’s nutrition impacts its overall health. She said bees’ health is important for a number of reasons.

“They’re economically important,” McMinn-Sauder said. “We need them for our food like almonds, blueberries and pumpkins. Roughly a third of our food is pollinated by honeybees.”

Pollee said bees are the main pollinating source for cultivated crops, and the economic value of pollination is estimated to be more than $3 billion each year.

“Your diet would be a lot less exciting if it weren’t for bees and pollination,” Pollee said. “They do play a very critical role in keeping ecosystems healthy and providing us with the luxuries that we sometimes take for granted.”

Pollee said the survival rates for bee hives in Ohio throughout the winter is low, but depend on the severity of the winter. Club members make efforts to prepare the bees stored at the Rothenbuhler Honey Bee Lab for winter.

“When we over-winter them, it just means that we’re helping them prepare to not go out and forage because there’s nothing to forage on in the winter,” Pollee said. “We’ll give them extra pollen patties or extra sugar water and just make sure that they have all the resources they need in order to survive the winter.”

Pollee said bees are more threatened now than ever due to pests, colony collapse disorder and monoculture farming.

According to the EPA, colony collapse disorder is a phenomenon in which bees abandon their hive en masse for poorly understood reasons. Monoculture farming, the practice of growing a single crop at a time in a large area, leaves bees without food after the brief blooming period ends, according to Scientific American.

“There is a need for people to want to help conserve bee populations. If we don’t have the bees, then we lose a lot of the luxuries that we have now,” Pollee said. “It’s definitely a fruitful skill to have, and it feels really awesome to do it, too.”