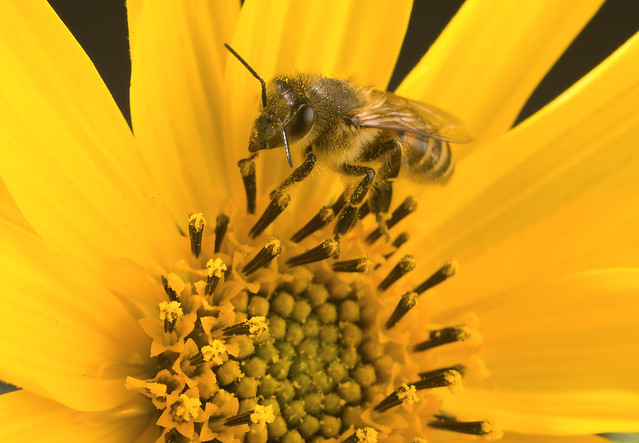 A bee gathering pollen and nectar from a helianthus flower.

Everyone wants healthy, thriving honey bee colonies. One-third of the food we eat requires pollinators, and commercial beekeepers transport honey bees hundreds of miles each year to pollinate almond trees and other crops.

A scientist with USDA’s Agricultural Research Service (ARS) and his colleagues have found that honey bee colonies foraging on land with a strong cover of clover species and alfalfa do more than three times better than colonies put next to crop fields of sunflowers or canola. The study was recently published in Scientific Reports.

The scientists placed managed honey bee colonies next to land in the USDA Conservation Reserve Program (CRP) in North Dakota and let the bees forage from May to October. CRP lands are reserved for long-term conservation efforts and are often home to a wide variety of flowering plants that bees find appealing.

The CRP colonies had better health, more bees and greater ability to turn nectar and pollen into vitellogenin—a compound that serves as the base for producing royal jelly, which bees use to nurture larvae and turn larvae into queens. Vitellogenin is also a critical food storage reservoir for honey bees.

After spending six months foraging on CRP land and then overwintering, more than 78 percent of the colonies in the study were graded A, the level commanding the highest price for pollination services in January.

Of the colonies kept near intensely cultivated fields and then overwintered under the same circumstances as the CRP colonies, only 20 percent could be rated Grade A.

“With California almond growers having paid an average of $190 per Grade A colony in the 2018 almond pollination season, the need for beekeepers to have access to land that has diverse and substantial nectar and pollen sources is obvious,” explained ARS research microbiologist Kirk E. Anderson. Anderson is with the ARS Carl Hayden Bee Research Center in Tucson, Arizona.

Anderson and his team, including ARS molecular biologist Vincent Ricigliano, found that greater stores of vitellogenin were the best predictor of colony size after winter. The protein-rich compound prolongs the lifespans of queens and forager bees and strongly influences key behaviors that increase colony survival.

This study highlights the value of high-quality forage, such as that provided by CRP land, to honey bee production in the Northern Great Plains region, which hosts close to half the U.S. managed bee population (about 1 million colonies) from May through October.