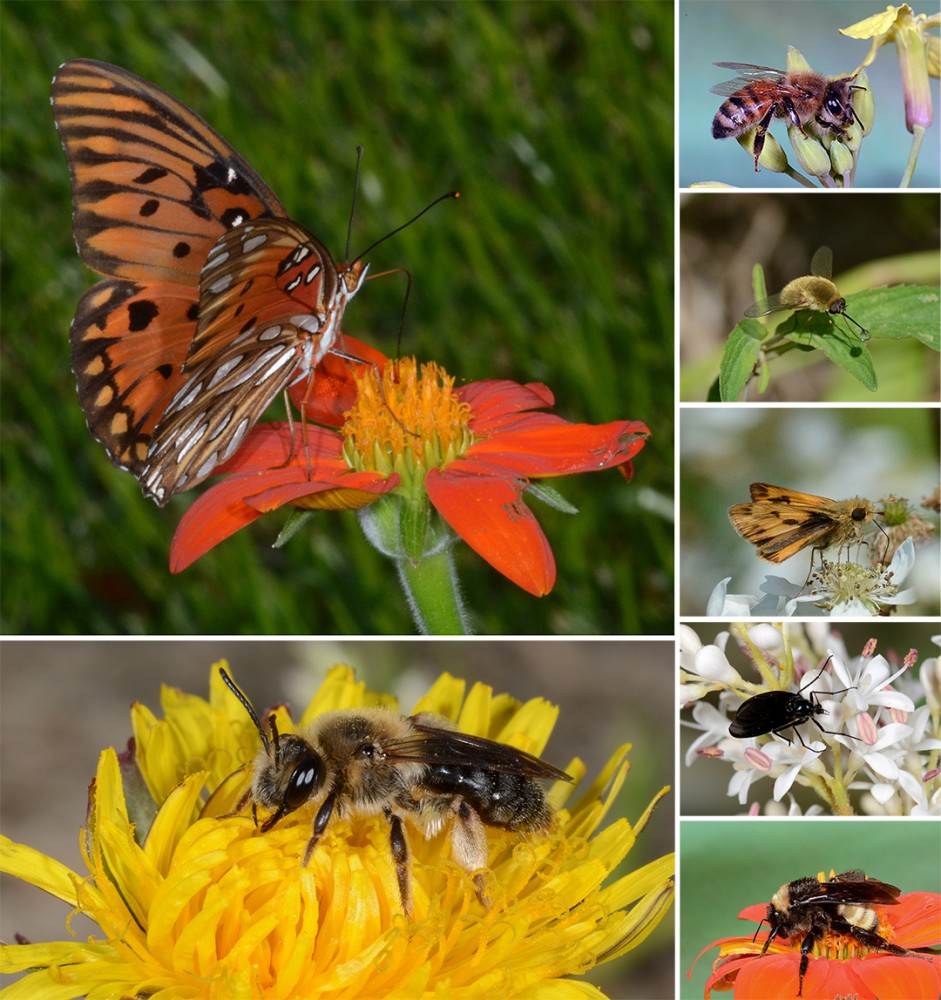 CHARLESTON — Besides adding beauty to a field of watermelons, colorful patches of wildflowers might also provide benefits that would improve the quality and increase the yield of one of South Carolina’s most important vegetable crops.

Ongoing studies based at Clemson University’s Coastal Research and Education Center are investigating how a more diverse agroecosystem — swarming with native bees, wasps and other beneficial insects – might complement honeybees and enhance watermelon production.

“We’ve been surveying wildflowers for about three years and have a pretty good handle on most of the major native pollinators: bumblebees, carpenter bees, leaf-cutter bees, ground-nesting bees; there are a lot of different bees,” said Merle Shepard, professor emeritus of entomology at Coastal REC and also chair of the agricultural committee for the Agricultural Society of South Carolina. “Habitat destruction, pesticides and diseases are contributing to a rapid decline in our bee populations, so we need to better understand the systems that help pollinators thrive. Because if we don’t the situation will continue to worsen.”

According to Shepard, native bees pollinate about 75 percent of all plants in the United States and are responsible for billions of dollars in agricultural production. Without proper pollination, plants often produce small or misshapen fruits, as well as poor yields.

“When our forefathers were cultivating crops there was no need for additional pollinating species because native bees were present in sufficient numbers to carry out the task,” Shepard said. “The farms were relatively small, with lots of undisturbed habitat and a wide diversity of flowering plants and nesting sites. Unfortunately, there has been a serious decline in both cultivated honeybees and native bee populations. Today, the farm landscape is very different with large expanses of crop monocultures.”

To make matters worse, Shepard said, most growers now “clean” the borders of their fields to slow the encroachment of weeds. But this causes a serious loss of plant biodiversity that once supported native pollinators. Urban sprawl is another major culprit, destroying plants and nesting sites.

“Agriculture’s gotten bigger and bigger and we have these huge farms,” Shepard said. “I understand the economics of all this. But without biodiversity, a single disease or certain kind of insect can wipe out an entire crop. There’s a fundamental ecological principle that says ‘diversity leads to stability.’ And so, when you have one crop planted in a huge area, you’re setting yourself up for trouble.”

Thanks to funding from the Agricultural Society of South Carolina and the National Watermelon Promotion Board, Shepard has helped sponsor a Clemson graduate student to spend the next several years researching how to enhance watermelon agroecosystems to attract native pollinators.

“The objective of our study is to find a simple, cost-effective way for watermelon farmers to attract native pollinators to their fields. Then we will test whether attracting these native pollinators leads to watermelon yields comparable to fields where honeybees are the major visitor,” said Mimi Jenkins, whose experiments will be conducted at Coastal REC and also at about a dozen other fields in various areas of the state.

“We will explore the hypothesis that the diversity and abundance of native pollinators is greater in a watermelon field that includes wildflowers than one that does not thanks to additional food resources and nesting areas. We will also be looking to see if native bee populations can provide pollination services for farmers that are comparable to what honeybee colonies provide, potentially eliminating or reducing the need for domesticated honeybees on watermelon farms. Previous research in other parts of the country shows that this is likely if the right conditions are established.”

Jenkins, who will begin most of her days on the job before the sun rises, will use a combination of nets and traps to capture native bees and insects and take them back to Shepard’s lab for identification. She will also be measuring how much pollen certain varieties of native bees are able to deposit in a single visit to determine which species are more efficient at pollinating watermelons.

“I’ll be observing and recording the frequency of insect visits and I’ll be netting insects and collecting them in vials,” Jenkins said. “I’ll sneak up on a bee as it’s foraging on flowers and put the net over the top of it. Bees always fly upward, so if I hold the back of the net up straight, the bee will fly up into it and then I can close the bottom of the net off. I will also use ‘bee bowls’ — colorful bowls containing soapy water — to collect insects. Then I’ll bring the insects back to the lab where they can be identified using a microscope.”

Brian Ward, a research specialist at Coastal REC, will soon be planting three varieties of watermelons — Quetzali Seeded, Crimson Sweet Seeded and Melody Seedless — that will be grafted onto Carnivore, Super Shintosa and Bull Dog root stocks. The one-acre test site at the REC will also contain more than a dozen varieties of wildflowers, including zinnias, asters, cosmos, bachelor’s buttons and black-eyed Susans. The wildflowers, which typically bloom throughout the spring and summer, will be planted first, followed a month or so later by the watermelons. In South Carolina, watermelons are typically planted in April and May and harvested by mid-July.

“I’ll be the boots on the ground,” said Ward, who oversees 15 acres of organic research as part of the 325 acres at Coastal REC that contain a variety of vegetables and grains, most of which have centuries-old landrace, heirloom or heritage ties. “The habitat we’ll create by planting wildflowers will also harbor other insects like large wasps that will be predators against caterpillars and microscopic wasps that feed on aphids and other tiny pests.”

Ward hopes the outcome of this research will eventually benefit large commercial growers.

“The ideal situation for most watermelon growers will be to plant about six rows of watermelon and then have a blank row, and then six more rows and then a blank row,” Ward said. “The blank row is there for the harvesting machine and spray tractor to drive down. But it would also be where they would plant their wildflowers. So if you looked at an aerial view of their field, there would be seas of green interlaced with stripes of brilliant color.”

Most watermelon farmers ensure pollination by maintaining beehives on their properties , which can be expensive and labor-intensive. Though honeybees remain one of the world’s most important pollinators, they tend to stay in their hives when it’s cold or rainy, while many native bees will continue to work, regardless of the weather.

Since the mid-20th century, multiple problems have caused the honeybee population to dwindle, highlighted by a drastic decline around 2006. Relying on only a handful of managed species to provide the pollination services required for a third of the world’s food supply can be risky and unsustainable.

“I think this is a great project that we’re pleased to help support,” said Mark Arney, executive director of the National Watermelon Promotion Board. “With the collaboration of Clemson University’s Coastal Research and Education Center and the U.S. Vegetable Laboratory, as well as the excellent work being done at the Edisto Research and Education Center and other facilities around the state, it’s not an exaggeration to say that South Carolina has become an epicenter of watermelon research.”