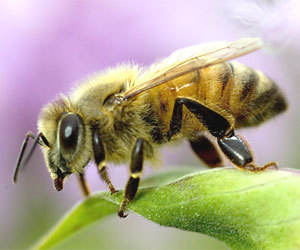 A type of insecticide widely used to treat crops such as cotton and soy beans poses little risk to pollinators, including honey bees, an Arkansas-based researcher has concluded.

Gus Lorenz, associate head of entomology at the University of Arkansas, said his research shows there is little risk to pollinators from neonicotinoids, including one of its class, the commonly used imidacloprids.

Other research conducted by the University of Tennessee and Mississippi State came to the same conclusions, Lorenz said in a podcast for the Arkansas Farm Bureau, a lobby and support group for farmers in the state.

“We have done a considerable amount of research on (neonicotinoid) treatments,” Lorenz said. “Basically what we found is that the treatments have very little risk to pollinators like the honey bee.”

Lorenz and his team treated plants in the field and studied what happened.

“It became quickly apparently to us (that) by the time the plant begins to bloom there is very little expression of these insecticides on the plant,” Lorenz said. “There are fairly high levels when the plant first comes out of the ground, but as the plant continues to grow and develop those residue levels go down very quickly.”

He said protection of the plant from insects runs out, usually after four to five weeks.

“When we looked at the literature that first hit out there in the media, it was that these (bees) were coming to the flowers that had been treated with (neonicotinoids), and that they were getting a dose of these insecticides and carrying them back to the hive,” Lorenz said. “That’s not the case.”

Research and subsequent reports in the media suggested there is a link between this type of insecticide and honey bee colony collapse, a phenomenon where the majority of bees disappear from a hive, often leaving just the queen.

But Lorenz argued, “It appears, by and large, if there’s anything left by the time the pollen plant begins to bloom, it’s generally way below levels that are toxic to honey bees.”

Lorenz said the value of crops such as cotton, rice and soy beans to growers in Arkansas and the Mid-South is hugely important.

“These classes of insecticides are extremely important to our growers to maintain their yield potential,” Lorenz said.

The Environmental Protection Agency (EPA) on Jan. 7 announced a preliminary pollinator risk assessment for the neonicotinoid insecticide, imidacloprid. It concluded there was a threat to some pollinators.

The EPA’s assessment, prepared in collaboration with California’s Department of Pesticide Regulation, stated that imidacloprid potentially poses a risk to hives when the pesticide comes in contact with certain crops that attract pollinators

The preliminary risk assessment identified a residue level for imidacloprid of 25 ppb, the threshold above which there is likely to be an effect on pollinator hives. At that level or below, there is unlikely to be any effect on the bees and hives, the report stated..

The effects include decreases in pollinators as well as less honey produced.

Data show that citrus and cotton may have residues of the pesticide in pollen and nectar above the threshold level, the report concluded.

Additional data is being generated on these and other crops to help evaluate whether imidacloprid poses a risk to hives, the EPA said.

So, it seems, the jury is still out on this class of compounds.

In 2015, the EPA proposed to prohibit the use of pesticides that are toxic to bees, including the neonicotinoids, when crops are in bloom and bees provide pollination services.