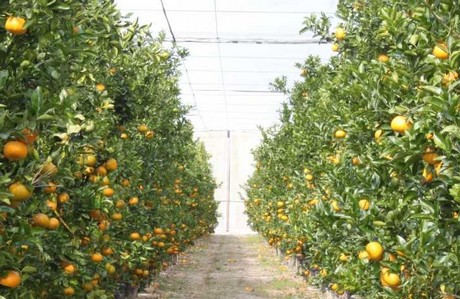 Using Citrus Under Protective Screening, or “CUPS,” growers can keep the Asian citrus psyllid away from their trees, said Arnold Schumann, a professor of soil and water sciences at the UF Institute of Food and Agricultural Sciences. If an infected psyllid – a bug the size of a pin – bites citrus leaves, it infects trees with a bacterium that sickens them with greening, also known as Huanglongbing, or HLB.

During the four years of the CUPS experiment, UF/IFAS researchers have seen no psyllids or greening on the citrus grown in the screened-in environment, said Schumann, a faculty member at the UF/IFAS Citrus Research and Education Center (CREC) in Lake Alfred, Florida.

When they built the indoor citrus growing system, UF/IFAS researchers – knowing they faced the potential of tropical storm-force winds – had anchors installed on the poles that keep the screens in place, Schumann said. Those worked fairly well during Irma, but there was room for improvement, he said.

“After Irma, we found widespread but not catastrophic damage, mainly due to high winds over a long time,” Schumann said. “The trees inside the CUPS were mostly unaffected, with almost no fruit drop occurring and no canopy damage. A few trees growing in pots were leaning over or fell over due to the wind.”

“Many of the construction methods used for our CUPS had not been storm-tested before,” Schumann said. “This direct hit by a hurricane was a thorough performance test that exposed weaknesses and failures, which we could learn from and improve in future CUPS construction projects.”

As a result, UF/IFAS researchers installed turnbuckles, which are threaded, swiveling devices that can be easily adjusted for tightening the cables.

Irma wreaked havoc on Florida’s citrus industry, knocking 50 to 90 percent of the state’s fruit to the ground in some areas, and causing an estimated $760 million in damage, according to the Florida Department of Agriculture and Consumer Services. That destruction was largely confined to citrus grown outdoors.

UF/IFAS researchers work with the growers who adopt CUPS by sharing knowledge and experiences.

In addition to helping protect against storms and greening, UF/IFAS researchers are trying to make CUPS affordable to growers.

The structure and mesh account for most of the $1 per square foot cost of the CUPS system at CREC, said Ariel Singerman, a UF/IFAS assistant professor of food and resource economics at the center. Using preliminary data available from the CUPS program, UF/IFAS researchers made projections for the remaining years of the investment and found that a price of $24.15 per box of fruit results in a grower breaking even.

“We consider CUPS as a medium-term solution for growing fresh fruit in HLB-endemic regions like Florida, where currently no other viable solutions exist,” Schumann said.

Many factors play a large role in the effectiveness of CUPS, said Schumann. Those include optimizing fertigation – when growers inject fertilizers and other water-soluble products into an irrigation system. CUPS’ success also hinges on improved planting density to produce high, early yields and choosing varieties with the best consumer preference – for example, those that are seedless or easy peeling.

“Meanwhile our research strives to optimize those factors affecting profitability that we can control,” Schumann said. For example, growers have little control over fruit price, he said.

But by planting early maturing varieties picked before competitors’ fruit in other regions like California, growers in the Sunshine State can get better market prices, he said.

UF/IFAS researchers have studied CUPS for four years, using grant funding from the U.S. National Institute of Food and Agriculture, an arm of the USDA.

American Chemical Society The decline of honey bees has been a major concern globally for the past decade. One of the factors that could…