Farmers in Central America have been practicing beekeeping for hundreds of years. 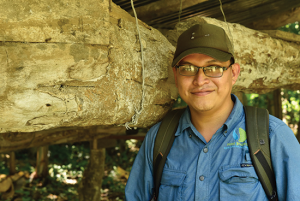 Now, Paso Pacifico, a biodiversity conservation organization based in Ventura, California, is working with farmers in Nicaragua and introducing educational programs for children to ensure this tradition continues as an integral part of the culture for generations to come.

Leading the way for Paso Pacifico is Bee Project Coordinator Marcos Calero, who has become a local bee biodiversity expert in Nicaragua’s Paso del Istmo Biological Corridor. Calero, who has been with Paso Pacifico for more than six years, regularly meets with farmers in the region to discuss the ecological significance of their work and provide training on innovative ways to manage their hives.

While some of the farmers may be skeptical when first approached by Calero, they quickly realize that both parties share a strong desire to protect and conserve these populations of stingless bees, and that working together can produce more favorable outcomes. Due to deforestation, an increase in pesticide use, and the overharvesting of honey from the forest, native bee populations have been on the decline, so any insights on effective, sustainable beekeeping practices are typically welcomed. Paso Pacifico also connects the farmers with stores in Rivas and Managua, where they can find a fair price for their product.

One of the innovative practices Calero suggests is the transfer of hives from logs and branches to specially-designed wooden boxes, which allows for honey to be harvested in a manner that is less disruptive and more sanitary. Additionally, the wooden boxes make it easier to monitor the bees, and provide the ability to divide and increase the number of hives without having to remove more native trees and branches from the forest. 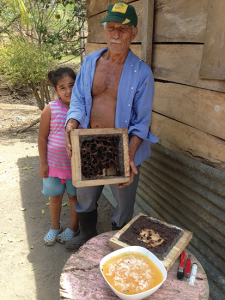 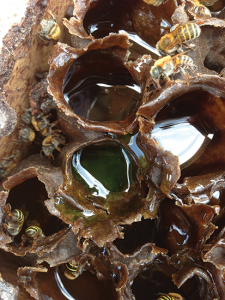 Another technique Calero incorporates into his program is using a syringe to extract honey from hives. This extraction method produces a much cleaner honey compared to traditional harvesting techniques. The syringe allows honey to be taken from the hive without mixing with wax, pollen and clay, which results in a honey that is less acidic and clearer in color. 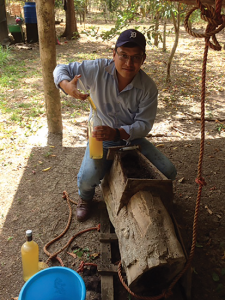 Extracting honey with a syringe . . . 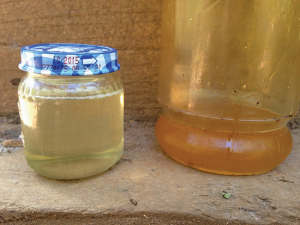 Using what he has learned during his time with Paso Pacifico, Calero has now presented twice at the Mesoamerican Congress on Native Bees, once in Chiapas, Mexico, and once in Antigua, Guatemala, including findings from the over 1,400 specimen records of 70 types of native bees that have been documented during his travels. His presentations also focus on the relationships of interdependence these native bees have with the region’s flowering plants and crops. In Nicaragua, native bees help pollinate a long list of crops including squash, coconut, coffee, avocado, guava, chayote, annatto, tomatoes, and passionfruit.

“When I first got involved with Paso Pacifico’s native bee program, I was already familiar with the important roles that bees play in the environment, but I had no idea how many different types of bees we had in the region,” said Calero. “I consider myself a leader in meliponiculture (beekeeping with stingless bees) in the Paso del Istmo, and this is something that I’ve achieved through the knowledge I’ve attained with Paso Pacifico.”

This important work with native bees is now being incorporated into a number of Paso Pacifico’s initiatives, including their Junior Ranger program and their Million Trees by 2020 campaign.

The Junior Ranger program was launched in 2012, and impacts approximately 100 children between the ages of eight and thirteen each year. This popular afterschool and weekend program combines classroom instruction, experiential field trips, and community service projects to teach principles of biology, ecology, and environmental citizenship. Students learn about and come face to face with sea turtles, endangered monkeys, and other natural inhabitants of Nicaragua. In 2017, a five-part educational module on native stingless bees was introduced into the curriculum, giving children an opportunity to engage in hands-on, interactive activities and learn about pollination, conservation, and other aspects of responsible beekeeping. Junior Rangers then share what they learn with family and friends, helping to spread the word about environmental conservation in their communities.

“The kids showed interest in everything I explained, but they especially lit up when they got to look at bee specimens with magnifying glasses,” Calero reported after first working with the Junior Rangers.

Paso Pacifico’s Million Trees by 2020 campaign is a major fundraising initiative that was launched on Earth Day earlier this year. The purpose of the campaign is to raise $10 million by the end of 2020 to plant, manage, and protect 1 million native trees in Nicaragua to help combat the harmful effects of climate change. While many reforestation projects plant tree species based on price and availability, Paso Pacifico’s program will plant a diversity of native trees that will also provide a source of food for villagers and improve habitats for wildlife, including local populations of bees that pollinate flowers found in Nicaraguan forests.

“Even though we have developed a wide variety of conservation projects, everything we do is connected and intentional,” said Paso Pacifico Founder and Executive Director Dr. Sarah Otterstrom. “Our native bee project is a perfect example of that ecosystem at work, as both the bees and the native flora in Nicaraguan forests rely on each other for survival. Our goal is to implement initiatives that will help all inhabitants of Mesoamerica’s Pacific Slope thrive, including both human and wildlife communities.”

The mission of Paso Pacifico is to restore and protect the Pacific Slope ecosystems of Mesoamerica. These habitats include the endangered dry tropical forest, mangrove wetlands, and eastern Pacific coral reefs. By working with local communities, landowners, and partner organizations, Paso Pacifico restores and protects the habitats that form building blocks for wildlife corridors. Paso Pacifico also lends its expertise to help migratory wildlife on the Central Coast of California, including threatened migratory birds and whales that overwinter in Mesoamerica. Through its high-impact programs, Paso Pacifico has established itself as one of the world’s leading biodiversity conservation organizations.