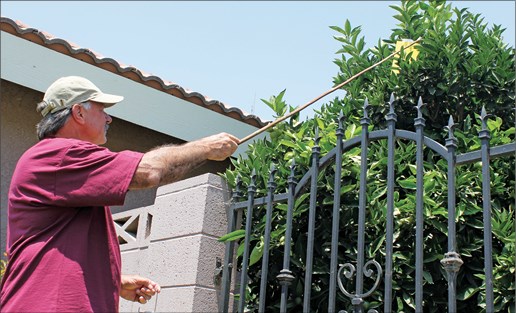 The number of citrus trees found infected with the fatal plant disease huanglongbing continues to rise in Southern California—but in the state’s prime citrus-production area, fewer potentially disease-spreading insects are being trapped.

Pest experts offer a number of possible reasons fewer Asian citrus psyllids have been identified in the sticky yellow traps set throughout the San Joaquin Valley to monitor populations.

Nick Condos of the California Department of Food and Agriculture said strict rules now in place for moving bulk citrus might be playing a part in the lower numbers. Jim Gorden, chairman of the California Citrus Pest and Disease Prevention Committee, said time of the year could also be a factor.

Condos, Gorden and Beth Grafton-Cardwell, director of the University of California Lindcove Research Station, all stressed that despite the current low numbers, the psyllid still poses a serious threat to California citrus production.

The only current defense against HLB is to control the psyllid, citrus organization leaders assert, noting that the organizations and UC researchers continue work on biological control and early detection of the disease.

HLB has caused widespread losses of citrus acreage in Florida, but has not been found in commercial citrus production in California. It was first detected in Los Angeles County in 2012. Asian citrus psyllids were found in California in 2008 and have infested seven southern counties.

Thousands of the yellow sticky traps have been placed in citrus trees to detect the psyllid. Victoria Hornbaker, who manages the Citrus Pest and Disease Prevention Program at CDFA, said no psyllids trapped outside Southern California counties have tested positive for the HLB bacterium.

Condos said a total of 592 residential citrus trees in Southern California have tested positive for HLB. With high psyllid numbers in many parts of Orange, Los Angeles, Riverside and San Bernardino counties, he said officials expect more infected trees to be found.

In Orange County, the current hot spots for HLB-infected trees are the Anaheim and Garden Grove areas, Condos said. On May 24, CDFA expanded the Orange County quarantine boundary to restrict movement of citrus fruit or plant material from additional sites.

A couple of different strains of HLB have also been identified in infected trees. Genetic analysis of the bacteria showed HLB strains found in residential citrus growing in Hacienda Heights differed from infected trees growing in the San Gabriel area. The difference could be a genetic mutation or a separate introduction of infected plant material, Condos said.

The state has been removing residential citrus trees that test positive for HLB, and was treating psyllid-infested residential areas with pesticide applications, until halted by a court injunction. An appeals court lifted the injunction last week. Condos said a California Environmental Quality Act exemption allowed the state to continue treating an 800-meter area surrounding any citrus tree identified as HLB-positive.

Gorden said the number of psyllids trapped in citrus groves, packinghouses and along travel routes in Tulare and Kern counties has been very low since the beginning of the year.

The Tulare County agricultural commissioner’s office reports a total of five psyllids trapped since January. Last year, 32 were counted in traps, down considerably from 2016 when 322 were trapped. The first population was found in 2013 in Dinuba, where 212 psyllids were identified.

In order to move bulk citrus from a regional psyllid quarantine zone or an HLB quarantine area, a set of rules must be followed. They include complete coverage while in transit and delivery only to a program-approved packinghouse or processor. Depending on the origin of the shipment and its destination, a preharvest treatment or field cleaning is required.

Since active enforcement of the tarping rule by county agricultural inspectors, Gorden said, compliance has been good. This measure, he said, may be slowing the psyllids’ spread—or at least halting their distribution along travel routes.

Citrus fruit inside quarantine areas and destined for Central Valley packinghouses must be treated prior to harvest. Grafton-Cardwell said anyone moving fruit, equipment or crews between citrus-growing regions should take precautions against psyllid movement.

Grower assessments and both state and federal funding are being invested to control psyllid populations, for detection and removal of HLB-infected trees and for urban outreach to make residents aware of the impact the pest and disease can have on citrus production.