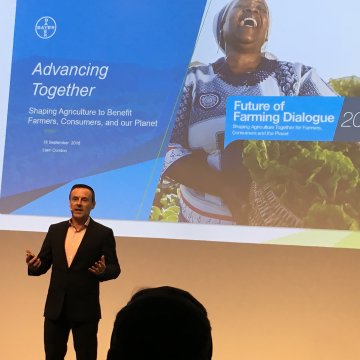 Bayer started integrating Monsanto roughly a month ago after buying it earlier this year.

So what’s happened so far? Bayer CropScience executives discussed some of the plans they have at this week’s Future of Farming Dialogue meeting at its Monheim, Germany headquarters.

Bob Reiter, who heads research and development for Bayer Crop Science, says the two companies working together should speed up the time to market for agricultural products. Normally, Bayer would spent 12 to 14 years developing and commercializing a new herbicide.

Simultaneously, Monsanto would be working on a biotech (seed) solution to develop a herbicide-tolerant crop that allows a certain chemistry to be applied to it. “That would add 10 years to an innovation life cycle,” Reiter says.

Joining forces will help speed a product to market faster, as both technologies could be developed on a parallel track.

“It could literally allow us to simultaneously launch the crop protection product at very same time as the seed product,” Reiter says.

* Digital agriculture loomed large in Bayer’s decision to buy Monsanto. The knock against digital farming is a resulting “paralysis analysis” in that it generates reams of data with little guidance in how to use it. A tool unveiled last month by The Climate Corporation may change that. The Seed Advisor uses an algorithm that takes the farmer’s data and uses it to help him or her select hybrids on that basis.

Results in 2016 were promising, says Mike Stern, who heads The Climate Corporation and Digital Farming for Bayer.

“We placed the right hybrids in the fields and won 80% of the time (vs. those not selected by using the Seed Advisor),” says Stern. “Every year with more data, the algorithm gets better.”

”It makes tremendous sense to invest in food security in a sustainable manner,” says Condon. “Bayer is a business. But we are a business that can make science for a better life. Everybody in this company wants to contribute to a better way of life, and the way we do it through science and innovation.”

You won’t find many deniers of climate change at Bayer Crop Science.

“What if the planet keeps getting warmer and warmer, as every scientist says will happen?” asks Condon. “What does that mean for the future of water (for crop production) going forward? In Germany, we’ve seen a hot summer have an impact in (crop) fields. People will say, ‘Well, it is just one year.’”

Or not. Warmer summers over time may instead signal a changing climate in a region.

“This will put incredible pressure on plants,” says Condon. That’s why Bayer is working on solutions for crops to withstand stressors like drought and excessive heat, he says.

Last March, Bayer formed a joint venture with a Boston firm called Gingko Bioworks to form a new venture called Joyn Bio. Condon says the new firm uses synthetic biology to engineer microbes that benefit crop growth. So far, the microbes Joyn Bio is keying on aim at improving nitrogen (N) fixation to reduce the amount of commercial N applications. If products like these come to fruition, it will be a disruptive agricultural technology, says Condon.

Bayer Crop Science and a new start-up called Pairwise formed a joint gene editing collaboration earlier this year. It will use tools like CRSPR-Cas9 to produce new gene-edited crop products.

“This is technology I believe that in the long run will fundamentally reshape plant breeding,” says Reiter.

It is collaborating with a German company called Targenomix that identifies the mode of action of bioactive small molecules. The firm uses various genomic tools to better understand how various molecules affect plants. The hope is it will discover new modes of action in products like corn and soybean herbicides, say Bayer executives. The last mode of action in corn and soybean herbicides to be discovered were the HPPD inhibitors (Callisto, Balance Flexx) in the 1980s.