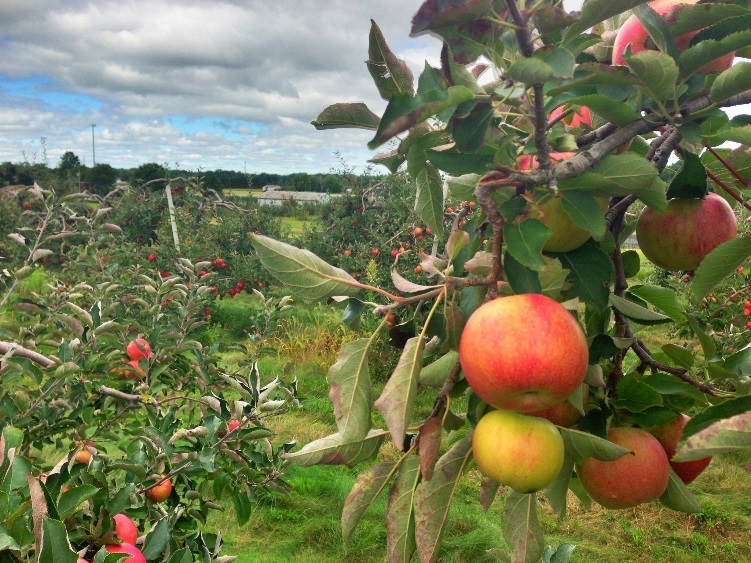 In turn, apple production suffers when fewer, more closely-related species of bees pollinate an orchard. Production improves in orchards surrounded by natural habitats, which then draw a broader selection of species to apple blossoms.

The research, published in the journal Science, examined 10 years of data from 27 New York state apple orchards. It took into account the types of landscapes surrounding these orchards, measured apple production and surveyed the species of bees that visited each orchard.

The researchers also reconstructed the evolutionary history and relatedness of New York native bee species to better understand species patterns that played out across these orchard bee communities.

This reconstruction is represented by a branching tree-like diagram of related species, called a phylogeny.

Species of bees exhibit different behaviors in how and when they pollinate flowers. Some species approach from the side, others from the top, and they each may feed at different times of day and with varied frequencies, all of which affect how completely an apple flower is pollinated.

Organs in apple flowers must receive a certain number of pollen grains to develop a full complement of seeds. When seeds do well, the tissue that supports those seeds, the fleshy part of the fruit, is also more fully developed.

“If only half of the seeds mature fully, then the fruit is misshapen,” which in turn affects weight and salability, Grab says.

In this way, habitats that surround farms affect the diversity of bee communities and, thus, an orchard’s productivity.