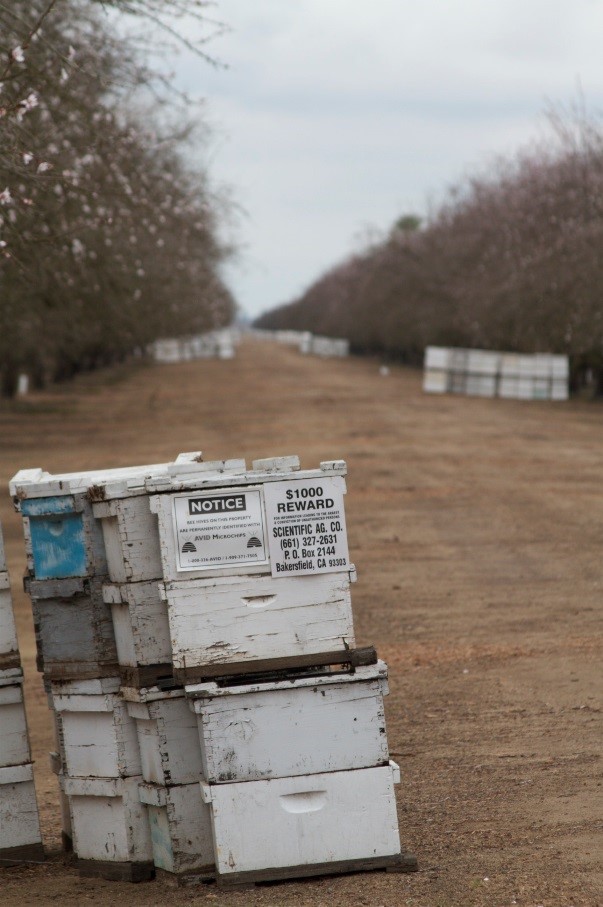 The federation’s Ag Alert magazine reports Tulare County beekeeper Steve Godlin of Visalia learned that about 100 honeybee colonies he was managing for a beekeeper from North Dakota. had disappeared from an almond orchard west of Visalia.

“It’s a nightmare,” Godlin says. “It’s very discouraging, obviously, to get the bees this far to a payday and then have them stolen.”
Deputies from the Tulare County Sheriff’s Department Agricultural Crimes Unit also took a report of a likely related theft the next day – only a few miles from the Godlin location, Gunter Honey reported the theft of 96 hives.

Almond pollination this year requires about 2.14 million apiaries for more than one million bearing acres of almonds.

“Know your beekeepers,” he says. “If you or anybody in the public sees somebody loading bees up in an almond orchard, call the police. That’s not the way it works. Bees should be going into the almonds, not out.”

Butte County Sheriff’s Deputy Rowdy Freeman, who investigates rural and agricultural crimes, tells Ag Alert the theft of 100 or 200 hives at a time would likely be committed by someone who is a beekeeper.

“They know what they are doing,” Freeman says. “They have beekeeping equipment. They know how to go in and take them and have the means to do it.

“It could be a beekeeper who lost a lot of hives and can’t fulfill his contract. Desperation leads to theft, so they will steal the hives from someone.”
Freeman says other bee thefts had been reported in Kern County and in Southern California, with 300 hives lost.

“What we typically see is they steal hives from one area and then drive several hours to put them on a contract, because the people there won’t necessarily know that they are stolen,” Freeman says.

“Almond growers need to know whose bees are going into their orchards, what markings are going to be on those hives, and if they see anything different, they need to report it.”

Freeman earlier investigated reports of a small number of bees stolen from Butte and Glenn counties and recovered about half of the bees, after deputies spotted some of the stolen hives loaded onto a small utility trailer parked in a driveway.

Two adults were arrested charged with felony possession of stolen property and the recovered bees were returned to the beekeeper-owner.

The sheriff’s department said the suspects planned to place the hives in an almond orchard in exchange for payment for pollination services.

Freeman says smaller apiary thefts could be carried out by people who aren’t beekeepers, but are just looking to make quick cash.

“In a recent case I worked, they saw an ad on Craigslist, and they responded to that and came to an agreement,” he says.

“The farmer doesn’t know who they are really dealing with, and that guy comes out and drops off a bunch of boxes that look like beehives and the farmer is happy he has bees. But he doesn’t look inside of them. One case, there weren’t any bees in the boxes, and they weren’t beekeepers.”

Freeman says the thefts this season are likely related to a limited supply of bees.

Mel Machado, director of member relations for the Blue Diamond Growers cooperative, tells Ag Alert he hasn’t heard any issues related to a shortage of bees.

Almond grower Dave Phippen of Travaille and Phippen Inc. in Manteca says he expects the cost of pollination services this year will be approximately $190 a colony.

Beekeepers should place bees out of sight and off the road, and mark hives, lids and frames with identifying information so that recovered bees can be traced back to the owner.

Growers paying for pollination services should verify that colonies in the orchard or field match with the contract they have with the beekeeper.

Though it is not cost-effective for every hive, beekeepers should strategically place GPS trackers in certain hives.

Beekeepers and farmers should maintain a close working relationship.

The California State Beekeepers Association offers up to $10,000 for information that leads to the arrest and conviction of persons responsible for stealing bees and/or beekeeping equipment.