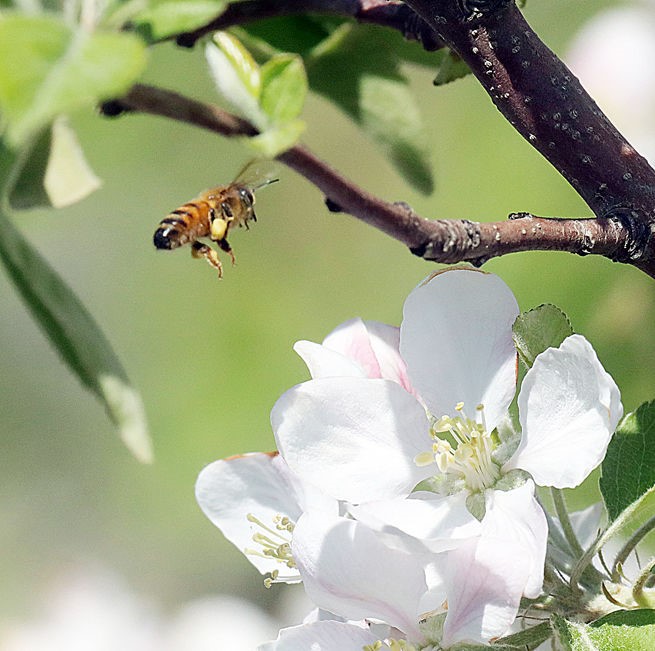 The buzzing sound is enough to make Joette Reidy smile.

“It’s so cool,” she remarked, standing just a few feet away from a bee hive that had been placed just days earlier at the end of a row of apple trees in full bloom. “You can hear them working, working, working.”

That single hive was one of 100 brought in earlier this month by Happy Apples, which makes caramel-coated apples at a warehouse off of Highway 47 and has three apples orchards in Warren County near Marthasville, to pollinate some 170 acres of apple trees.

With 60,000 bees per hive, that equals 6 million bees. It’s about the same number Happy Apples has been bringing in for years, said Dan Baker, orchard manager, but this was the first time anyone stopped to do about the math, and it sort of made them appreciate the beauty of the nature involved even more.

The bees, which are rented from Greg Hengst out of Cape Girardeau, were only here for a couple of weeks. They arrived by a flatbed trailer Tuesday night, April 7, and were packed up and moved to their next “job” Friday, April 24.

The fruit of their labor won’t be enjoyed by Happy Apples’ customers until this fall, but having a front row seat this month to all of their activity was both soothing and exhilarating, said Reidy, who owns Happy Apples with her husband, Ed. 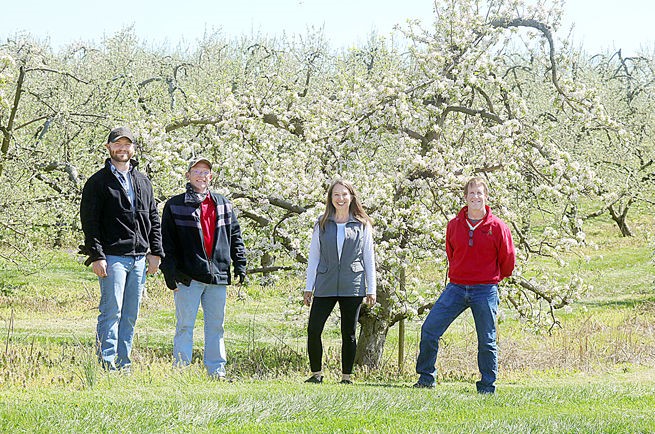 Five Varieties of Apple Trees
Happy Apples’ main orchard located off of Highway 47 near Marthasville covers about 100 acres of land, of which about 75 acres are planted with trees, said Ed Reidy.

The company has two other local orchards located closer to Concord Hill. Both have about 35 acres in trees.

The majority of Happy Apples’ 60,000 trees, about 70 percent, are the Jonathan variety, said Reidy. Another 25 percent are Gala, and the rest are Gold Delicious and Red Delicious, with one Arkansas Black, an heirloom variety that is good for making cider.

Two of the three local orchards are planted in a traditional style with the trees about 15 feet apart in rows about 20 feet from each other. The trees are around 30 to 35 years old, Reidy noted.

One of the orchards has been replanted in a high density style that looks a little like a vineyard, said Reidy, noting those trees are planted three and five feet apart in rows that are 11 to 12 feet apart.

‘We Lay Out the Hives . . . They Do Their Job’
There isn’t a specific date on the calendar when Happy Apples schedules the bees to arrive each year, said Denny Buckner, production manager.

They watch the buds on the trees, and the color lets them know when the time is right.

“The tree will bud, then push silver tip, then green, then pink,” said Buckner, noting their is a difference between first bloom and a full bloom. “That’s when we bring in the bees.”

This year was the earliest spring in the last 30 years that Happy Apples has brought in the bees, he said.
Transporting 100 hives of bees takes care and planning. The hives are stacked four to a pallet and loaded on a flatbed trailer before being covered with a tarp and strapped down, said Baker.

They arrived at the main Happy Apples orchard on the night of a full moon.

“We were here until about 1 a.m. placing the hives at all the farms,” said Baker.

After that, there wasn’t a lot of other work related to the bees required of the staff.

“We lay out hives, and they go out and do their job,” said Buckner. “As long as it’s sunny, they’ll go out and work.”

The first day the bees were at Happy Apples this year, the temperature reached 90 degrees.

“So you can imagine they were very busy,” said Baker. “Bees like the heat.”

There is no exact number of days the bees are needed each year at the orchards, but it usually takes one and a half to two weeks for them to complete pollinating all of the trees on the three orchards here, said Baker.

“It depends on the weather. If there are a lot of cloudy days, we might keep them a little longer,” he commented, noting that on cooler days, the bees get started working a little later.

Baker and Buckner only need to walk around the look at the stamens of the blooms to get a feel for if the bees have finished their work.

With 6 million bees flying around the orchards you might expect them to be highly visible, but the fact is that you really don’t see them unless you are looking, because they are hard at work, said Reidy.

Likewise, there isn’t much danger of getting stung. Baker and Buckner said they have never been stung in all their years of working at Happy Apples.

“Yeah, you respect the bees, and they respect you,” said Baker. “It’s pretty easy.”

There aren’t really any precautions to take around the bees, they said, other than being careful and taking your time when placing the hives.

Baker said he marvels at watching the bees, who are in the last phase of their short lives, as they pollinate the trees.

“It’s special that they are giving us their last best effort, and we get to enjoy the fruits of their labor, literally,” he commented, with a grin. 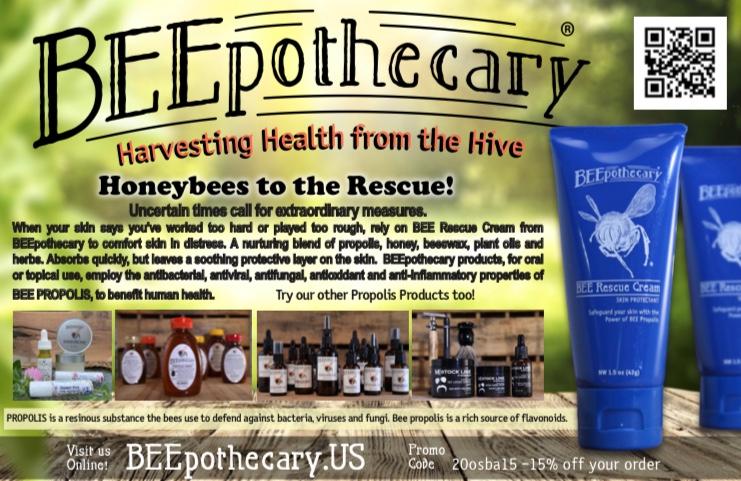