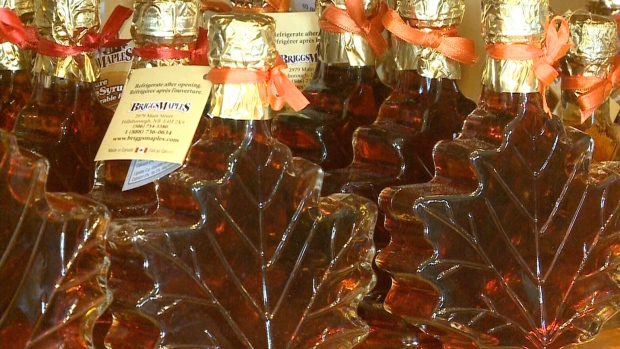 Statistics Canada says maple syrup production increased three per cent this year to a record 12.5 million gallons as taps were added in most maple-producing provinces.

Quebec produced 92 per cent of Canada’s maple syrup output, rising 2.8 per cent in the year.

The total output follows a bumper crop in 2016, which saw production increase 36.5 per cent nationally. That was on a 38.3 per cent growth in Quebec due to favourable weather conditions that resulted in higher yields.

Canadian maple production has increased from a low of 5.12 million gallons in 2008.

The total value of maple products increased two per cent to $493.7 million due to increased production. However, the price of syrup decreased on the year as more syrup in New Brunswick and Ontario went to the lower-priced processing market.

Meanwhile, the value of honey produced in Canada increased 11.1 per cent to $169.3 million on higher prices even though production was down 2.6 per cent due to poor weather conditions in Eastern Canada.

Production on the Prairies increased 1.1 per cent to 79.1 million pounds. However, production was down almost 50 per cent in Ontario and 5.1 per cent in the Maritimes.

African Honey Bees & Climate Change By: Ed Edwin Pandora, of classical Greek mythology, was given a box which contained all the evils of…