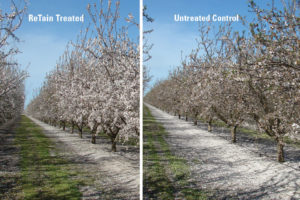 California growers enjoyed some welcome rain this past winter, but because it had been two full decades since such a super soaker, many growers were caught off guard. Clinton Bowman, a Pest Control Adviser (PCA) with Salida Ag Chem, says the chief lesson learned is that you don’t get as many opportunities to get in and spray pesticides and other crop inputs as you could in previous years.

“Growers really had limited abilities – because the windows of opportunity were so small – to get in and apply fungicides as ideally as what we’d like to,” he says. “Some blocks we had to fly in with aerial applications because the soils in the fields were so wet, we didn’t feel comfortable dragging ground rigs through.”

Keep an Eye on Soil Conditions
It’s not just the fear of getting some very pricey machinery stuck, either. Those machines are also quite heavy, and with the ground wet, growers risked compacting soils. If soils get too compacted, Bowman, who also farms almonds, says yields are going to suffer.

“You have to maintain soil conditions to promote water infiltration,” he says. “That starts when you develop a new orchard, but even after planting, anything you can do to promote infiltration is necessary.”

That means making as few passes through the orchard, especially when the soil is wet, as possible. Proactively, growers should strongly consider maintaining a native cover crop, says Bowman.

“Growers should consider having a native cover crop in the middle because it opens up the soil and provides a more stable environment,” he says. “If you’re planting, triticale does a nice job. Just allowing a strip of vegetation out there can really be a big help.”

If growers see compaction problems, however, they should take more vigorous action. Ironically, it’s easier to see problem areas prior to the rainy season because those are the areas growers see irrigation water ponding, says Bowman. He recommends chiseling or even deep ripping where possible, as well as adding gypsum.

Focus on Crop Set
Once the soil is squared away, growers should focus on bloom, because that is largely when yield is determined. Good quality, strong beehives are even more important in a wet winter, as many growers learned the hard way last winter.

“Shorter pollination windows mean you must have more bees,” he says.

In the interest of squeezing out maximum yields, Bowman has been trialing a plant growth regulator (PGR) from Valent called ReTain that appears extremely promising. It’s not a new product, having been registered for more than a decade in pome and stone fruit, but in recent years scientists have learned the ethylene inhibitor extends the viability and delays the senescence of almond blossoms, increasing pollination potential.

“In trials, we’re seeing increases in production, especially in years of short opportunities for pollination, like wet years,” he says. “We’re still in the learning phase with that product. It’s a large investment into your crop, but it seems to have a lot of potential.”

Tino Lopez, a Valent Field Market Development Specialist, says the trials do show increased yields, but growers obviously have to be able to get in and spray. That was a problem last year, and could be again this year if there’s another wet winter.

But the good news is they did a few trials last year featuring aerial applications, and yields were if anything even greater than the ground applications of ReTain.

“We hope to get an air label (for this winter), and anticipate having it in time for this coming season,” he says. “Aerial applications are more effective because of the timing, as you can hit the sweet spot – 30% to 60% bloom more easily.”

ReTain, the first PGR developed for almonds, has eight-hour rain fastness, so growers need to apply when they have a window of eight hours with no significant rain, says Lopez. After eight hours, more than 90% will be absorbed.

“It’s an expensive product so you don’t want to put on and watch it wash off,” he says. “Growers who want to see the maximum possible yields need to make sure they get the full impact.”