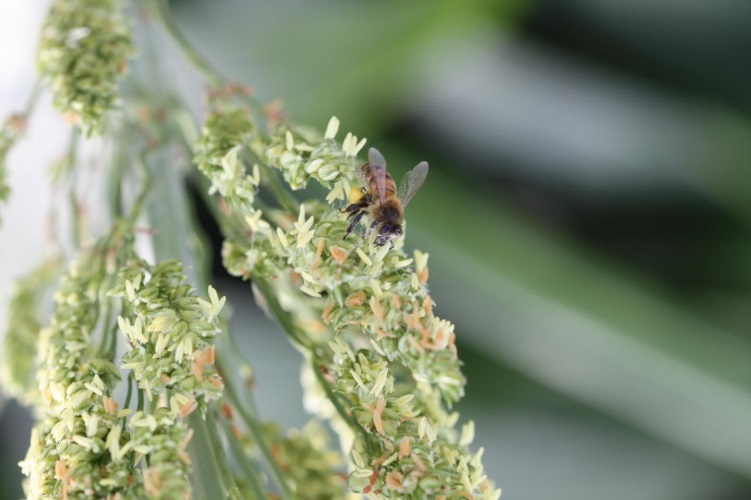 The University of Tennessee says research shows a positive correlation between bee health and the presence of agriculture – just opposite to popular belief.

Scientists at the university’s Institute of Agriculture say the overall health of honey bee hives actually improves in the presence of agricultural production.

The study, published in the Journal of Economic Entomology, evaluated the impacts of row-crop agriculture, including the traditional use of pesticides, on honey bee health.

“We’re not saying that pesticides are not a factor in honeybee health,” says lead author Mohamed Alburaki, post-doctoral fellow with the university’s Department of Entomology and Plant Pathology. “There were a few events during the season where insecticide applications caused the death of some foraging bees.

“However, our study suggests that the benefits of better nutrition sources and nectar yields found in agricultural areas outweigh the risks of exposure to agricultural pesticides.”

During the course of a year, colonies were monitored for performance and productivity by measuring colony weight, brood production and colony thermoregulation, the ability to maintain an optimal temperature within a hive. It’s an important factor in brood development and the health of the resulting adult bees.

The study found hives located in areas with high to moderate agricultural vegetation grew faster and larger than those in low or non-agricultural areas. Researchers suggest the greater population sizes enabled better colony thermoregulation in these hives, as well.

Disruptions and fluctuations in brood rearing were also more notable in a non-agricultural environment. Brood production was highest in the location that exhibited a more evenly distributed mix of agricultural production, forests and urban activity.

“One possible explanation for this finding could be the elevated urban activity in this location,” Alburaki says. “Ornamental plantings around homes or businesses, or backyard gardens are examples of urban activity that increase the diversity of pollen in an area. Greater pollen diversity has been credited with enhancing colony development.”

Researchers evaluated trapped pollen from each colony and found low concentrations of fungicides, herbicides and insecticides. All were at levels well below the lethal dose for honey bees. Imidacloprid was the only neonicotinoid detected, also at sub-lethal levels.

Scott Stewart, integrated pest management specialist with the university’s extension program, says the study found that higher exposure to pesticides in agricultural environments did not result in measurable impacts on colony productivity.

“We train agricultural producers on careful selection and conscientious application of pesticides to reduce bee exposure,” Stewart says, “but it’s becoming more clear that the influences of Varroa mite and food availability are more important factors in honey bee health than agricultural pesticides.”