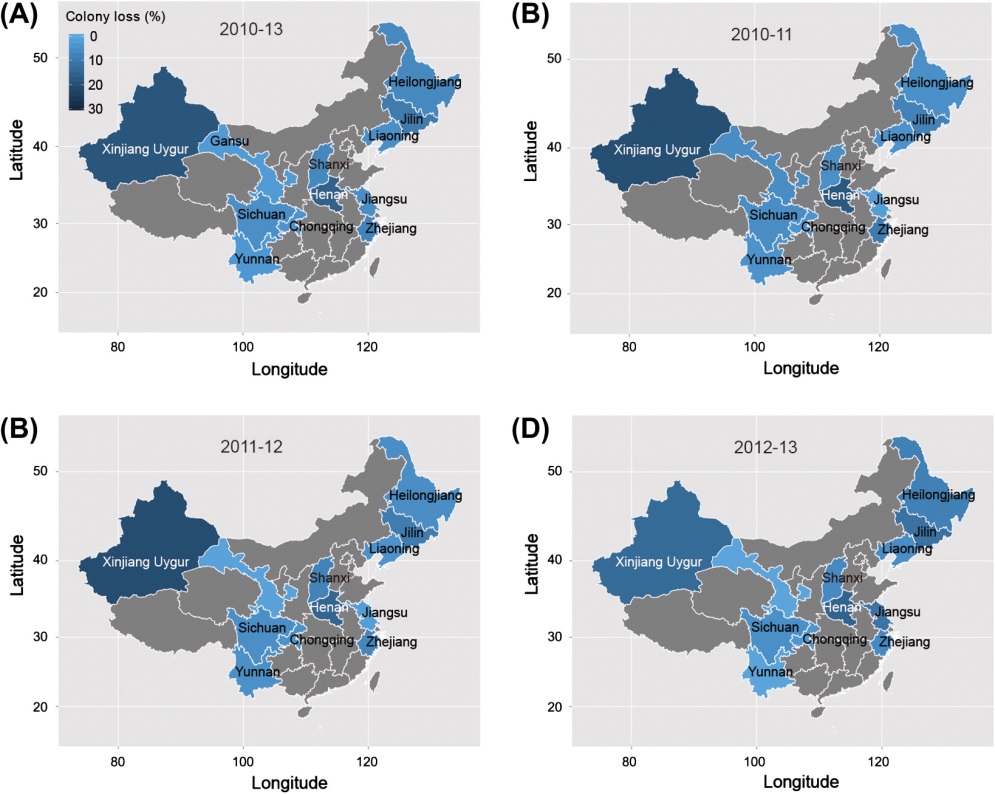 Since concern about widespread honey bee colony losses began ten years ago, there have been surveys carried out to assess winter losses in North America and many European countries. So far, the picture in China, the largest beekeeping country in the world, has been unclear. Now for the first time, information about winter losses from a large-scale survey carried out from 2010-13 has been published.

In this new paper published in the Journal of Apicultural Research, Zhiguang Liu and Wei Shi from the Institute of Apicultural Research, Chinese Academy of Agricultural Sciences, Beijing and colleagues, report on a three year survey using standard questionnaires developed by the international COLOSS Association. In total, they received 3,090 responses, including 485 from part-time beekeepers, 2,216 from sideline beekeepers, and 389 from commercial beekeepers. Between them these beekeepers managed some 140,000 colonies, that is about 2.4 % of China’s six million colonies.

The results showed that colony losses were generally low (on average 10.1%), compared to published results from Europe and the USA. There were however variations between years (ranging from 8.5 to 12.0 %), between provinces (ranging from 2.5 to 19.0%), and between different sizes of beekeeping operation (ranging from 7.6 to 12.1%).

The authors speculate that reasons for the lower losses compared to those of other countries may be due to a high genetic diversity in their honey bees, regular replacement of queen bees by the beekeepers, and because the average size of beekeeping operation is small, meaning that beekeepers can pay close attention to their hives, in particular to the way they control the parasitic varroa mite. The authors also discuss why losses may be consistently higher in certain regions.

IBRA Science Director Norman Carreck says: “For the first time we now have a good picture of honey bee colony losses in China, the world’s biggest beekeeping country. Further studies of why losses there appear to be relatively low may assist our understanding of widespread colony