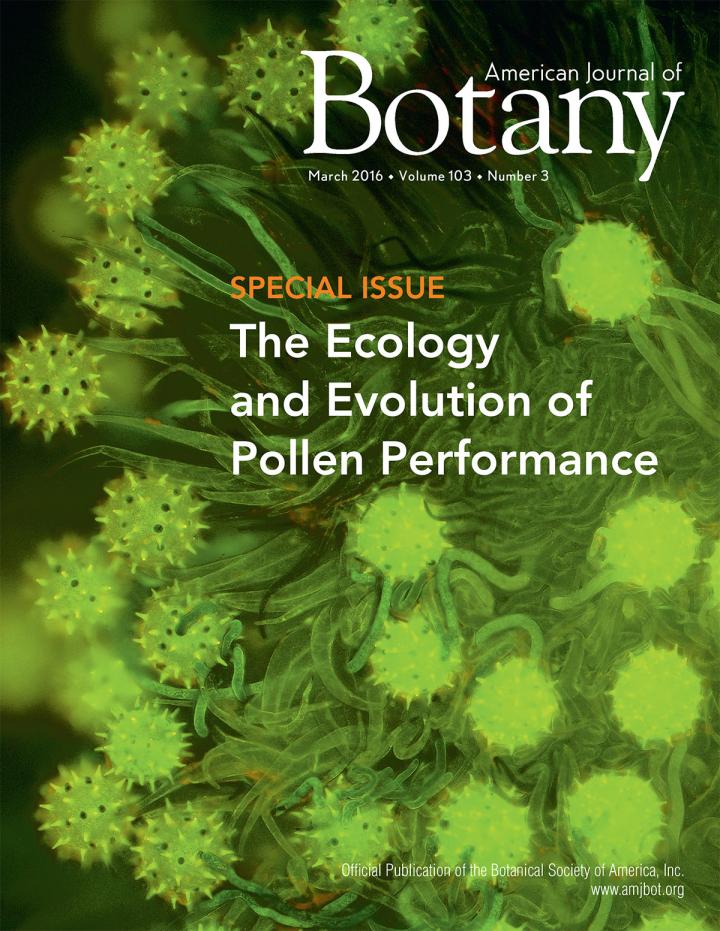 IMAGE: After pollination, pollen must hydrate, germinate, develop sperm, and grow a pollen tube to reach an ovule and egg. These performance functions are constrained to occur between stigma receptivity and… view more

Pollen grains may be small but they have a big job. Delivering a sperm to an egg is a little more complicated when the parents don’t move around. For plants, pollen success means reaching a receptive stigma, germinating and growing a pollen tube into the ovary, locating an ovule, and only then entering and delivering a sperm to a receptive egg. Despite the importance of these events to plant reproduction, pollen performance is relatively understudied.

“For my part, in trying to understand the early evolution of male gametophyte performance traits in flowering plants, I found it frustrating that so much of the research was focused on consequences for sporophyte fitness alone,” says Dr. Joe Williams, a professor at the University of Tennessee. “Where were the papers on gametophyte fitness traits?”

To address the gap, Dr. Williams, along with Dr. Susan Mazer, a professor at the University of California-Santa Barbara, organised a symposium at Botany 2014 that culminated in the recent American Journal of Botany Special Issue, “The Ecology and Evolution of Pollen Performance”. “We soon found a surprising number of labs around the world interested in pollen evolution from a functional standpoint,” said Dr. Mazer.

Although many only turn their thoughts to pollen as allergy season approaches, the Special Issue articles show that a diverse array of researchers are actively pursuing research in pollen performance. Like the more obvious competition among animal sperm, interactions between pollen grains can also drive fitness outcomes (Harder et al., 2016; Swanson et al., 2016), although it is not always simple (Swanson et al., 2016) and we may need to change the approach of how competition is manipulated to accurately study it (Pélabon et al., 2016). But success is not all up to traits of the male, since the interactions between pollen and female tissues can also explain some of the variability in pollen performance (Cruzan and Barrett, 2016; Lankinen et al., 2016; Mazer et al., 2016).

Pollen structure has long been used to classify plants, but these traits can also have function (Banks and Rudall, 2016), and a number of the papers explore these pollen traits in detail. Upon landing on a stigma, pollen needs to transition from a desiccated dominant state to a hydrated germinating grain, and this can be governed by the number of apertures (Prieu et al., 2016) and the hydrogel properties (Vieira and Feijó, 2016). Pollen size can also be important for fitness (Marshall and Evans, 2016; McCallum and Chang, 2016), but so is pollen tube growth rate (Williams et al., 2016). These examples suggest there is knowledge to be gained by zooming in on these tiny gametophytes.

The collection of papers gathers together diverse perspectives on pollen performance and lays out clear examples of how to test these ideas. Representing a broad range of taxa and approaches to studying pollen performance (Williams and Mazer, 2016), this Special Issue is likely to “ignite renewed interest in pollen performance, particularly among young researchers” according to Dr. Mazer. Dr. Williams suggests, “Surely the time is ripe for evolutionary biologists to refine their ideas based on our deeper understanding of the traits that determine gametophyte fitness.”