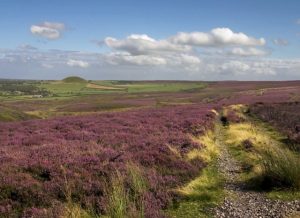 Scottish beekeepers say the honey crop was a virtual failure last summer thanks to dreich (wet, cold or gloomy) weather and this is expected to push up prices.

The Scottish Beekeepers’ Association says the honey flow was dreadful this year.

President Bron Wright tells Scottish Television if people think the price of honey is up, it is because it is becoming a rarer commodity.

“There is huge demand and it goes flying off the shelves when it is there.”

There are about 1,400 hobby beekeepers who are members of the Scottish Beekeepers Association, with an estimated 1,000 hobbyists who are not.

With fewer than 30 commercial beekeepers in the country and only a dozen of making a full-time living from selling honey, the Bee Farmers’ Association (BFA) says there is an urgent need to recruit more professional bee farmers because honey is becoming an increasingly rare commodity.

“It is a tiny number of people producing something that is very important to the shops – the heather honey is what the tourists want to buy and there are only a few of us producing it. Arguably we want to have more professional beekeepers.”

There is a waiting list for people wanting to buy bees and a colony with one queen can cost about £500.

Mellis says more financial support is needed to make it easier to access funds to start up a beekeeping business.

“You need about £50,000 to start a bee farm with 200 hives,” he says. “It is not easy and therefore if access to funding was available it could become much more viable in terms of the number of beekeepers and the number of hives.”

The BFA has an apprenticeship scheme to encourage young people to become beekeepers.

Mellis says this year’s honey yield was only 60% of the average due to a “virtual total failure” in the middle of the year, which had only been balanced out by good supplies from heather.

He says a pattern of below-average honey yields has been going on for the last six or seven years. In the previous decade to that, there were only two years that produced such a poor crop.

“It could be down to the weather, it could be farming practice,” he says. “One of the problems we have is farmers now produce silage instead of hay. “They cut the grass three or four times a year and any flowers growing in those fields just get chopped, and are no use to the bees.

“Also I think the weather patterns are distinctly colder and wetter than they were in the previous 10 years.”

A Scottish government spokesman tells STV says it has launched a bee health strategy aimed at achieving a healthy sustainable population of honey bees in Scotland.

“We value the role bee farmers play and encourage anyone who is interested in the industry to see what support they are eligible for under Scotland’s Rural Development Plan as young farmers and new entrants,” the spokesman says.