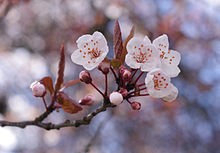 WENATCHEE, Wash. — Spray pollination may someday replace bees in orchards, withholding irrigation before cherry harvest doesn’t do much and adding hand pruning to mechanical pruning every other year boosts yields.

Precision spray pollination would negate problems such as not having enough honeybees, distribution of pollen-borne viruses and insufficient pollen distribution, Whiting said.

Pure pollen can be kept alive in a liquid state for two hours without loss of germinability, he said.

“We are pursuing this further. We are using an electrostatic sprayer for 12 to 14 gallons per acre. Electrostatic because the (flower) stigma has a negative charge,” he said.

For years, growers have debated whether withholding irrigation a week or two before harvest yields better cherries. Whiting said two years of studies led him to conclude “it’s a much ado about nothing.”

While recognizing there are many variables — including soil depth and type, genotype of the cultivar and rootstock and types of irrigation systems — Whiting set up trials withholding water from seven to 17 days before harvest and found no effect on bud density, bloom, firmness, cracking, size or quality.

The only potential benefit was a 2 percent increase in soluble solids, mostly sugar, which could be tasted but only with Lapins and not Chelans, he said. In one case, soluble solids increased 10 to 13 percent and firmness dropped about 6 percent, he said.

Mechanical pruning of planar or fruiting-wall style orchards saves labor and can save 20 percent or more in annual production costs and improve worker safety and efficiency, Whiting said.

Powered by tractors, mechanical pruners hedge the sides of trees and top them. There are more ragged cuts and only half as much wood is removed so a good plan is to remove more wood by following mechanical pruning with hand pruning every other year, he said.

Fruit weight is slightly smaller with mechanical pruning but yield is greater because more wood and more buds are left, he said.

Hand pruning cherry trees costs an estimated $741 per acre versus $168 for mechanical only and $590 for a combination, he said.