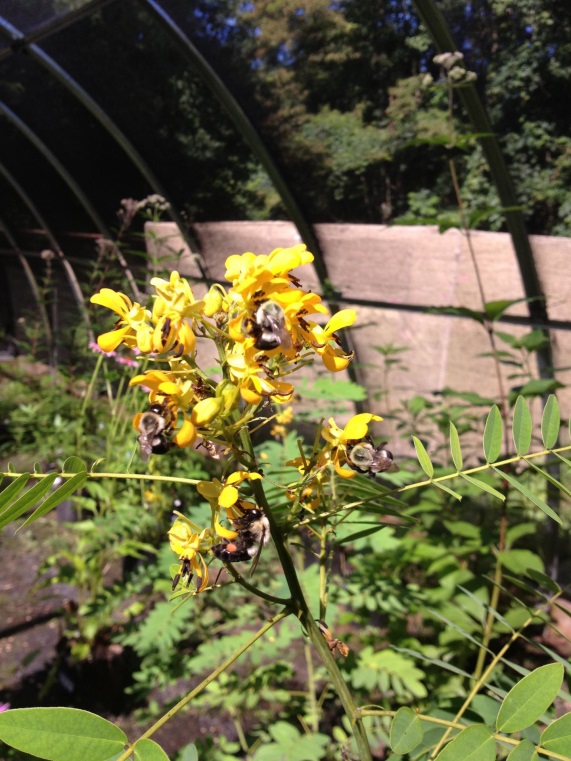 Bumble bees have discriminating palettes when it comes to their pollen meals, according to researchers at Penn State. The researchers found that bumble bees can detect the nutritional quality of pollen, and that this ability helps them selectively forage among plant species to optimize their diets.

“Populations of many bee species are in decline across the world, and poor nutrition is thought to be a major factor causing these declines,” said Christina Grozinger, director of the Center for Pollinator Research, Penn State. “Our studies can help identify plant species and stocks that provide high-quality nutrition for bumble bees and potentially other bee species, which will help in the development of pollinator-friendly gardens and planting strips.”

According to Anthony Vaudo, a graduate student in entomology who led the study, scientists previously believed that bees’ preferences for flowering plants were driven by floral traits, such as color, scent, morphology or nectar concentration.

“Here we show that bumble bees actually choose a plant for the nutritional quality of its pollen,” said Vaudo. “This is important because pollen is bees’ primary source of protein and lipids.”

The researchers observed and recorded bumble bees as they foraged for pollen among host-plant species in an outdoor arena where the bees were restricted to only those plants. They then determined the carbohydrate, protein and lipid concentrations, as well as protein-to-lipid ratios (P:L), of the pollen from all the plants within the arena. The team analyzed the relationship between the foraging rates and the nutritional quality of the pollen. They report their results in today’s (June 27) issue of the Proceedings of the National Academy of Sciences.

“We found that bumble bees preferentially visited plants with pollen that had high P:L ratios,” Vaudo said. “We did not see a direct relationship between bee visitation and pollen carbohydrate, protein or lipid concentrations.”

According to Grozinger, many studies have shown that other animal species regulate their diets to make sure they get enough — but not too much — of their key nutrients to stay healthy. “Bees likely get the majority of their carbohydrates from nectar, and then need to selectively feed on different kinds of pollen to get the right amounts of both protein and lipids,” she said.

The plants with highest visitation by bumble bees in this study included American senna, spiderwort and Culver’s root.

The scientists confirmed their finding that bumble bees prefer pollen with higher P:L ratios using a laboratory cage study in which they placed bees in cages in the absence of floral cues. Instead of flowers, they presented the bees with fresh pollen from different plants. The scientists again found that bees preferred pollen with higher P:L ratios.

Finally, to test whether the bumble bees’ preferences were due to nutritional quality and not some other chemical signal in the pollen of the different plant species, the researchers homogenized the pollen collected by honey bees into a nutritionally uniform mix. They then added protein and lipids to the pollen to create diets of different P:L ratios, and provided these to the bumble bees. The bees still preferred pollen that had the same P:L ratios as was found in the field studies.

“These nutritional ratios are likely those that most closely match the optimal nutritional needs of the bumble bees,” Vaudo said. “The bees seem to optimize their nutritional intake and do not simply try to maximize the amount of protein in their diets.”

How do bumble bees know the P:L content of pollen?

“It is likely that bumble bee workers sense the protein and lipid content of pollen with two strategies,” said Vaudo. “First, there is a chemically complex substance on the outside of pollen called the pollenkitt that includes free amino acids and fatty acids. It is likely that the bees taste pollen quality directly from the pollenkitt with chemotactile receptors on their antennae or mouthparts. Second, after the bees consume pollen, the nutrient concentrations of proteins, lipids and carbohydrates in their bodies change and can cause an increase or decrease in the sensitivity of their taste receptors for those nutrients.”

According to Vaudo, extending these methodologies to other bee species could reveal that nutritional needs and preferences of bee species explain their distribution among host-plant species as well. It could also help explain why these distributions may vary year to year and how bees associate other floral cues with rewarding and unrewarding resources.

“Our findings may guide the selection of plant-species for habitat restoration for bee conservation,” said Vaudo. “We could select the plant-species that provide the nutritional resources that bees need and prefer so that we can improve bee survival, health, reproduction and the size of bee populations.”

The North American Pollinator Protection Campaign Bee Health Improvement Project, the USDA Agriculture and Food Research Initiative National Institute of Food and Agriculture, and an anonymous donor to the Center for Pollinator Research supported this research.