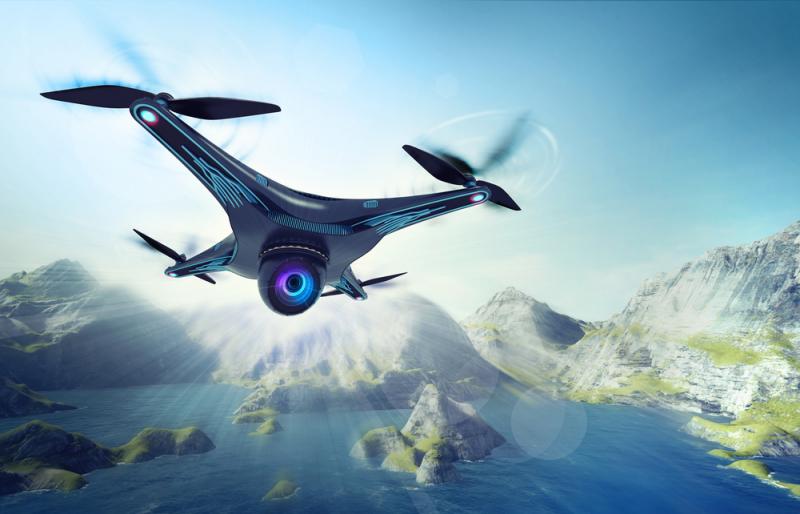 The key to designing the next generation of drones could reside in the animal kingdom.

Engineers are exploring an area of research called biomimetics, which is an interdisciplinary field combining principles of engineering, chemistry, and biology, according to Nature.

These concepts get applied to the synthesis of materials, synthetic systems, or machines that exhibit functions similar to biological processes.

Essentially, the core idea is that sustainable solutions to issues humanity is dealing with could be solved by imitating patterns and strategies found in nature.

Some applications that have emerged from this unique form of scientific study include analyzing how cicada wings can repel water leading to potentially new artificial surfaces with self-cleaning or anti-fogging abilities.

Mimicking features like a bird’s ability to safely perch on a ledge or emulating an insect’s compound eyes which can help them see a different spectrum of light than humans, could create robots that are more agile and require less maintenance when sent out on reconnaissance missions.

R&D Magazine highlighted some of the nature-based innovations being worked on at laboratories around the world.

Bats possess a number of features that engineers and scientists could find ideal for future robotics projects. The creatures are considered to have the most sophisticated powered flight mechanism within the animal kingdom, but the complex wing motions they have pose significant technological challenges for replicating them.

However, a team of researchers from the California Institute of Technology and the University of Illinois at Urbana-Champaign may have found a way around that obstacle and earlier this year introduced the ‘Bat Bot’.

This mechanical creation resembles its real-life counterpart. It weighs 93 grams and has a roughly one-foot wingspan. A custom ultra-thin silicone-based membrane was developed to simulate the malleability of normal bat wings.

According to the researchers, designing the flight mechanism involved a number of different types of joints that interlock the bones and muscles to construct a musculoskeletal system that is capable of movement in more than 40 rotational directions

The silicone-based membrane fills up with air and deforms when the robot begins flapping its wings. The membranes then snap back to their usual shape and emit air producing a huge amplification in power for the flap.

“Our work demonstrates one of the most advanced designs to date of a self-contained flapping-winged aerial robot with bat morphology that is able to perform autonomous flight,” said study co-author Alireza Ramezani, in a statement.

Perfecting this design could essentially help yield new designs where drones can have more maneuverability for flying in environments inhabited by people and other obstacles without causing damage or injury.

A fleet of experimental insect-sized drones could become either a substitute or an assistant to real honeybees as these bugs are facing a rapid decline in population, thanks to Colony Collapse Disorder

“The global pollination crisis is a critical issue for the natural environment and our lives. The need to develop an innovative pollination tool that does not require time and effort to achieve pollination with a high success rate is urgent,” wrote the team in their journal abstract.

Researchers in Japan designed these peculiar prototypes by attaching horsehair bristles to a drone the size of a power adapter, reported Business Insider. The bristles were coated with a special gel that enables them to gather pollen from flowers in the same manner as a honeybee would.

Tests inside the laboratory indicated the drones were able to pick up pollen like a natural pollinator and could release these grains successfully pollinating the plant.

The drones are not autonomous and have yet to be tested outside the lab.

Future research, however, could involve infusing a mix of artificial intelligence, GPS, and high-resolution cameras to make these machines completely autonomous, especially in tests taking place outside.

Some ambitious engineers have found other biological inspirations for their drones.

The U.S. Navy, in conjunction with a company called Boston Engineering, tested an unmanned underwater vehicle at the Joint Expeditionary Base East in Virginia Beach, Virginia back in December 2014.

The prototype, labeled Ghostswimmer, was developed as part of the Navy’s Silent NEMO project, which is an experiment exploring the possibilities of using biomimetic, unmanned underwater vehicles within the fleet.

Ghostswimmer resembles the shape and mimics the swimming style of a large fish. It weighs approximately 100 pounds and can operate in aquatic depths ranging from 10 inches to 300 feet.

The robot can operate autonomously for extended periods of time due to a long lasting battery, but users can also control the vessel through a laptop attached to a 500 foot tether.

“It swims just like a fish does by oscillating its tail fin back and forth,” said director of Boston Engineering’s Advanced Systems Group Michael Rufo, in a statement. “The unit is a combination of unmanned systems engineering and unique propulsion and control capabilities.”

The fish-like method of propulsion could reportedly make it quieter than a propeller-driven craft of the same size, according to New Atlas. A stealthy appearance could make it useful in applications like intelligence, surveillance, and reconnaissance missions. “Friendly” jobs like hull inspections could be viable since the tether is long enough to transmit information back to the laptop.

However, the fish would need to be periodically brought to the surface to download its data.

Engineers working at Stanford University’s Biomimetics & Dexterous Manipulation Laboratory have focused on the gecko’s ability to stick to certain surfaces as an inspiration for their drone development efforts.

Researchers behind this endeavor analyzed the biology of the lizard’s feet, which contain hundreds of flap-like ridges called lamellae.  Each ridge has millions of hairs called setae, which are 10 times thinner than a human’s. Further examination shows that each hair divides into smaller components called spatula that look like a bundle of split ends.

These split ends are so small that they interact within the molecules of the climbing surface, letting the gecko adhere to a variety of surfaces.

Cracking this molecular code led to the team building a robot dubbed Stickybot that resembles the gecko. It uses a dry adhesive to walk on any smooth surface in different directions.

Further development of this technology led to engineers constructing more robots that could climb walls carrying more than 100 times their weight, according to the New Scientist.

Currently, researchers from Stanford University and NASA’s Jet Propulsion Laboratory are working on infusing this gecko-inspired adhesive into robotic grippers that could clean up space debris.

Share to TumblrShare to FacebookShare to TwitterShare to PrintShare to More

By: Jaren Kerr, Staff Reporter A method that’s supposed to make beekeeping simpler for novices by providing honey on tap has drawn criticism from…