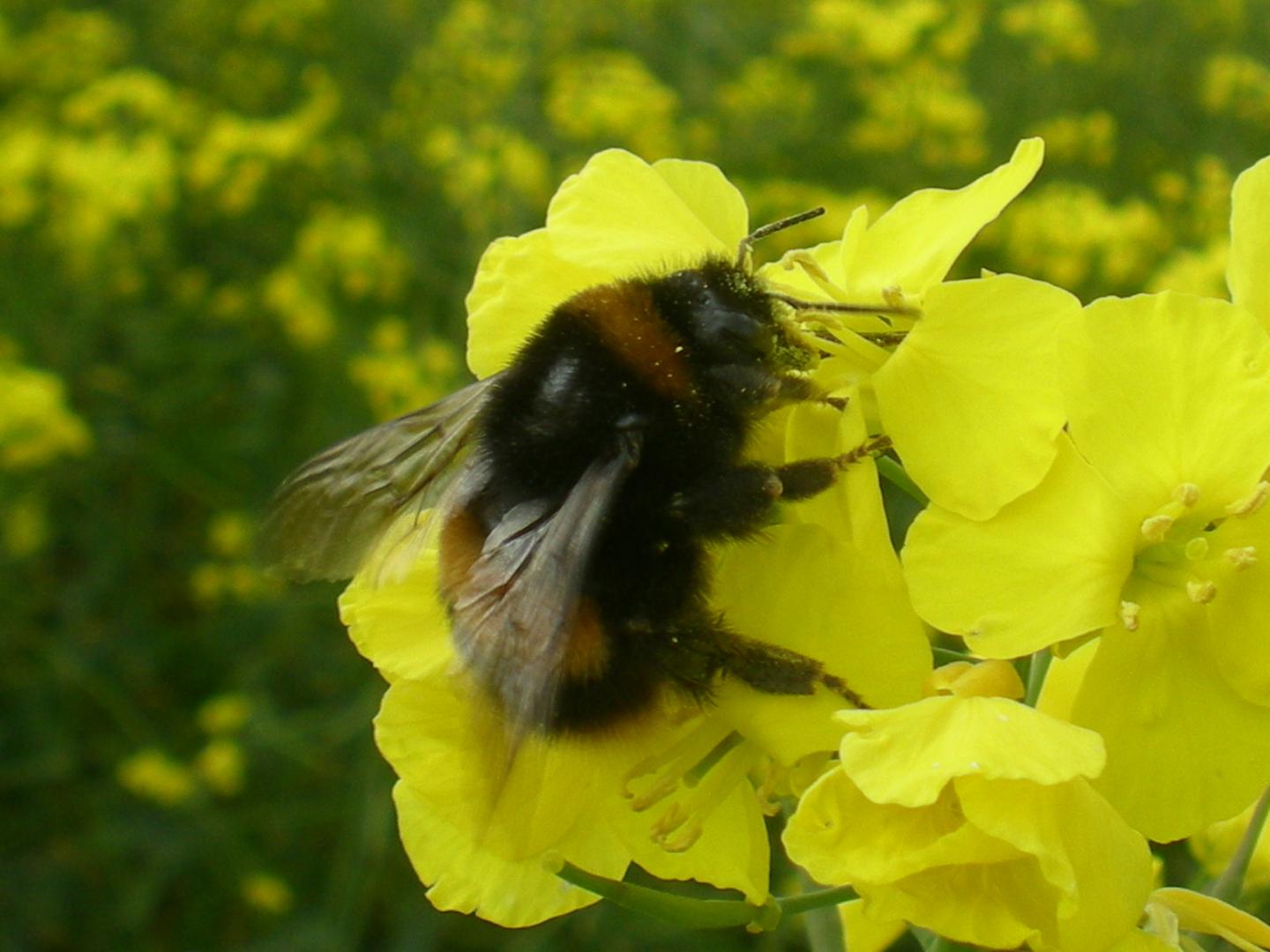 IMAGE: This is a Bombus terrestris foraging on oil seed rape.

The study is the first to link exposure to thiamethoxam — one of the most commonly used neonicotinoid pesticides — to fewer fully developed eggs in queens from four wild bumblebee species that forage in farmland.

“Queen bees will only lay eggs when the eggs are fully developed,” said Prof. Nigel Raine, holder of the Rebanks Family Chair in Pollinator Conservation.

If queens need to use energy to clear pesticides from their system instead of investing in eggs, then fewer fully developed eggs will result, he said.

“This will likely translate into slower egg-laying rates, which will then impede colony development and growth.”

Published in the journal Proceedings of the Royal Society B, the study was conducted by Raine, along with Mark Brown and Gemma Baron from Royal Holloway University of London.

Neonicotinoids are one of a number of factors contributing to the decline of bees and are currently being phased out or restricted in several countries including Canada.

The researchers examined the impacts of exposing queen bumblebees to thiamethoxam during the spring when they emerge from hibernation and are preparing to lay their first eggs and establish a colony.

“Given the vital role spring queens have in maintaining bumblebee populations, we decided to focus on assessing the impacts at this stage in the life cycle,” said Raine, a professor in the School of Environmental Sciences. “These spring queens represent the next generation of bumblebee colonies.”

Worker bees from those first eggs are needed to clean and guard the nest, find food and tend to the next batch of eggs. Without those workers, the colony will likely fail, said Raine.

In this study, about 500 queen bees from four species were caught in early spring and for two weeks were fed syrup treated with pesticide doses similar to levels found in pollen and nectar in the wild. They were then observed for another two weeks before they were frozen, dissected and examined.

The researchers found that across all four species the queen bees that were given higher doses of thiamethoxam had smaller, less-developed eggs than the queens not exposed to the pesticide.

Raine suspects the metabolic costs associated with the detoxification required from pesticide exposure results in a reduced amount of nutrients available for other biological processes such as egg development.

The researchers also found queen bees from two of the four species ate less nectar after being exposed to thiamethoxam.

“If their feeding rates drop off, the queens go into a dormant state,” said Raine. “They won’t have enough energy to fly or to collect pollen to feed their larvae. They may not even have enough resources to lay eggs.”

The fact that queen feeding behavior was impacted by exposure to thiamethoxam in only two of the four bee species highlights the reality that sensitivity to pesticides differs among bee species, added Raine.

“Most of the work to determine levels of toxic exposure to pesticide has used honeybees as a model pollinator. But our findings show that bee species vary in their level of sensitivity to pesticides, which is important information that should be factored into regulatory decisions on these chemicals.”

By Jessica Louque Granite City Produce – Jessie Thomas As a hobby beekeeper, one of the bee goals is to be able to sell…