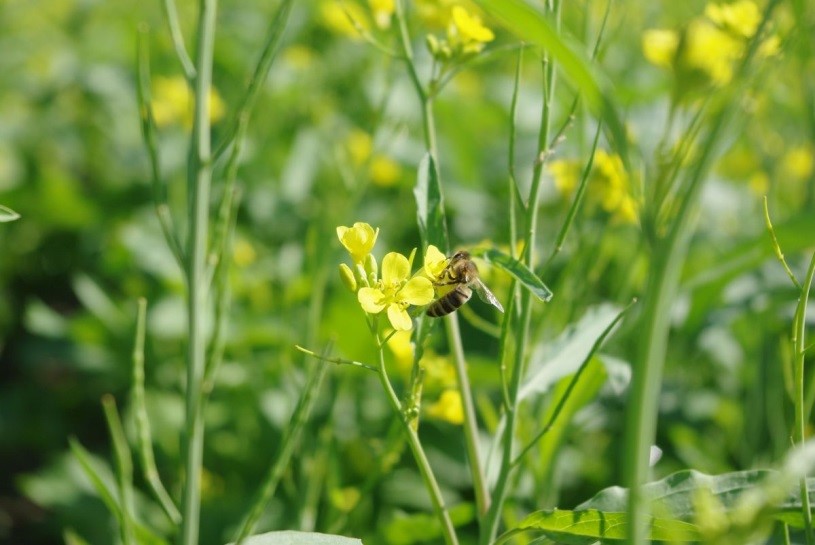 The aim of the project is to ensure pollinators, such a honey bees, receive a steady supply of food resources, which will in turn support crop yields

A cooperative of 18 mustard farmers have joined forces to embark on the UK’s biggest ever project to protect and eventually boost pollinator populations.

The English Mustard Growers (EMG), a farm collective based in Cambridgeshire, Lincolnshire and Norfolk which supply seed to the Colman’s English Mustard brand, are working in partnership with crop production specialists, Hutchinsons, to map the availability of nectar and pollen throughout the year.

The aim of the project is to ensure pollinators, such a honey bees, receive a steady supply of food resources, which will in turn support crop yields.

The ten year project, which began in 2014, is the biggest of its kind in the UK, covering a total of 10,000 hectares of land, and is fully supported by the British Beekeepers Association.

Now two years into the project, the EMG have been busy growing a variety of plant species, including bulbs, shrubs, hedges and wild flowers across their farmland, to ensure pollinators have enough nectar and pollen supply before hibernation at the end of autumn.

Autumn and spring months are crucial for the survival of honey bees as this is when nectar and pollen supply is at its lowest.

In a bid to enhance nectar and pollen supply, the farmers participating in the project have planted a total of 21,000 flowering bulbs within their hedgerows, ditches and field margins.

One of the participating farms has also planted over 500 native hedge species and plans to grow over 200 shrubs a year to re-generate the surrounding woodland.

This comes after survey results revealed the importance of hedges and shrubs to nectar and pollen supply as well as being safe places for bees to breed and escape predators.

Over the autumn period, participating farms intend to grow over 13 hectares of flower rich margins and 3.5 hectares of pollen and nectar mix plants which will provide bees will a supply of food throughout next spring and summer.

The project has also importantly inspired farmers to work collectively to connect their land to create extensive wildlife corridors.

To date, a total of 85 kilometers of hedgerows and just over 380 kilometers of grass margins, in which many of the new plant varieties are being grown, have been established. This is the equivalent distance of over two laps on the M25.

The longer term ambition of the project is to help protect pollinator populations and boost the broader biodiversity within the region.

Michael Sly, Chairman of the English Mustard Growers explains: “One of our mustard varieties, White Mustard (Gedney), depends entirely on pollinators, such as bees, for its pollination during flowering time.

“This, coupled with the significant role bees play in our wider ecosystem, makes this a particularly important area for us to support.”

Delving further into the science behind the project, each of the participating farms underwent a detailed survey in which a botanist calculated the total amount of pollen and nectar available in crops, hedgerows, woodland and field margins.

The data was then used to estimate the amount of pollen and nectar produced by different types of plant species on a month by month basis.

Mike Hutchinson, director of Hutchinsons crop production specialists, who conducted and analysed the initial survey, said: “By mapping the availability of pollen and nectar on individual farms on a monthly basis, each farmer can identify where the availability gaps are – usually during early spring and late autumn – and can take measures to enhance supply during these times.

“Solutions can include changing cutting regimes on grass and flower margins or building diversity into crop production.

“The aspect which makes this project effective and unique is its scale and ability to monitor nectar and pollen supplies on a month-by-month basis.”

The collaborative project is an example of how agricultural suppliers, expert advisors and farmers can work together to benefit biodiversity and secure the continuous supply of vital crops.