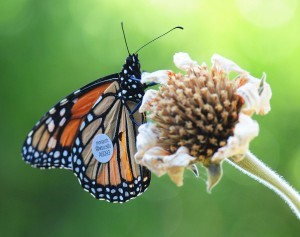 PROSSER, Wash. – When a butterfly dines in a homeowner’s garden, that’s not unusual. But when some internal compass guides that winged visitor into the yard of Kathy Keatley Garvey in northern California, it’s downright remarkable. 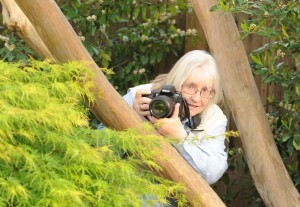 “‘What are the odds? What are the odds?’ kept going through my mind. I was totally amazed to see it,” recalled Keatley Garvey of the recent afternoon she spotted the monarch butterfly sipping nectar from a Mexican sunflower outside her home in Vacaville.

Affixed to the elegant orange and black insect’s wing was an adhesive tag the size of a small fingernail that read: Monarch@wsu.edu A6093.

This monarch was from Keatley Garvey’s alma mater, Washington State University, located some 800 miles away. What’s more, two years earlier she had written a story about a monarch study underway at WSU.

Now, one of the study’s subjects was perched on a blossom just four feet away.

“I wanted to do a happy dance or a pirouette,” said Keatley Garvey, a science writer for the University of California-Davis’ department of entomology and nematology who also happens to be an insect photographer and author of the popular blog, “Bug Squad”, and, an occasional contributor to Bee Culture’s covers.

Ever so quietly, she raised her macro zoom-lens camera to her eye and began to shoot.

Later that day, WSU entomologist David James read Keatley Garvey’s email saying that A6093 had lingered in her yard all afternoon.

He recalled how, on Oct. 17, 2014, she had featured his research in a blog article encouraging readers to be on the lookout for tagged monarchs. The story explained that James was spearheading a study in which volunteers were tagging and releasing Pacific Northwest monarchs to track their mysterious migratory paths. (See http://ucanr.edu/blogs/blogcore/postdetail.cfm?postnum=15624)

“I immediately recognized Kathy’s name and it took a few seconds for it to sink in,” he said. “It’s one of the biggest surprises of my research career.”

That’s because, of the 3,000 butterflies tagged and released by volunteers during August and September, monarch A6093 was among them. It had fluttered its way into the yard of a science writer and bug lover who had graduated from WSU and who, decades later, wrote about his research.

A6093 had been released seven days earlier from Ashland, Ore., James determined. The male monarch stopped by Keatley Garvey’s garden to consume enough calories to power the rest of its flight to the California coast to overwinter, he explained.

Weighing less than a dime, “it flew almost 41 miles each day to get to Kathy’s house,” he said.

Two decades ago, roughly a million western monarchs migrated to their California wintering grounds each year. That number has plunged by 70-90 percent, said James.

By tracking their movements, he hopes to better understand where and why their journey unexpectedly ends. This, in turn, could help revive one of nature’s greatest migrations.

Hopefully, Monarch A6093 made it another 100 miles or so to a roosting grove of eucalyptus trees along the Pacific coast. Come March, it will lift off northward. And maybe, just maybe, it will refuel in Keatley Garvey’s garden once again.