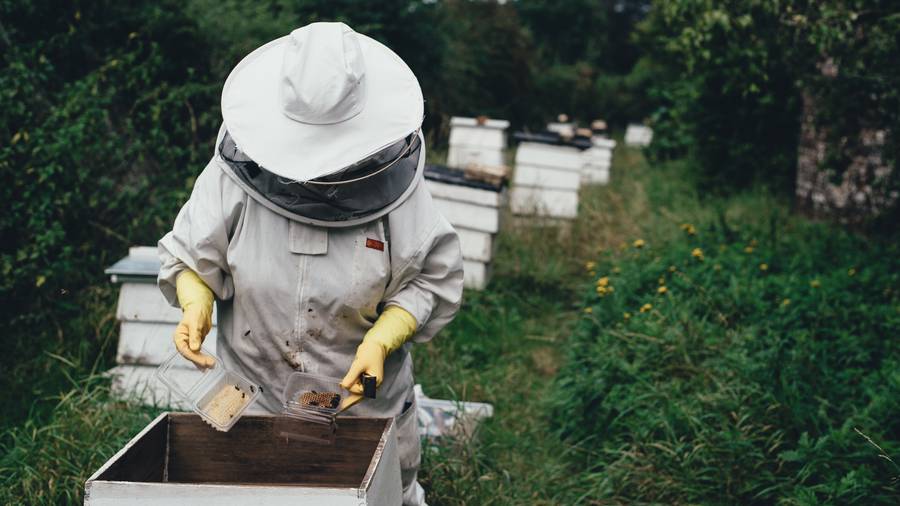 Rachel Rose is a local writer, editor, gardener and beekeeper. Sources (and a whole lot more reading on this topic) can be found at www.facebook.com/rachelrose.writer

See Below for Background Information

THERE’S lots of discussion about whether we have pushed past hard limits in the case of dairy farming, but have we gone past “peak bee”?

The Great Springvale Bee Standoff is back and you’ll see more complaints about bees causing a nuisance in town.

There were 27 complaints made to Whanganui, New Zealand, District Council last year about bees in the urban areas. WDC’s media release last month singled out urban hobbyists with a hive or two on the back lawn, as if the large numbers of commercial hives on the outskirts of the suburbs — particularly over winter — didn’t exist.

Whanganui is a major beekeeping area, thanks to all the mānuka growing on back blocks in our region. It’s lucrative enough that hives are being delivered by helicopter to remote sites; and worth enough to prompt some dodgy behaviour.

There are lots of local beekeepers in this region, many of them with years of experience and longstanding relationships with landowners. Now, high prices mean beekeepers are chasing mānuka flowers across the country, trucking bees long distances.

This is stressful for bees and bad for colony health, not least because an extended diet of mānuka is not good for the bees who collect it! Plus, some believe it’s spreading treatment-resistant varroa, the mites which feast on bee larvae and can quickly overrun a colony.

There’s intense competition for sites, with some large beekeeping companies buying rather than leasing land.

Up the river, I’ve seen small paddocks without a scrap of bee forage on them. But there’s enough room to stack scores of hives, whose inhabitants fly over a fence or across the water into land someone else owns, which is covered in mānuka or bush.

Fences keep stock out, but bees don’t pay a bit of notice.

Some smaller operators are bitter about large numbers of hives being dumped in an area that is already fully-stocked. It means no-one’s hives do very well but companies with deep pockets can afford to ride that out for a season or two if it means securing a long-term profitable site to themselves.

I also learned of a case in 2016 where the forage was all on Māori trust land reverting to bush. Instead of dealing with the trustees, the beekeeper put his hives on the farm next door. There’s not so much as a thistle to forage from in the paddocks on that side of the fence, but that’s where the hives (and the rental payment) went. Meanwhile the bees head straight into the bush.

Unfair? More than a little. Illegal? No.

Because there is no legislation or regulation about size of apiaries, hives per hectare or locating apiaries on sites with sufficient forage to support those hives.

The WDC beekeeping bylaw says hives must be set back 40m from boundaries, roads and public places. That is sensible with regard to keeping people out of the immediate flight path, but cannot influence or control apiaries being established on sites without their own food source.

WDC has followed a number of other city councils in developing a bylaw that permits urban beekeeping, but it’s not feasible to expect local government to develop individual policies to regulate commercial beekeeping. This is particularly so given the ways hives are being moved around the country.

I’m not aware of the previous government showing any interest at all in developing regulations at a national level; quite the contrary. Mānuka exports were viewed as a sweet success story. MPI was talking up massive growth in mānuka honey — from an estimated $75 million in 2010 to $1.2 billion per year by 2028.

And just where are the over-wintering sites and forage going to come from to support that kind of growth? Bees aren’t robots. Their plight is harder to understand than cattle in feedlots or hens in battery cages but the comparisons are not without merit.

Industry self-regulation was supposed to solve any problems, but there’s no sign of that working. The industry is fragmented and highly competitive. It is consolidating; the largest operator runs more than 35,000 hives and 29 big companies control a third of hives. Not all beekeepers see that as a good thing.

The growth of the industry prompted UCOL to develop a certificate in apiculture in Whanganui — I completed the inaugural course in 2016 — and Land Based Training launches its own course next month.

Training more locals makes sense but most of the work is seasonal — and bloody hard work and very long hours. Filipino migrant workers have been filling the labour shortfalls but not necessarily given anything other than the most rudimentary training.

I grind my teeth every time I hear “backyard beekeepers” blamed for the spread of disease or whatever else threatens the industry. The industry needs to look at its own husbandry practices.

Meanwhile, if you care about ethically sourcing food, start asking questions about where your honey comes from.

■Rachel Rose is a local writer, editor, gardener and beekeeper. Sources (and a whole lot more reading on this topic) can be found at www.facebook.com/rachelrose.writer

What Rachel’s Article Is Referring To….

Since 2015 when the Whanganui District Council’s bylaw legalised bee keeping within the City, there has been considerable growth in both hobby and commercial bee hive numbers and a subsequent increase in residents’ properties affected by bee excrement.

Over the past few months my neighbourhood became one such new target with the waxy yellow deposits peppering home windows and walls, drying laundry and vehicles. The deposits stick fast and are very difficult to remove.

Our aerial bombardment followed a commercial bee keeper placing 5 large hives nearby. With 50,000 to 80,000 bees per hive, they could be making in excess of one million flights per day potentially dropping their load soon after each departure.

The neighbours became distressed and perplexed by the ongoing deposits, having no idea what this stuff was or where it came from.

However, having spent 20 years bee keeping earlier in my life I knew all about it and when the neighbours found out they became very angry. There was certainly no hint of amusement.

Bee poop may sound funny, but it is anything but that when it affects ones own property.

And the chance of bee excrement affecting your property is increasing all the time, especially with the mushrooming number of rural and manuka bee keepers placing hundreds of hives near, and even within, the city during the winter where management is easier. In this instance, starving and lethargic bees can present additional nuisance to residents and last year the Rogers Street Kindergarten was also affected.

In our case, I tracked down an enthusiastic young bee keeper. He inspected our neighbourhood and was somewhat distressed when he realised what his little helpers had been up to.

He agreed to remove 3 of the 5 hives. Council officers thought that was an acceptable approach. But the neighbourhood did not, after all, a 60 per cent reduction of an extreme nuisance is still a considerable nuisance, and Section 13.2 in the council’s 2015 Bylaw on Animals, Poultry and Bees, states that “…there shall be no nuisance caused by bee keeping…”

Fortunately we did not need to react further as these particular hives were on a rented property and when the owner was informed and shown their impact he directed all the hives be removed.

Bee nuisance is a growing problem and it seems that the council needs better advice and tools to deal with existing problems and to avoid future conflicts.
ROGER SHAND
Castlecliff