By Charles Rohla by The Samuel Roberts Noble Foundation, Inc. 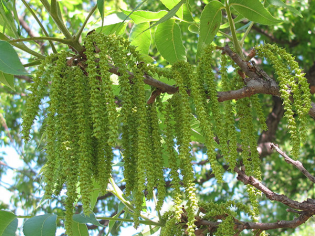 Pecan trees are monoecious, which means both the male and female flowers are on the same tree. Female flowers (pistillate) are located at the end of the current season growth, and the male flowers (catkin) are located at the end of last season’s growth. Catkins are easy to spot as they dangle from the tree during the early spring. A single catkin can produce as many as 2.64 million pollen grains. Only one pollen grain is required to produce one pecan. One catkin can produce enough pollen to pollinate flowers to produce 50,000 pounds of average-sized pecans. An average bearing tree is likely to produce several thousand catkins, thus further emphasizing how much pollen could be produced.

Self-pollination is controlled through two types of flower maturation. In type I (protogynous) trees, the pistils mature first before the stamens shed pollen. In type II pecans (protandrous), the opposite is true with stamens shedding pollen before pistils mature. With the separation of stigma receptivity and pollen shed, self-pollination is limited.

Adequate pollinators within the orchard are imperative for optimal production. The first step to ensure adequate pollination is to determine what varieties will best pollinate each other. It is not as simple as planting a combination of type I and type II varieties to pollinate each other. We must determine if the pollination of the different varieties are best suited for a specific variety. Choosing a pollinator is usually accomplished through the use of a pollination chart. These charts list the pollen shed and pistil receptivity times of the major varieties. It is recommended to find at least two to three varieties that shed pollen at the same time the main variety is receptive.