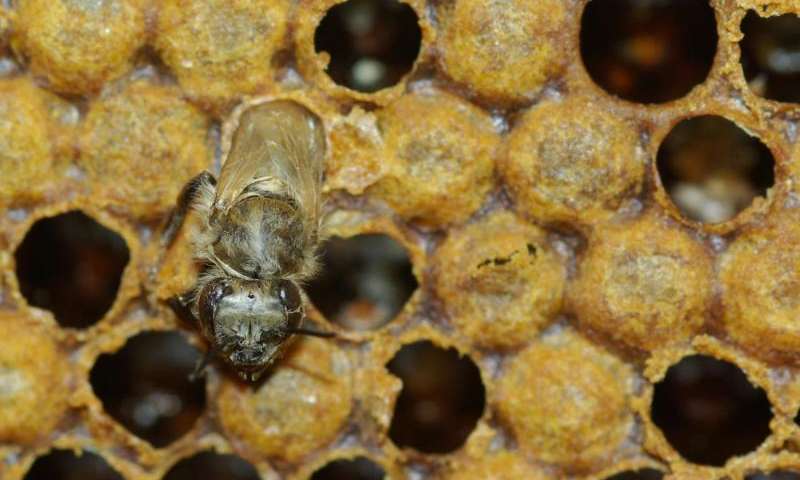 A young honey bee worker emerging from the cell in which it developed. Credit: Vincent Dietemann, Agroscope

In honey bee colonies, a single queen is laying eggs from which thousands of worker bees are born. At a young age, workers care for the brood, then build and defend the nest and eventually, towards the end of their lives, leave the safety of the nest to forage for food. This major step in their lives is speeding up ageing because searching the environment for food exposes these foragers to a wide range of stressors, such as pathogens, predators and adverse weather conditions.

Despite her title, the queen is not deciding who does what in the honey bee colony. How work is distributed between nestmates in these societies is not fully understood. Previous research has shown that tasks are allocated based on communication between the queen, brood and individual workers performing these tasks. For example, the presence of foragers in hives reduces the number of younger bees leaving the hives to start foraging. It is also known that the presence of larvae reduces the life expectancy of bees due to the need for adult workers to tend to them and forage to feed them. This was shown by an increase in longevity of workers after experimental removal of larvae. Since their removal also resulted in the removal of young adults that develop from them, the observed effect could not be attributed to the young workers or to the brood until now.

‘By experimentally separating the effect of brood and of young adults on their nestmates’ destiny, we could tease apart the role of these two actors’ says senior author Vincent Dietemann from Agroscope. ‘We saw that both the presence of brood and of young workers shortened the life expectancy of their nestmates’ adds lead author Michael Eyer from both Agroscope and Institute of Bee Health. The newly discovered role of young workers in honey bee social organisation adds to our knowledge of how demography shapes colony functioning. ‘These social regulation mechanisms of food collection allow the fast adaptation of the colony to a changing environment’ says co-author Peter Neumann from the Institute of Bee Health.

These findings are significant for our understanding of social organization in insects, which often inspires technological innovations. They also provide information on general ageing processes beyond social insects. Indeed, honey bees are used as model system to understand ageing in other organisms, including humans. The acquired knowledge has practical implications for beekeepers because colony management can include removal of brood and thus of young workers. This for example can occur before a treatment to control the parasitic mite Varroa destructor. The extension of worker lifespan induced by the removal allows the colony to compensate this absence and continue functioning.

In spring and summer, honey bee colonies are composed of so called ‘summer bees’. During the first one to three weeks, they perform tasks such as nursing and cleaning within the nest and later leave its protection to forage for nectar and pollen required for colony growth, before dying. In late summer, falling temperature reduces foraging activity and brood rearing declines. The so-called long-lived ‘winter bees’ emerge from the last brood reared. Their tasks consist in maintaining the nest at temperatures that ensure the survival of the colony over several winter months and in resuming brood rearing in the next spring, before they start foraging again in spring. Worker life expectancy is thus plastic and varies according to each phase of a colony’s life history.

In addition to producing honey, wax, propolis and royal jelly, honey bees contribute to the pollination of a large variety of commercial food crops – a service valued at over 150 billions Euros globally. Moreover, honey bees together with other insects pollinate many wild flowers and are therefore central to the functioning of terrestrial ecosystems, of which the economical value is order of magnitudes higher.