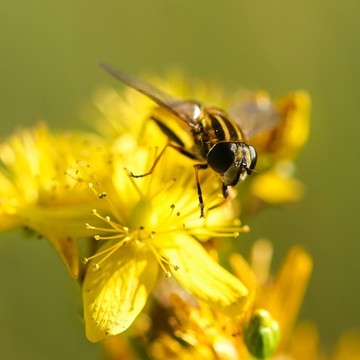 A researcher at the University of Bayreuth in Germany has found a fascinating example of plants being deceptive to ensure that they are pollinated — and it is thanks to the help of gas chromatography with electroantennographic (GC-EAD) and mass spectrometry (GC-MS). So, let’s look at the deceptive plants and find out how chromatography helped.

Pollination is simply the transfer of pollen from the male anther to the female stigma — an essential process in the fertilization of many plants. Some plants are self-pollinating and don’t need a bee or other insect to transfer the pollen. But many plants do need a little help from nature in the form of a pollinator. The most widely known pollinators are bees, and they are also one of the most important pollinators for plants that we use and eat — which is why the decimation of bee colonies is causing so much concern.

To ensure their survival, some plants actively attract pollinators through various methods, not just relying on their attractiveness to the pollinator. For example, some plants send out chemical signals when they need to be pollinated — attracting the right insects at the right time of year. But some plants are not content to let nature take its course and actively practice the dark art of deception to make sure of their survival.

Annemarie Heiduk, a researcher at the University of Bayreuth, has been investigating one plant — Ceropegia sandersonii, Sanderson’s parachute flower — that lures and traps carnivorous flies to make sure it gets pollinated. The flies it lures are Desmometopa — a fly that feeds on honey bees.

The flies don’t hunt the honey bees themselves, — no, they wait for spiders and other insects to kill the honey bees. The flies can detect chemical signals — alarm pheromones that the bees give off as they are attacked. They can then join in the party and feast on the honeybees along with the original predators. The flies are known as kleptoparasites — animals that steal food from the predators.

Deception and lies with Ceropegia sandersonii

To attract the flies, the parachute flowers release a fragrance that mimics the scent of dying honey bees. Irresistible to the flies, which are attracted to the flower but they find no bees — instead, the flies find themselves imprisoned in the flowers. Because the flowers have nothing to offer the flies, no food or nectar, the flowers are known as ‘deceptive flowers’ and they trap the flies for 24 hours, coating them in pollen, before releasing them. The flies, now hungry, are attracted to other parachute flowers mimicking dying honeybees transferring the pollen and completing the pollination cycle.

Heiduk used GC-MS to analyse the scent of the pollinators and GC-EAD to analyse which scents the flies were attracted to. Gas chromatography is commonly used to analyse fragrances and other aroma samples as discussed in the article, Sample Preparation Options for Aroma Analysis.